The Democrat and former Boise School Board member says education is the most important thing we do for our kids. 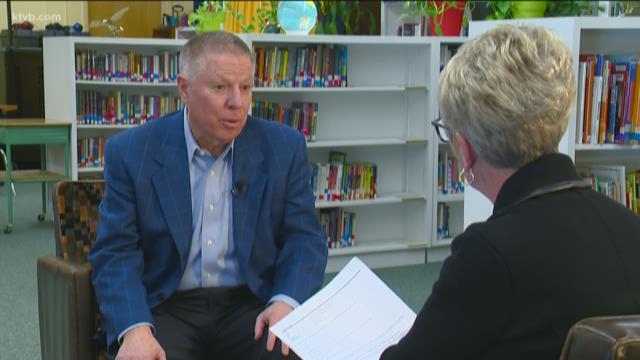 BOISE — All this week KTVB is profiling the five candidates running for governor in Idaho. They are all vying for their party's nomination in the primary election May 15: Lt. Gov. Brad Little, Congressman Raul Labrador and Boise businessman Tommy Ahlquist for the Republican nomination, and for the Democrats longtime Boise School Board member A.J. Balukoff and former North Idaho legislator Paulette Jordan.

We gave all the candidates the opportunity to choose the location for our interivew, and Balukoff chose Hillcrest Elementary in Boise. Until recently Balukoff was a member of the Boise School Board, a position he held for over two decades. He says education is the most important thing we do for our kids - and it's the centerpiece of his campaign for governor.

He says, "The biggest problem I see is that we don't fulfill the constitutional mandate to provide that general uniform and thorough education all across our state. We have bright spots where great things are happening."

Balukoff wants to see those great things replicated more often, and explained that a better sharing of ideas will make that happen,

"Well It can't be a top-down mandate. People resist change, they resist being told what to do, but you can share ideas that work in other districts and tell the story and present it in a way that a district will say, 'Gosh, I wonder if we could do that here.'"

He also wants more help for rural school districts, and more money, beyond the current career ladder, for teacher pay. He believes Republican lawmakers' current effort to cut taxes is derailing an opportunity to fund those goals and more.

He says, "Rather than immediately go to tax cuts, as our revenue grows naturally we should be looking at what do we need to spend the money on, what do we need to do better and unfortunately it doesn't seem to me like our Legislature is doing that. Those are the kinds of conversations we have to talk about - do we really need a tax cut?"

Medicaid expansion is another area where Balukoff differs with the Republican dominated Legislature, saying, "You know we could save the counties, and our state lot of money by expanding Medicaid. The federal government will return our federal income taxes and pay for 90 percent of that expansion, which would then allow people to have a medical home."

Balukoff contends the state needs a democrat in the governor's office, and despite disagreeing with Republican lawmakers on most issues, he has confidence in his collaborative style to pull the two sides together.

Balukoff said, "I define myself as a moderate common sense pragmatic kind of a person. I'm looking to bring people together. I don't believe the conservatives have all the answers, I don't believe the liberals have all the answers but we can get to the best answer if we can come together and meet where we have common ground - that's how I would define myself."

When asked if he's optimistic about Idaho's future he said, "I'm optimistic by nature. I think people mean well and want to do what's right, and I think as we have these discussions we'll be able to come up with solutions that will help Idaho be even better than it already is."