A Republican candidate says Democratic Rep. John McCrostie stole campaign literature and then lied about doing so while being recorded. 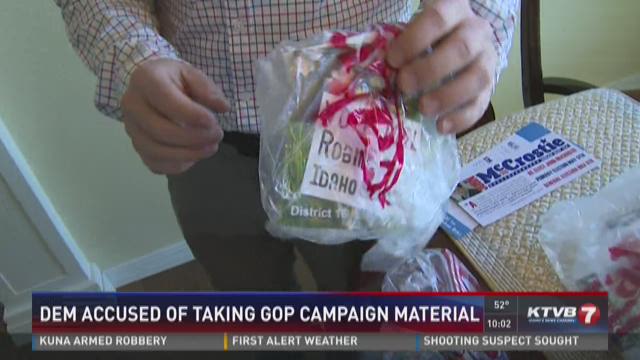 BOISE - A Republican candidate says Democratic Rep. John McCrostie stole campaign literature and then lied about doing so while being recorded.

First-time GOP challenger Ryan McDonald, who is running for a Senate seat in District 16, says he was campaigning in Garden City last week when he saw McCrostie also out going door-to-door.

McDonald decided to approach McCrostie after noticing the Democratic incumbent was carrying the same campaign plastic bags McDonald had just dropped off at homes.

According to the audio recorded by McDonald, McCrostie initially denied stealing any opponent's campaign material. When McDonald then explained he was McCrostie's opponent, McCrostie offered to give back the campaign materials and said "it's part of the game."

McCrostie said in a statement Friday evening, "I made a mistake and I apologize to my family, my supporters and the people of District 16. I have worked diligently for my community for decades, and I pledge to hold myself to a higher standard. I continue to work to ensure that Idaho invests in education, grows small businesses and that all Idahoans have an equal opportunity to succeed."

Assistant Minority Leader in Idaho House of Representatives, Mathew W. Erpelding (D) told KTVB, "I believe that campaigns with opposing views should each have the opportunity to have their message heard. My volunteers and supporters are trained to be respectful and transparent about my opponent and his message."

Minority Leader John Rusche (D) said McCrostie needs to have a fair chance to get his side out.

As far as the allegation goes, Rusche said he didn't know anything about it earlier, and adds he knows McCrostie and knows he is a "fair man." Rusche believes these sorts of things don't belong in local politics.

McDonald has filed a report with the Garden City police department.