The Idaho secretary of state has certified that the initiative will be on the Nov. 6 ballot. 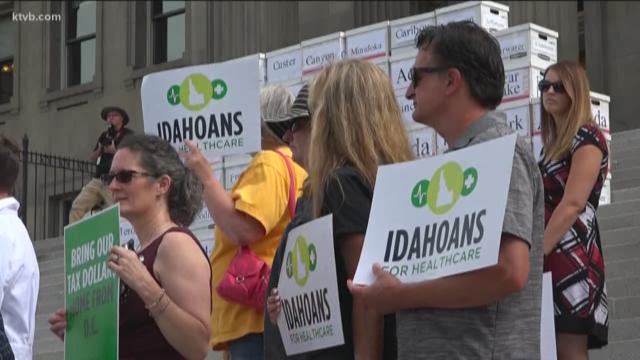 BOISE — The Medicaid Eligibility Expansion Ballot Initiative will be on the ballot in November.

Earlier this month, campaign organizers dropped off dozens of boxes filled with petitions to be verified as legitimate.

"It's not that we had any doubts about it when we turned them in, but it's an overwhelming happy feeling that it's been certified," said Tracy Olson, Ada and County counties co-leader for Reclaim Idaho. "It's a really great feeling to know that we can move on to the next step of getting voters to vote for it."

"It's been turned into a political football and that was really unfortunate," said Rep. Christy Perry, R-Nampa. "While people were playing political football Idahoans were watching their friends and neighbors get hurt and die because of lack of healthcare. That's really where Idahoans stood up and said that's not what we want out of our state."

Idaho Secretary of State Lawrence Denney announced Tuesday that his office has officially certified that the Medicaid expansion campaign was able to gather enough valid petition signatures to get the issue on the Nov. 6 general election ballot.

"In the previous years, it's been up to the legislature and the people have been able to apply just a little bit of pressure on their legislators to get it passed, but this year, the power has gone to the people and putting it in their hands to vote yes," Olson said.

"I think this year is different in the sense that people overall are feeling empowered to have a voice in the political process and feel like this is an issue that speaks to everyone," Olson said. "We all know someone who's effected by either a lack of healthcare or health issues."

If the measure passes in November, it would extend health coverage to 78,000 uninsured Idahoans, those in the so-called "health care coverage gap" who make too much money to qualify for Medicaid and too little to be eligible for a tax credit through the state insurance exchange.

To pass, voters will have to vote "yes" by a simple majority.