There is no runoff policy in the city, but after disgraced former state lawmaker, John McGee, won the race, many are calling for one. 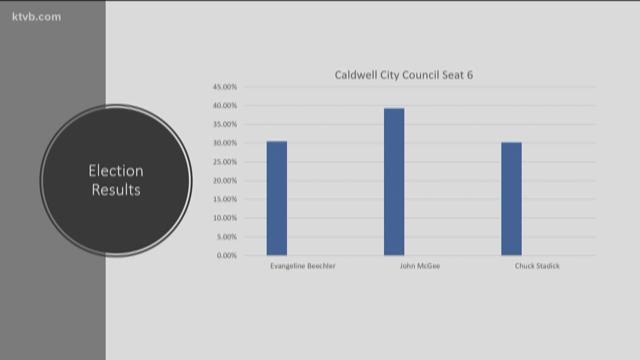 Despite no runoff policy on the books, a group of citizens in Caldwell is requesting one following the election of John McGee to City Council Seat 6.

McGee, a former state lawmaker, resigned after misconduct allegations in 2012. On Tuesday, McGee won with 39% of the vote, which has led to calls for a runoff.

Since he didn't gain more than 50 percent, a true "majority," the city is working to define "majority."

Evangeline Beechler pulled in the second most amount of votes in the race. She secured 30.55% and the incumbent pulled in 30.21%.

Her campaign released a statement that read,

“It feels important to ensure transparency as we navigate this unexpected bump. I am thoughtfully and diligently working with my team and legal experts to figure out next steps to ensure we quantify what is in existing city code. If the law requires a runoff, it potentially means city code hasn’t been followed for up to 30 years when ordinance 1830 was signed into law by the mayor of Caldwell in 1989. Caldwell residents need to be reassured that their city leaders are following the law. I hope we find resolve soon. We should also thank the brave Caldwell residents for bringing this to everyone’s attention and holding everyone involved accountable.”

Secretary of State Lawrence Denney told KTVB his office isn’t involved with this election since it’s municipal. He added however, he will support whatever decision Caldwell comes to.

Caldwell is currently reviewing the election; however it is taking longer to reach a conclusion then the city anticipated. In an email to KTVB, the city said legal counsel fully expects to reach a decision by the end of the day on Friday, Nov. 8.

In a statement to KTVB, McGee said, "We are satisfied with the election results and do not expect legal issues to arise.”