Republican Sen. Fred Martin of Boise is asking the "Freedom Man" PAC to retract a mailer sent out to voters. 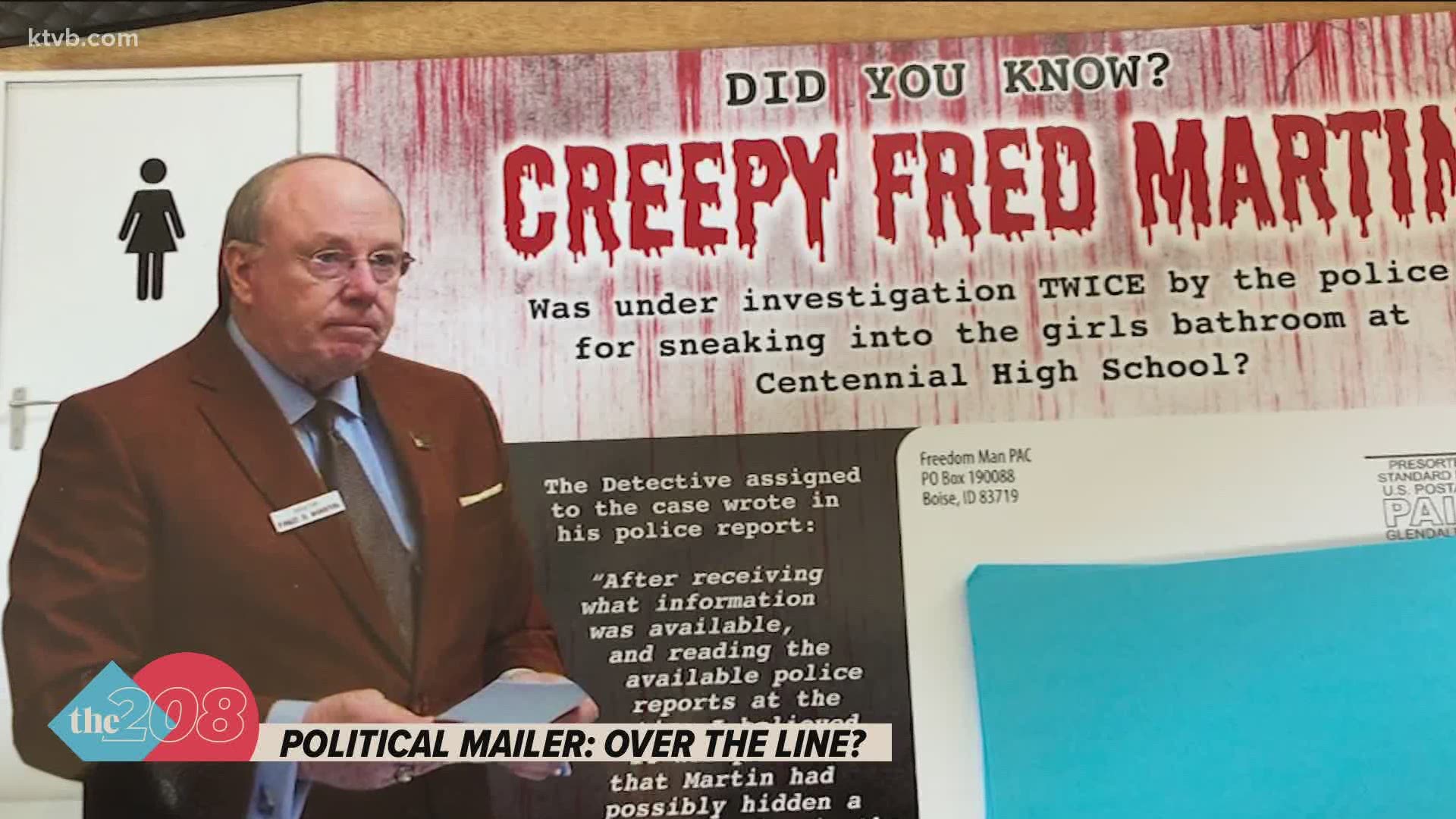 The mailer, sent by the Freedom Man PAC, labels the incumbent Republican senator who is up for re-election next month, as creepy and includes excerpts from two Boise Police reports involving Martin.

Those reports stem from 2012 and 2014 when Martin was questioned about visiting Centennial High School at night after school hours. Martin was never charged with anything relating to those reports.

The excerpts on the mailer from police reports detail a 2012 allegation that Martin went into a girls' bathroom inside the high school. The mailer is also posted online.

Boise Police confirms that police reports from 2012 and 2014 posted on the PAC's website are authentic.

Sen. Martin’s attorney Dave Leroy says the mailer is a falsehood created and issued with malice.

“The allegations and the attack leave out entirely the context that the senator went to see the end of evening basketball games where his niece, as a visiting basketball player, was in the building at a game," Leroy said. "The loss of that context to suggest that he is inappropriately in or around a high school in the evening is where this attack begins to create falsehoods."

Martin said in a 2012 interview with police he did not go into the bathroom but merely looked in to find someone to ask about the score of the basketball game. In the report, an unnamed custodian at the school says he saw Martin behind a privacy wall inside the bathroom.

The 2012 police report was filed as informational only.

In 2014, Martin was questioned by police after being seen at Centennial High School late at night.

An investigator in a 2014 report said, based on the 2012 report he had at the time, he believed it was possible Martin had hidden a recording device inside the school.

That quote was included in the mailer; however, the mailer leaves out the result of that investigation.

Leroy says no device or any wrongdoing was ever found.

“The police were very aggressive in checking to see if there was any kind of issue, or allegation, or crime committed by anyone who was in or around that restroom after hours," he said. "The senator denied that it was him and they found no such device."

Martin told police in 2014 he was notified by two people that he was under investigation in relation to the 2012 incident. He had previously thought the matter was complete. Martin told police he went to the school in 2014 to check on claims made against him in the 2012 report.

The 2014 report concluded there was suspicious behavior, and inconsistent statements made, but no criminal activity found. Leroy points out that final finding is not included in the mailer.

“To fail to put in the bottom line of the report which says that the police officer identified no criminal activity that was prosecutable, and the investigation would be closed is, of course, malicious and false,” he said.

Leroy sent a letter to the Freedom Man PAC demanding a retraction and warning saying the mailer and information online is defamatory.

According to Leroy, this is clearly a malicious attack by the Freedom Man PAC ahead of the election.

“One of the problems when you make a personal attack against a politician, particularly late in a campaign, is there are very few opportunities to correct those allegations," he said. "What we did demand was that they remove the offending material from their website and that they send out a second mailer to each and every person that got the original mailer, apologizing and retracting the false allegations."

On Tuesday, Martin’s opponent in his District 15 senate race - Democrat Rick Just - issued a statement to make it clear his campaign was not involved in the mailer.

“I want to reiterate that Senator Martin isn’t suing me or my campaign. He knows we had nothing to do with it,” Just said. “Idaho voters don’t benefit from name-calling and mudslinging campaigns.”

KTVB reached out to the Freedom Man PAC for comment on the story Tuesday morning, a spokesman was not available for an interview but provided the statement below:

"The reason for the Freedom Man PAC sending out the mailer regarding Fred Martin is very simple—Fred has been a terrible and disgusting legislator since the day he took office and he needs to be removed.  Unfortunately, district 15 voters keep voting for him.  This story we published about his “creepy actions” regarding the incidents that took place at Centennial High School and the girls restroom were quite intentionally suppressed from the public.  You can read more about how and why it was suppressed by reading the actual police report.

So, our point and purpose is simple—to expose corruption, promote liberty, and shine the light on our legislators (both good and bad).  This information about Fred was suppressed and hidden, so we purposed to simply publish it, and that’s it.  I personally, even gave Fred an opportunity to clarify in advance.  He, of course, did not.  He simply made false claims about the incident being investigated by others who all claimed “it never happened.”  I contacted the majority of those he claimed said it “never happened,” and not a single one of them would corroborate his story.

As to why it is being published now and not way back when is simple—I barely found out about it a few months ago.  Think about that level of news suppression!  I personally was a candidate who ran against Fred Martin back in March of 2014.  This last incident with Fred, which was investigated by police and subsequently suppressed from the public eye, took place in January 2014.  How is it possible that I was never told about this BY ANYONE until June 2020?  I then had to further investigate to certify the veracity of it all.  And finally, our PAC got a hold of the original police reports (which we have now published online).

Quite frankly, I am under no delusion in thinking that Fred will lose his seat because of the fact that he’s been exposed.  On the contrary, those around him, particularly those in his stake, will rally around him, like they always have, and DISREGARD ALL FACTUAL EVIDENCE against him and vote for him anyway.

But my conscience and those of the staff at the Freedom Man PAC won’t allow us to know these facts and not publish them.  We can’t stand before God with clean hands, when we know we acted like a “dumb dog that would not bark” (Isaiah 56:10) and instead sat back and did/said nothing while evil men continued in power.