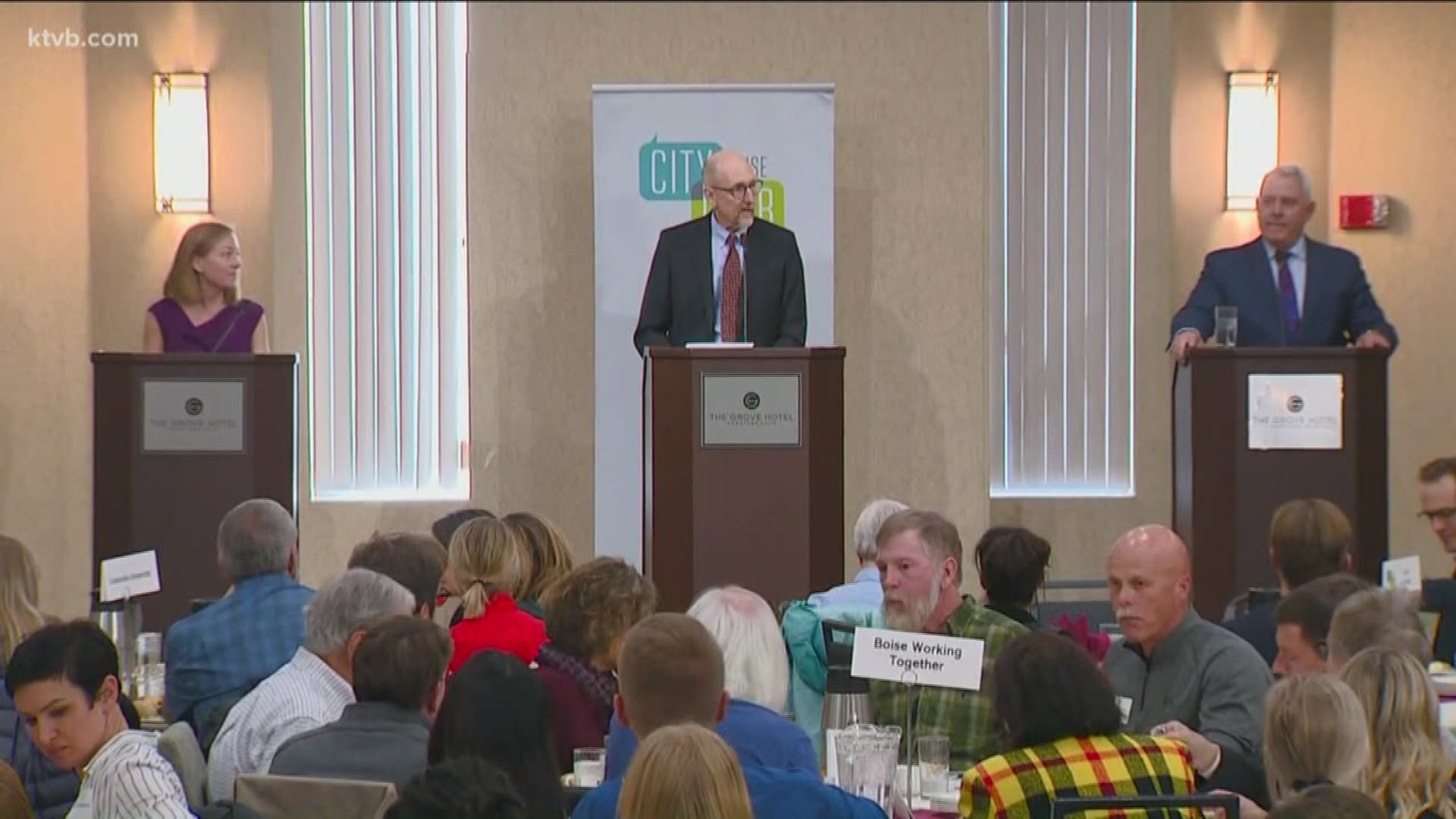 BOISE, Idaho — The two remaining candidates for Boise mayor faced off Tuesday on topics including the stadium and library projects, homelessness and affordable housing as part of a public forum hosted by the City Club of Boise.

None of the seven candidates secured the 50 percent plus one of the vote needed to win outright on Election Day, pitting the top two against each other in the runoff election. McLean came the closest with 45 percent of the vote, while Bieter received 30 percent.

Growth was a recurring subject at the forum, with both candidates acknowledging Boise's current problems with affordable housing and rising property taxes.

Bieter pointed to his Grow Our Housing initiative and the recently opened 134-unit Adare Manor development in downtown Boise, which provides low-income and workforce housing, as examples of recent successes in tackling the problem.

"That is our model to take city property as often as we can, private property and lower the cost of housing," he said. "With the financial community stepping up to talk with us, we're going to leverage everything we have to make affordable housing all across the city."

Bieter said solving the crisis is "a tough lift," but insisted it was crucial to continue to green-light additional housing in Boise.

"We have to approve dense, multi-use, walkable, bikeable communities," he said.

McLean said the housing issue has come up over and over again in her conversations with residents.

RELATED: 'The voters have spoken': Boise mayor calls for a pause on library project

"I have heard from thousands of people that we are experiencing an affordability crisis," she said. "You're concerned that your kids won't come back here because they can't buy a house, that you might have to move when you retire because property taxes have gone up."

Improving transportation is a key part of that conversation as well, she said.

"We need to protect open spaces as quickly as we are developing and we have got to have real conversations about the urgency of  this affordability crisis that we are experiencing, the impact low wages have on that, and the tools we ought to be trying to create: People-scaled housing, faster and better and quicker for our residents," she said.

On the topic of homelessness, McLean said she does not support homeless encampments. The city should "lead with Boise values" when it comes to working toward a solution, she said.

"I know that we can do better," she said. "Saying we have to throw people in jail, write them tickets - we have to ask ourselves, is that going to keep them off the streets?"

But Bieter argued that Boise is already a model city when it comes to handling homelessness, and defended his decision to dismantle the Cooper Court encampment in 2015.

"The toughest decision I've ever made was to take down that camp," he said. "I lost friends, I lost more sleep than you know. But that's what being mayor is about."

Without enforcement, the mayor warned, Boise could be dealing with the same issues surrounding homelessness that have affected Seattle, San Francisco and Portland.

"You cannot have it both ways," he said.

A question about the proposed stadium project led to some tense moments during the forum. McLean said she supported the project early on, but later changed her mind after hearing citizen concerns.

"We've heard about the stadium for 16 years. The needs of the city have changed drastically," she said. "There are so many things like housing and transportation that our residents expect us to spend city dollars on before we do these other large legacy projects."

Bieter fired back, arguing that part of being a mayor was about looking out for the "long-term best interest of the city" and denying that he considered any city product his legacy.

"My legacy is my daughter. That's the only legacy that matters to me," he said. "I make tough decisions for the future of the city, the city I was born and raised in."

In their closing statements, both Bieter and McLean touted the importance of listening to the people of Boise.

"We all care deeply about this community, but we all recognize there are tough challenges ahead, because of the progress we have made," McLean said. "You're asking for leadership to listen to you, to share her vision with you, and to link the two together."

She vowed to work to find solutions to the housing and transportation issues citizens have told her are important to them.

"I have heard you and I carry your stories with me, and if I have the honor to earn your vote again on Dec. 3, I will carry them with me into the mayor's office," she said. And I know that our best days are ahead."

Bieter said he has "been listening since the first day" in office, and touted Boise's cleanliness and low crime rate. It is important to maintain those qualities for future generations, he said.

"This is a fragile situation folks," he said. "It could turn on a dime, we've seen this all around the country."

Bieter said that he is poised to make the difficult decisions if re-elected.

"It's an honor to be the mayor, and I've treated it like this every day," he said. "I want to continue forward and make a great city better."

If you missed any of the live stream of the forum on KTVB.COM or KTVB's YouTube page, you can scroll down to watch individual segments from the forum and Joe Parris' live blog of the event.

RELATED: 'The voters have spoken': Boise mayor calls for a pause on library project