Garrett Nancolas has been elected six times since 1997 and is the longest-serving mayor in the city’s history. 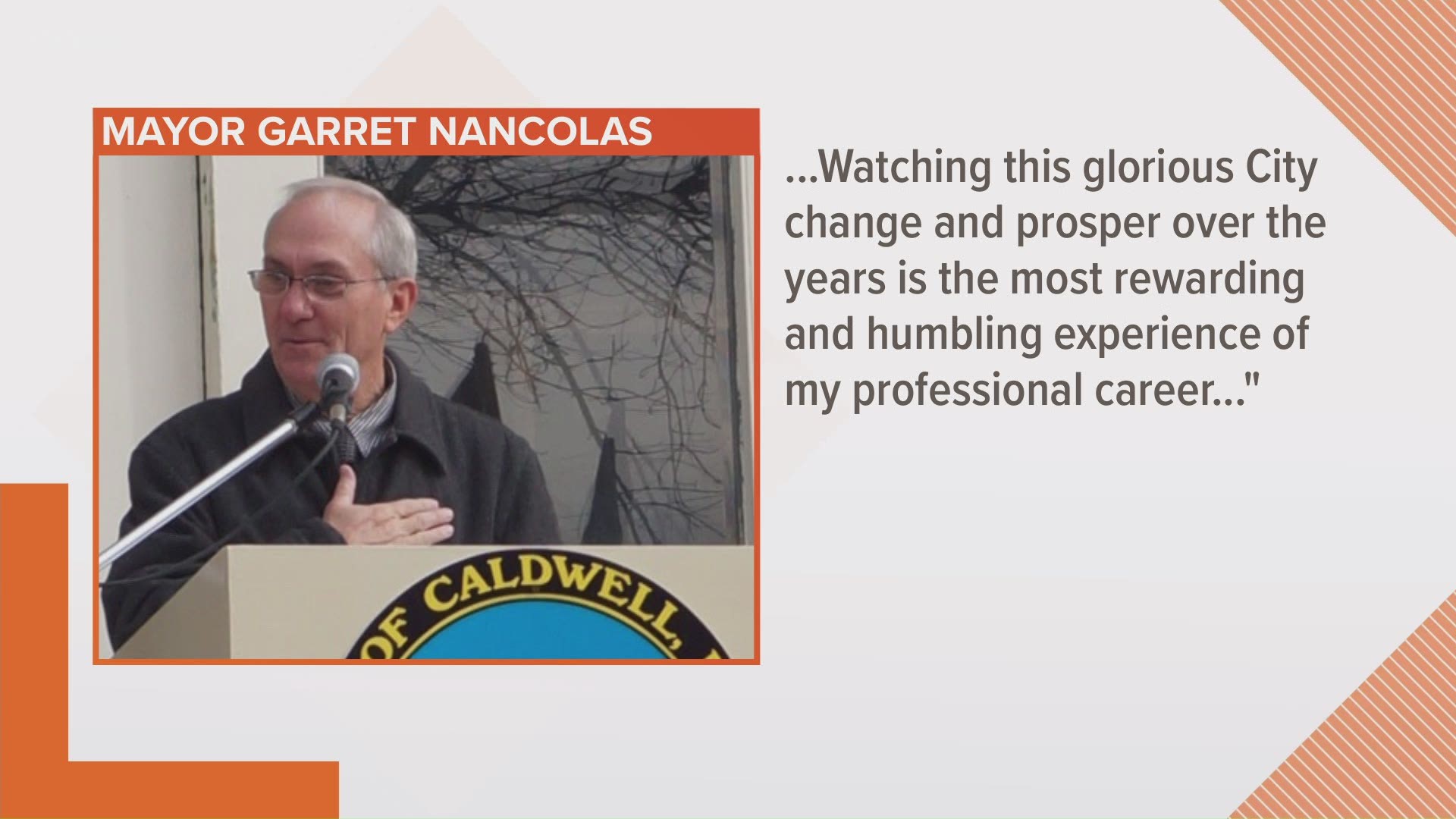 CALDWELL, Idaho — Editor's Note: This article was originally published by the Idaho Press.

After more than 23 years as Caldwell’s mayor, Garret Nancolas announced Friday he won’t run for re-election in November.

Nancolas, 64, has been elected six times since 1997 and is the longest-serving mayor in the city’s history. He won his most recent election in 2017 with 75.41% of the vote. He decided he wants to spend more time with his wife, two children and two grandchildren.

“I love what I do, but it’s very demanding timewise,” Nancolas said. “There’s lots of evening meetings, there’s lots of weekend meetings. It’s a very, very time-consuming position, which is expected in a position like this. It’s nothing I didn’t expect, but it’s just that time goes by too fast. My grandchildren are growing up before my eyes and my children are getting older and my wife and I need to spend more time together.”

Nancolas has lived mostly in Caldwell since he was a child. Since becoming mayor in 1998, he emphasized families in his decision-making. As he reflected Friday, he highlighted work with the city’s youth, revitalizing its downtown and bringing jobs via the industrial park.

“It’s an experience I will treasure forever,” Nancolas said. “Caldwell is my home. Watching it prosper and grow has been a tremendous and humbling, rewarding experience. Working with people, that’s probably the biggest thing. I’ve met some amazing people.”

Nancolas is proud of forming the Mayor’s Youth Advisory Council and the Youth Master Plan. He said he’s also enjoyed helping revitalize downtown and watching the city “come back to life.” Along with increasing business opportunities, Nancolas feels all these efforts “made a really good place for families.”

Prior to serving as mayor, Nancolas was a Planning and Zoning member for two years and spent eight years on the City Council.

“Just watching Caldwell return to its place as the treasure of the valley,” Nancolas said, “that’s been a tremendous experience and rewarding experience for me to watch the transformation.”

Nancolas’ term will run into January 2022 before a new mayor steps in for the first time in 24 years.

Nancolas isn’t sure what’s next other than having more family time. He said he isn’t retiring, though, because he feels he has more left in his life to accomplish.

“I plan on being busy with my family and we’ll just have to see what doors open and which ones I may or may not walk through,” Nancolas said. “I think I’ve still got a lot of energy and desire to continue to work for this community and this city.”