Thousands converged for the George Floyd protest that was peaceful for most of the day in Spokane. 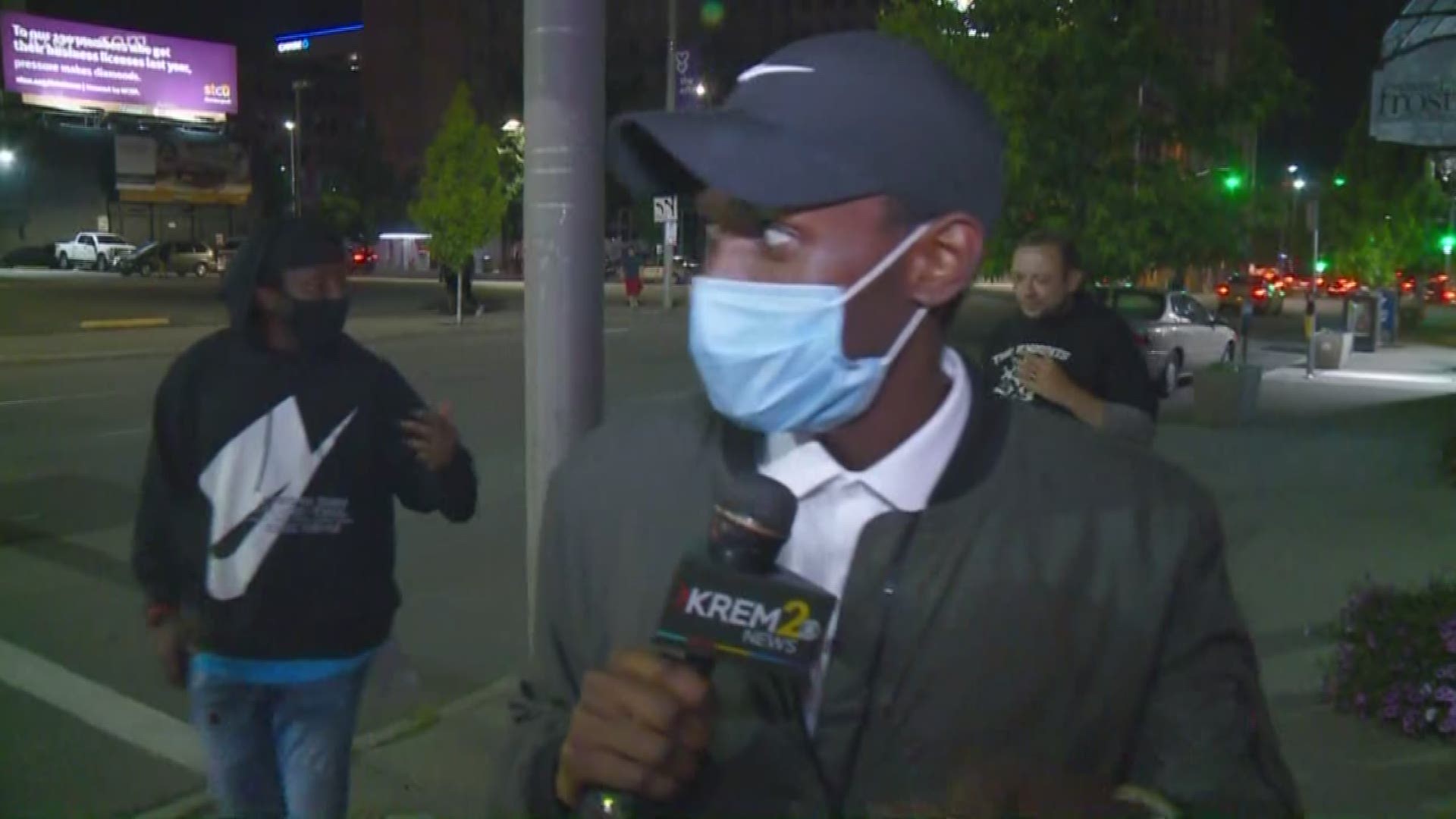 SPOKANE, Wash. — Thousands of people gathered in downtown Spokane on Sunday afternoon to protest a police officer killing George Floyd in Minneapolis on Memorial Day.  The protest is one of many happening this weekend nationwide, many of which have evolved into chaotic scenes.

The Spokane protest was peaceful for several hours before the a second group showed up downtown, and demonstrations turned violent, as they clashed with police. Spokane police fired tear gas at demonstrators, while some people reportedly looted stores and smashed business windows.

This is what we know. This story will be updated.

RELATED: World alarmed by violence in US; thousands march in London

The Joint Information Center wrote "Due to last night’s sad and unfortunate criminal acts following the completely separate peaceful protest downtown, the Community Screening Site is closed today. Hopefully, testing will resume tomorrow as scheduled. Thank You, and we apologize for any inconvenience."

The city of Spokane has begun cleanup efforts and transit buses have started their regular routes after a group wrought chaos on downtown late last night.

Due to the curfew in placed in downtown Spokane overnight, Spokane Transit has delayed the start of bus service until 7:00 a.m. All routes will begin to resume at that time.  The Plaza will open at 7:00 a.m. Paratransit service will begin at its normal time, but will not enter the exclusion area until 7:00 a.m.

The city wide curfew has expired.

The Spokane County Campus will be closed Monday "due to the outbreak of one of the most disruptive outbreaks of civil disobedience in recent history," according to the Spokane County Public Policy and Communications Manager Jared Webley.

“This violence is NOT the result of the peaceful protests conducted this afternoon out of concern for the loss of life of George Floyd," said Spokane County Commissioner Al French. "This disruption is an opportunistic disruption conducted by anti-government elements which include ANTIFA and other groups. Out of concerns for the safety of our employees, I’ve instructed our CEO to shut down the County for all business on our downtown County campus for Monday, June 1.”

Governor Jay Inslee ordered a statewide activation of the National Guard, due in part to Spokane County's request.

Sheriff Ozzie Knezovich: "This is not our African American community"

"I have requested the national guard. That request is being processed right now," he said.

Knezovich said he had "a lot of great conversations" with protesters during the day before clashes began this evening. He said according to social media, he believes protesters plan on "doing this for 24 hours."

Social media tells us they plan on doing this for 24 hours.

Said he had a lot of great conversations with protesters today before the protest turned violent.

"These people have hijacked this event today and they have disrespected our African American community," he said.

Knezovich said George Floyd's death at the hands of a police officer is "inexcusable."

The Spokane Transit Authority delayed all transportation until 6:30 a.m. due to the protest.

The Spokane County Courthouse will be closed on Monday.

Curfew issued, Sheriff calls in National Guard: "We will arrest as many people as possible"

"This is not Spokane. This is not who we are," Woodward said. "We are seeing looting at several businesses, we are seeing several individuals who are refusing police orders to disperse."

The mayor issued a curfew for Spokane for downtown Spokane until Monday at 5 a.m.

"In order to disperse people from downtown, give everyone a chance to cool down, Spokane Mayor Nadine Woodward has enacted a curfew beginning immediately until 5 am Monday," the mayor's office said in a statement.

Some protesters told KREM 2 they were hit with tear gas while peacefully protesting. Video from the scene shows a few protesters throwing projectiles at police.

Area police departments are assisting Spokane police as they work to disperse protesters.

Spokane Sheriff Ozzie Knezovich called in the National Guard to assist with protest.

"We will arrest as many people as possible," Knezovich told KREM 2.

Knezovich said he plans a press conference around 10 p.m.

"A civil disturbance is occurring in the downtown Spokane area. Please avoid the downtown core area," the alert said.

Protesters and Spokane police continued to clash, with police deploying rounds of tear gas and other non-lethal weapons.

The protest up until this evening was peaceful, with thousands of protesters gathering in areas near downtown, chanting, and marching through streets.

Video from the scene shows protesters fleeing near River Park Square in front of a cloud of white smoke.

KREM's Taylor Viydo said police appeared to be attempting to disperse protesters with the gas. It's unclear whether anyone was warned in advance.

A window was also broken at a store, according to KREM's reporter on the scene. 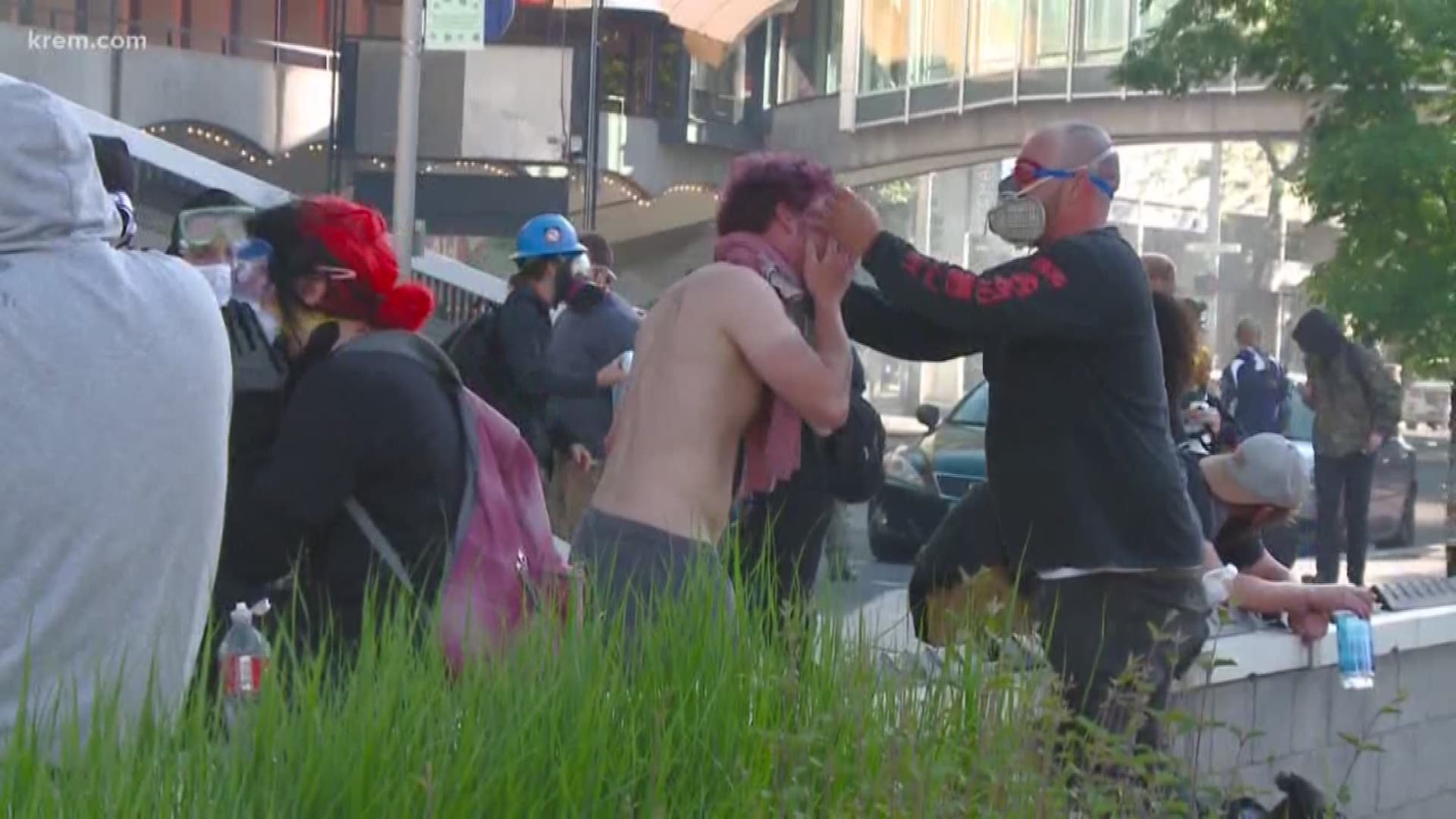 "I think Spokane set a very powerful example today, about how a community can peacefully and respectfully come together to support each other and the nation when we are hurting" Woodward said. "Those of us cannot begin to understand the depth of anguish and anger caused by the inexcusable actions in Minneapolis. We stand with those across our city and our country in saying we have to expect and we have to do better as a nation"

"Our law enforcement did a great job today, and continue to this evening, helping our community exercise their first amendment right, and joining the national conversation that is happening right now," Woodward said. "The memorable moment was an officer taking a knee in solidarity with those protesters today at the court house. That is something - I'll never forget that."

Protesters were still active in downtown Spokane according to KREM 2's Taylor Viydo. Some were blocking traffic at the intersection of Wall and Spokane Falls blvd., however many have since moved to the sides of the street.

Some businesses downtown did close, including the Apple Store which put up wooden barricades.

Protesters who spoke with KREM 2's Brandon Jones who urged others to stay peaceful, and call attention to racism and police brutality.

"If we don't want this thing that we're doing here to be hijacked by people who may take it in a different direction, then it's important for those of us who are level headed to come out here and leverage our voice," one protester said.

"I have to show up, I have to do this work, because I'm white," another protester said. "I have to help dismantle the system white people created, it's not your fight, it's my fight to protect you."

A Spokane police officer was seen kneeling with protesters, earning a cheer from the crowd, according to KREM 2's Karthik Venkataraman.

The crowd on the courthouse steps has begun to move away from the courthouse, and head downtown, according to KREM 2's Taylor Viydo.

Protesters have begun lying on the ground in front of police.

KREM 2's Brandon Jones described the crowd as the courthouse as "passionate" as they chanted "enough," over and over.

Speakers are now talking to the crowd at the Spokane courthouse. Protesters can be heard chanting "say his name," "George Floyd," "hands up," "don't shoot," and "Black lives matter."

Protesters are close to the police line in the courtyard circle.

The crowd is estimated to be around 3,000 people between two separate events planned today.

Protesters have arrived at the Spokane courthouse where a rally is now being held.

Over the course of the route, protesters took over Broadway and the Monroe street bridge.

2:30
Demonstrators are now arriving at the Spokane courthouse chanting "I can't breathe" along the march route. There are an estimated three thousand participants marching today.

Others are marching across the Monroe Street bridge, according to KREM 2's Brandon Jones.

SWAT vehicles are parked nearby on Broadway and Adams, according to a KREM 2's Taylor Viydo.

Officers have begun to prepare for the arrival of protesters at the Spokane jail and courthouse, cordoning off sections with crime tape.

A protest over the death of George Floyd, a black man who was killed by a Minneapolis police officer on Memorial Day, is underway in Spokane.

Protesters have gathered at the Big Red Wagon in Riverfront park. According to the protest Facebook page, there will be a march and parade of cars down to the Spokane County jail/courthouse.

Protests were already gathered at the Big Red Wagon hours before it was scheduled to start. Protesters could be heard chanting "say his name," "George Floyd," "hands up," "don't shoot," and "I can't breathe."

"George Floyd was killed before our eyes — and we have every reason to be angry, to cry out for justice, to say never again," organizers wrote on Facebook.

Protests over Floyd's death have sprouted up across the nation, with some turning destructive. In Seattle, protests turned violent, crowds took over Interstate 5, and at least at least 55 people were arrested for assault, looting, destruction and arson downtown, according to the Seattle Police Chief.

RELATED: Pictures and videos: The George Floyd protest in Spokane