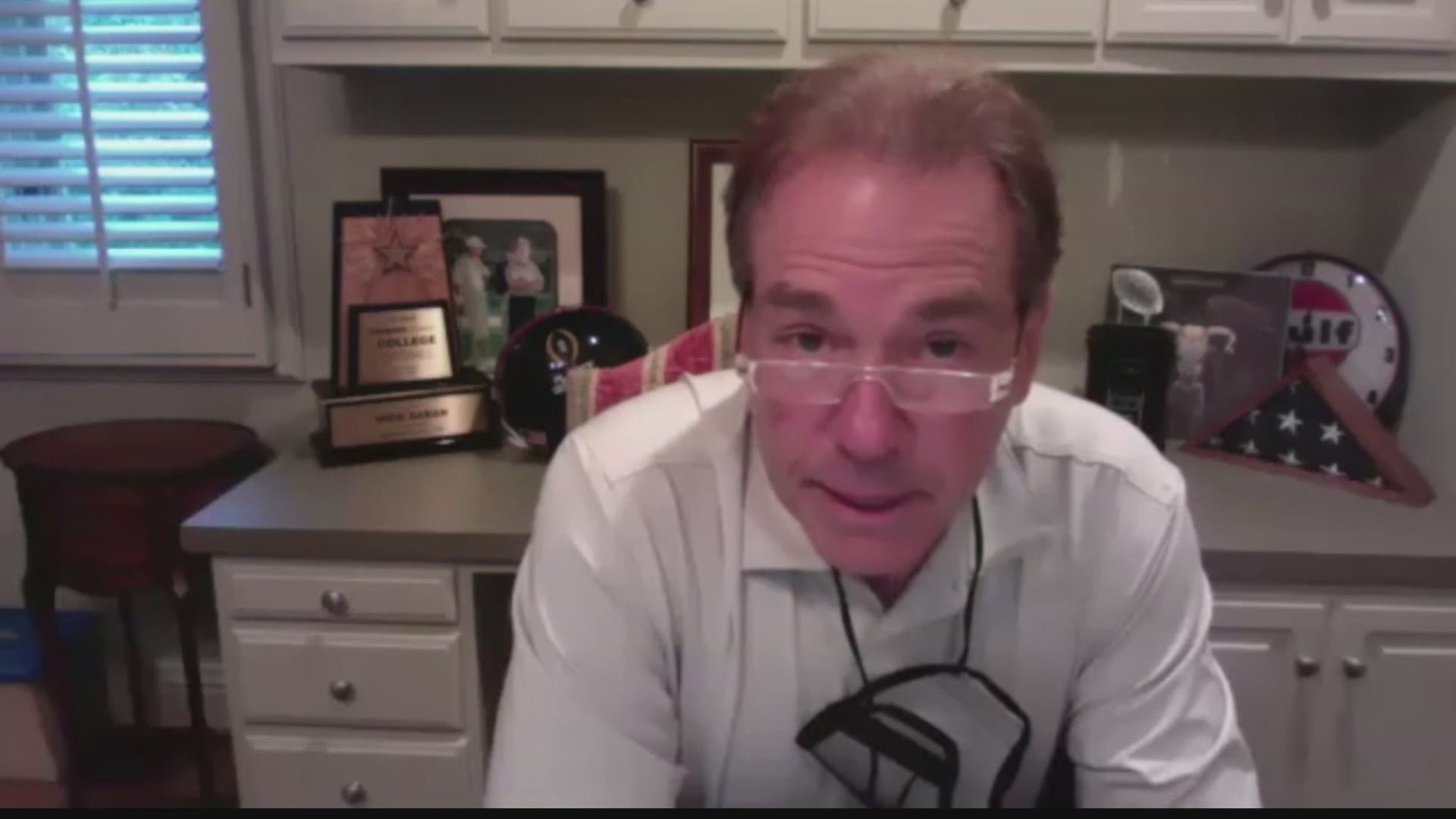 The Southeastern Conference had to postpone two games in the last three days because of positive COVID-19 tests, and now Alabama coach Nick Saban and his athletic director have tested positive for the virus ahead of the league’s biggest regular-season showdown.

Saban said in a statement Wednesday that he'll be working from home with offensive coordinator Steve Sarkisian overseeing the second-ranked Crimson Tide's preparations to play No. 3 Georgia on Saturday night.

“At this time, I do not have any symptoms relative to COVID, and I have taken another PCR test to confirm my diagnosis,” said Saban, whose AD Greg Byrne also tested positive.

No. 10 Florida's game against defending national champion LSU was postponed Wednesday to tentatively Dec. 12 after the SEC postponed Missouri-Vanderbilt on Monday. More positive tests could derail other games after the league waited until the end of September to kick off the season due to the coronavirus pandemic.

The Gators started testing daily Sunday and paused activities Tuesday after 19 positives with about a dozen more quarantined through contract tracing. Athletic director Scott Stricklin said they had 18 positives among scholarship players plus three walk-ons for a total of 21.

That left the Gators with less than 50 scholarship players available. Stricklin said it can sneak up on a team in a hurry and the key is hitting the brake.

“The SEC schedule was set up with something with an event like this in mind,” Stricklin said. "As much as we want to give our kids the opportunity to compete, we understand this isn’t a normal year and we’re going to have to have the ability to adapt to unusual circumstances such as this.”

Florida is hoping those numbers don't rise further, not that coach Dan Mullen wanted to speculat e on the tests.

“We’re certainly hoping and everybody that we’ve worked for getting these tests back before we conduct any team activity to make sure that we’re keeping everyone as safe as possible," Mullen said.

Vanderbilt coach Derek Mason is going through a similar situation.

He said his Commodores (0-3) are a “shell” after he had an estimated group of players in the “high 40s” available for practice Wednesday with a couple of coaches involved in this outbreak. Vanderbilt has an open date Oct. 24 and won't play again until hosting Mississippi on Oct. 31.

Mason also noted this issue isn't a Vanderbilt problem, noting how the NFL's Tennessee Titans were down for 16 days while testing players daily. Every coach will be watching to see how many players are available the rest of this season.

“For college football, it's a red flag or something that we really have to be aware of in terms of understanding that we don't control everything,” Mason said.

“Just like injuries, we’re not going to get into details on that,” Kiffin said. "We’re just trying to manage it the best we can.

Ole Miss, like Vanderbilt and now Florida, could quickly find the game schedule changing depending on the next batch of test results.

“I hope not,” Kiffin said of a potential postponement. "If we were to play today, we could play. So hopefully it stays that way.”

Tennessee coach Jeremy Pruitt said Monday that he had his entire team together for just the third straight week after testing and tracing had left players sidelined in isolation or quarantine. Georgia coach Kirby Smart said he knows his team is one exposure away from having an issue.

“We’ve been very fortunate so far, but we don’t have our test results back even from this week,” Smart said Tuesday.

Vanderbilt already was hit hard by having so many players opt out of this season because of the pandemic. The number has been reported as six Commodores opting out, including the kicker and four offensive linemen. Mason said Wednesday that total is closer to 10, which would be an SEC-high.

The numbers coaches will be monitoring most closely will be how many scholarship players are available. To play, the SEC requires at least 53 on game days. Vanderbilt had only 56 last weekend in a 41-7 loss to South Carolina.

Having an open date should help Vanderbilt suit up enough players to play Oct. 31. Mason said Vanderbilt has anyone who tests positive go into isolation for 10 days, followed by cardiac screening and then a cardiac MRI adding another three days to the process. Players also need at least three or four days of conditioning to play.

Timing is critical depending on the day of the week a positive test or tracing result returns.

“Every time you’re taking a test," Mason said, “you're crossing your fingers ... you don't have anybody in harm's way."