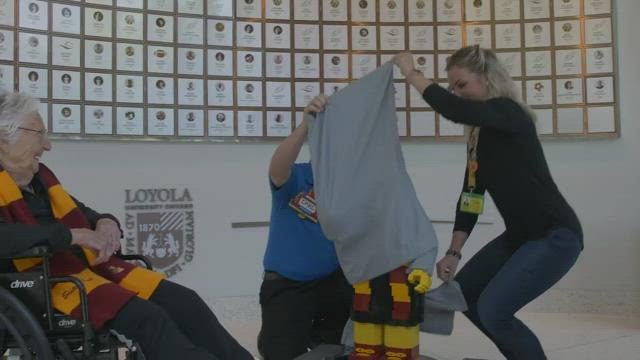 Sister Jean Dolores Schmidt, who became a worldwide sensation in 2018 during Loyola-Chicago's historic run to the NCAA Final Four, is celebrating her 100th birthday on Wednesday.

The celebrity nun and team chaplain has been very busy with all sorts of centennial birthday celebrations and was honored on Tuesday with a LEGO statue in her likeness.

The custom statue features 10,000 LEGO bricks and took more than 30 hours to build, according to a release from LEGOLAND Discovery Center. Sister Jean even got to meet her LEGO look-alike before it went on display in Chicago.

And what's Sister Jean's secret to 100 years of life? She told Chicago's WGN it all comes down to eating well, sleeping well and praying well.

The school is planning a big birthday celebration Wednesday afternoon on campus for Sister Jean, according to NBC Chicago.

In November, Loyola-Chicago presented Sister Jean with her very own Final Four Ring. At the time she joked that she felt as if it added five pounds to her weight.