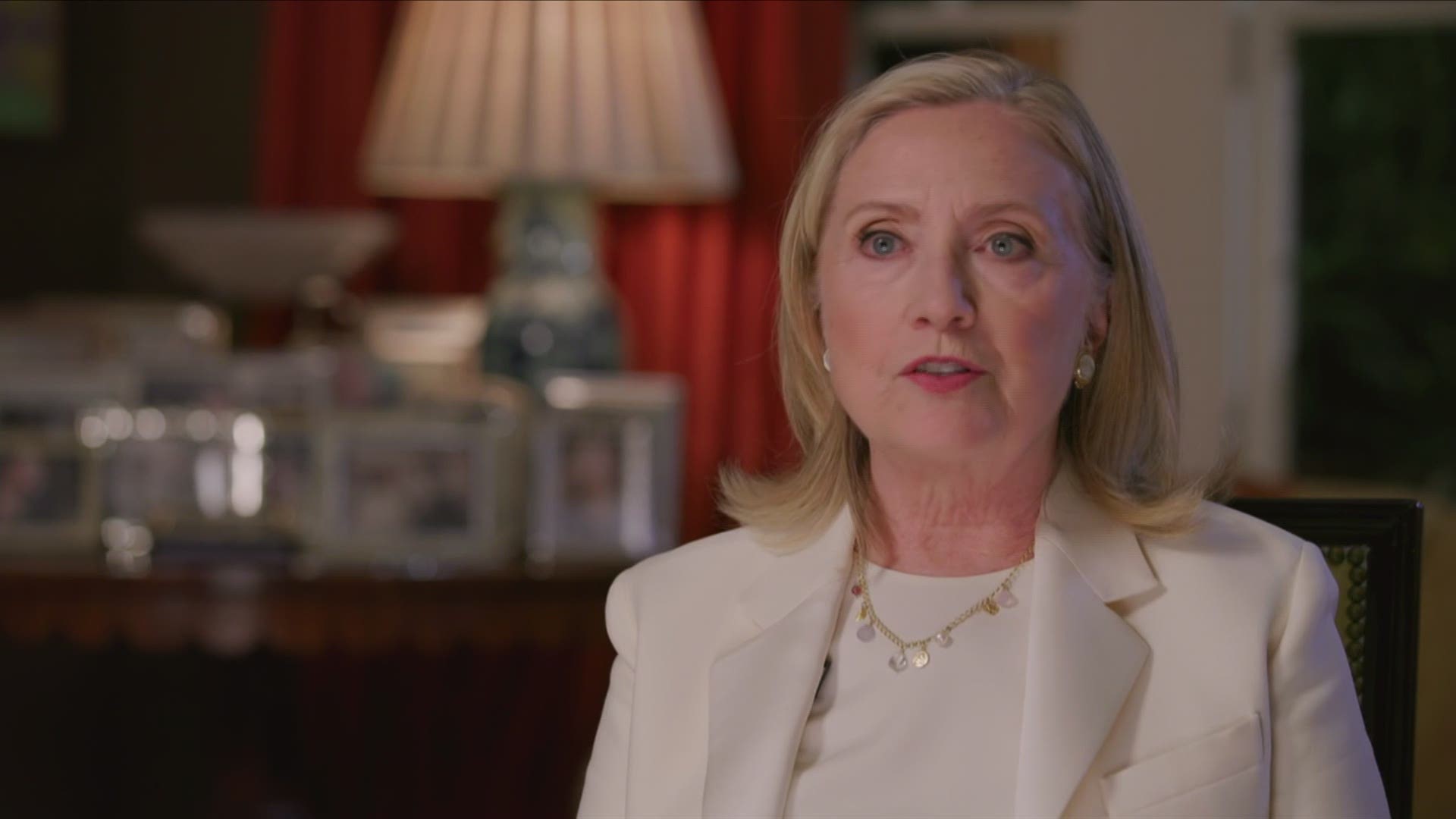 After more than four decades in public life, Hillary Clinton returned to the Democratic National Convention to cement her legacy as a champion of women in politics — and to urge people to vote, even if they're convinced Joe Biden will win.

Clinton, who lost the presidency to Donald Trump in 2016 despite winning the popular vote by nearly 3 million votes, is a complicated figure in American political culture. She's despised by many Republicans and viewed warily by some progressives who are increasingly assertive in shaping the modern Democratic Party.

In her speech, Clinton reflected on her loss and urged Americans not to take the election’s outcome for granted after some voters stayed home in 2016.

“For four years, people have said to me, ‘I didn’t realize how dangerous he was.’ ‘I wish I could go back and do it over.’ Or worse, ‘I should have voted.’ Well, this can’t be another woulda coulda shoulda election,” she said.

Four years after she made history as the first woman nominated for president by a major party, Clinton will nod to another enduring legacy: the millions of women inspired by her 2016 bid who marched, ran for office and have become a powerful force in taking on Trump. Her presence Wednesday night comes as California Sen. Kamala Harris becomes the first Black woman to accept a spot on a major presidential ticket and one day after the 100th anniversary of women's suffrage.

“It took seven decades of suffragists marching, picketing and going to jail to push us closer to a more perfect union," Clinton said.“Fifty-five years ago, John Lewis marched and bled in Selma because that work was unfinished."

That's expected to send a message about staying in the fight to women across the country for whom 2016 was a turning point, said Cecile Richards, co-founder of Supermajority, which formed in 2019 to work toward gender equality.

“The fact that she hasn’t given up, I think, has encouraged a lot of women to not give up,” said Richards, the former president of Planned Parenthood. “I think there’s an important role she has to play in saying, ‘OK, she’s getting up every morning and doing this work and we can, too.' I think it’s an important message that you've just got to dust yourself off and keep going.”

After Trump’s election, millions turned out for women’s marches and women ran for — and won — office in record numbers, helping Democrats take control of the U.S. House in 2018. A record number of women, including Harris, sought this year’s Democratic presidential nomination. And the number of women running for the House and the U.S. Senate set a record again this year, as did the number of women of color running, according to the Center for American Women and Politics at Rutgers University.

“Since 2016 we've seen these waves of women stepping up" at all levels of government, said Adrianne Shropshire, president of BlackPAC, a national organization that works to mobilize Black voters. “You have this ‘Before Hillary’ and ‘After Hillary,’ when things are very, very different."

Shropshire called Clinton a “trailblazer” who made a way for other women while enduring attacks dating from her time as first lady in the 1990s to her 2016 loss after a campaign in which Trump often led rally crowds in chants of “lock her up.” She said the Democratic Party also has shifted since 2016 to lean more into the base of Black voters and progressives, and to look more like the country.

Wednesday's speech was Clinton’s sixth to the Democratic National Convention. In 1992 her husband, longtime Arkansas Gov. Bill Clinton, was the nominee, but Clinton didn't speak at that year's convention. Her first DNC speech was in 1996, when the then-first lady faced criticism about the Whitewater scandal and for having too much influence on administration policy.

In 2000, Clinton spoke as a candidate for the Senate, and in 2004 the then-senator from New York introduced her husband. She was on stage in 2008 after her first presidential bid, backing Barack Obama, the man to whom she lost the nomination and in whose administration she later served as secretary of state. In 2016 she was the nominee and told delegates, "We just put the biggest crack in that glass ceiling yet.”

Karen Finney, a former Clinton press secretary and senior adviser to her 2016 campaign, said Clinton represents the arc of history for women and women in politics, from a first lady who wasn't supposed to publicly exert influence to a presidential nominee. Clinton has noted that while women won the right to vote in 1920, that right wasn’t extended to Black women and other women of color until decades later, Finney said.

“To then have a Black woman on the ticket as vice president, it demonstrates how far we've come. But we're also at a moment in history where we really aren't where we should be,” she said.

Finney expected Clinton to speak Wednesday about the significance of the moment for women and the conversations happening around racial injustice. She's also hoping to hear Clinton's unique perspective on what already is a bruising 2020 race.

“She certainly has some of the best insight about what it's like to run against Donald Trump,” Finney said.

After the last election, I said, “We owe Donald Trump an open mind and the chance to lead.” I really meant it. Every president deserves that. And Trump walked into the Oval Office with so much set up for him: A strong economy. Plans for managing crises—like a pandemic.

Yes, we Democrats would have disagreed with him on many, many things. But if he had put his own interests and ego aside—if he could have seen the humanity in a child ripped from her parents at the border or a protester calling for justice or a family whose home was destroyed by a wildfire who happened to live in a blue state—if he had even tried to govern well and lead us all—he might have proved us wrong. And that would have been a good thing, for America and the world.

America needs a president who shows the same compassion, determination, and leadership in the White House that we see in our communities. Throughout this crisis, Americans have kept going—checking on neighbors, showing up to jobs at grocery stores and nursing homes. Because it still takes a village.

We need leaders equal to this moment. We need Joe Biden and Kamala Harris.

Everyone has a story about Joe’s thoughtfulness and empathy. I remember him calling after my mother, Dorothy, died. We talked about being raised by strong, no-nonsense women. When I walked with him through the house where he grew up in Scranton, he remembered every detail—about the house, the neighborhood, the people who lived there, and the values they shared. There is no better testament to Joe’s character than his family—including his wife, Dr. Jill Biden, who has said she will keep her teaching job as First Lady. That’s outstanding.

And boy, did Joe, pick the right partner in Kamala Harris—another daughter of an extraordinary mother. Kamala is relentless in the pursuit of justice, and uncommonly kind. When her press secretary Tyrone Gayle, a remarkable young man who had also worked on my campaign, was dying of cancer, she dropped everything to be with him in his final moments. Because that’s who she is.

I know a thing or two about the slings and arrows coming her way. Kamala can handle them all.

This is the team to pull our nation back from the brink and build back better. But they can’t do it without all of us.

For four years, people have said to me, “I didn’t realize how dangerous he was.” “I wish I could go back and do it over.” “I should have voted.” This can’t be another woulda-coulda-shoulda election. If you’re voting by mail, request your ballot now, and send it back as soon as you can. If you vote in person, do it early. Bring a friend and wear a mask. Become a poll worker.

Most of all, no matter what, vote. And convince everyone you know to vote.

Remember in 2016 when Trump asked: “What do you have to lose?” Well, now we know: our health, our jobs, even our lives. Our leadership in the world and, yes, our post office. As Michelle Obama and Bernie Sanders warned us on Monday: If Trump is re-elected, it will get even worse. My friends, we need unity now more than ever.

But let’s set our sights higher than getting one man out of the White House. Let’s vote for the jobs Joe will create, and for emergency relief that lifts small businesses and hardworking people. Because it’s wrong that the wealthiest Americans got $400 billion richer during the pandemic while 40 million people lost their jobs.

Vote for parents struggling to balance their child’s education and their safety. And for health care workers fighting COVID-19 with no help from the White House. Vote for paid family leave and health care for everyone. Vote to protect Social Security, Medicare, reproductive rights, and our planet.

Vote for DREAMers and their families. For law enforcement that serves and respects communities of color. Vote for justice for George Floyd, Breonna Taylor, and Ahmaud Arbery, because Black Lives Matter.

Vote to make sure we—not a foreign adversary—choose our president.

Vote for the America we saw in the roll call last night: diverse, compassionate, full of energy and hope. Vote like our lives and livelihoods are on the line, because they are.

Remember: Joe and Kamala can win 3 million more votes and still lose. Take. It. From. Me. We need numbers so overwhelming Trump can’t sneak or steal his way to victory. So text VOTE to 30330 and let’s go win.

One hundred years ago yesterday, the 19th Amendment was ratified. It took seven decades of suffragists marching, picketing, and going to jail to push us closer to that more perfect union. Fifty-five years ago, John Lewis marched and bled in Selma because that work was unfinished.

Tonight I am thinking of the girls and boys who see themselves in America’s future because of Kamala Harris—a Black woman, the daughter of Jamaican and Indian immigrants, and our nominee for Vice President of the United States. This is our country’s story: breaking down barriers and expanding the circle of possibility.

So to all the young people: Don’t give up on America. Despite our flaws and problems, we have come so far. And we can still be a more just and equal country, full of opportunities previous generations could never have imagined.

There’s a lot of heartbreak in America right now—and the truth is, many things were broken before the pandemic. But, as the saying goes, the world breaks everyone at one point or another, and afterward, many are stronger in the broken places. Joe Biden knows how to heal, because he’s done it himself.