The Special Counsel's office is disputing aspects of a BuzzFeed story that claims President Donald Trump ordered his former lawyer Michael Cohen to lie to Congress. 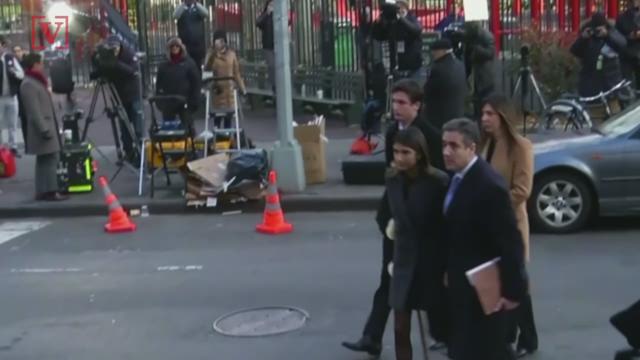 WASHINGTON — BuzzFeed says it stands by its reporting but is "working to determine what exactly" special counsel Robert Mueller's office is disputing about its story on President Donald Trump and his former lawyer Michael Cohen.

Mueller spokesman Peter Carr issued an extraordinary and unprecedented statement on Friday night characterizing as "not accurate" a BuzzFeed News story that said Trump had directed Cohen to lie to Congress about a Trump real estate project in Moscow.

"BuzzFeed's description of specific statements to the Special Counsel's Office, and characterization of documents and testimony obtained by this office, regarding Michael Cohen's Congressional testimony are not accurate," Carr wrote.

The story was attributed to two unidentified law enforcement officials.

In a statement Friday night, BuzzFeed spokesman Matt Mittenthal says the news organization is trying to figure out what Mueller's team is taking issue with.

In a separate statement, BuzzFeed editor-in-chief Ben Smith says it stands by the reporting and the "sources who informed it." He called on Mueller "to make clear what he's disputing."

When the statement from Mueller's office came out later Friday, Trump began retweeting others who were calling the story "fake news."

When Cohen was interviewed by Mueller's team, he acknowledged receiving instructions from Trump to lie that negotiations over the tower ended months earlier than they did, according to BuzzFeed.

The report also indicated Trump was in favor of a plan to personally visit Russia to meet with President Vladimir Putin during the presidential campaign in order to move negotiations forward.

As of late Friday evening, no other major news outlets had independently verified the report.

Earlier in the day, Trump tweeted his response to the report, saying Cohen was "lying to reduce his jail time!"

An adviser to Cohen, Lanny Davis, declined to comment on the substance of the article, saying that he and Cohen wouldn't answer questions out of respect for Mueller.

Trump attorney Rudy Giuliani reportedly responded, according to a tweet from a Washington Post reporter, saying “If you believe Cohen I can get you a great deal on the Brooklyn Bridge."

As the report stated, however, Mueller's team had learned of Trump's directive through other means before asking Cohen himself.

Cohen pleaded guilty in November of lying to Congress about the details of the Trump project in Moscow. Cohen told two congressional committees that the talks about the tower project ended in January 2016, a lie he said was an act of loyalty to Trump. In fact, the negotiations continued until June 2016, Cohen acknowledged.

Trump on the campaign trail dismissed claims that he had connections to the Kremlin. After Cohen's guilty plea, Trump told reporters there would have been nothing wrong if he did pursue to Moscow deal, but that he didn't because he was focused on the campaign.

"The allegation that the President of the United States may have suborned perjury before our committee in an effort to curtail the investigation and cover up his business dealings with Russia is among the most serious to date,” Schiff tweeted.

“Based on the Buzzfeed report and numerous other articles showing @realDonaldTrump committed Obstruction of Justice and other possible felonies, it is time for the House Judiciary Committee to start holding hearings to establish a record of whether @POTUS committed high crimes," Lieu tweeted.

Sen. Chris Murphy, D-Conn., called on Mueller to show members of Congress what he has on this particular aspect now -- before his final report is handed in.

"Listen, if Mueller does have multiple sources confirming Trump directed Cohen to lie to Congress, then we need to know this ASAP. Mueller shouldn’t end his inquiry, but it’s about time for him to show Congress his cards before it’s too late for us to act," Murphy tweeted.

Rep. Joaquin Castro, D-Texas, went a step further, saying that if the story is true, then Trump should leave office.

“If the @Buzzfeed story is true, President Trump must resign or be impeached," Castro tweeted.

During his confirmation hearing on Tuesday, U.S. Attorney General nominee William Barr acknowledged that instructing someone to commit perjury would be obstruction of justice.

"If there was some reason to believe that the President tried to coach somebody not to testify or testify falsely, that could be obstruction of justice," Sen. Lindsey Graham, R-SC, asked Barr.

"Yes. Under that... under an obstruction statute. Yes," Barr responded.

Cohen is set to begin a three-year prison sentence in March for multiple crimes including the arrangement of paying hush money to conceal Trump's alleged sexual affairs.

He's also made plans to testify in open session to the House Oversight Committee on February 7.