Biden signed the 'American Rescue Plan' into law just hours before he addresses the nation on the one-year anniversary of the COVID-19 pandemic. 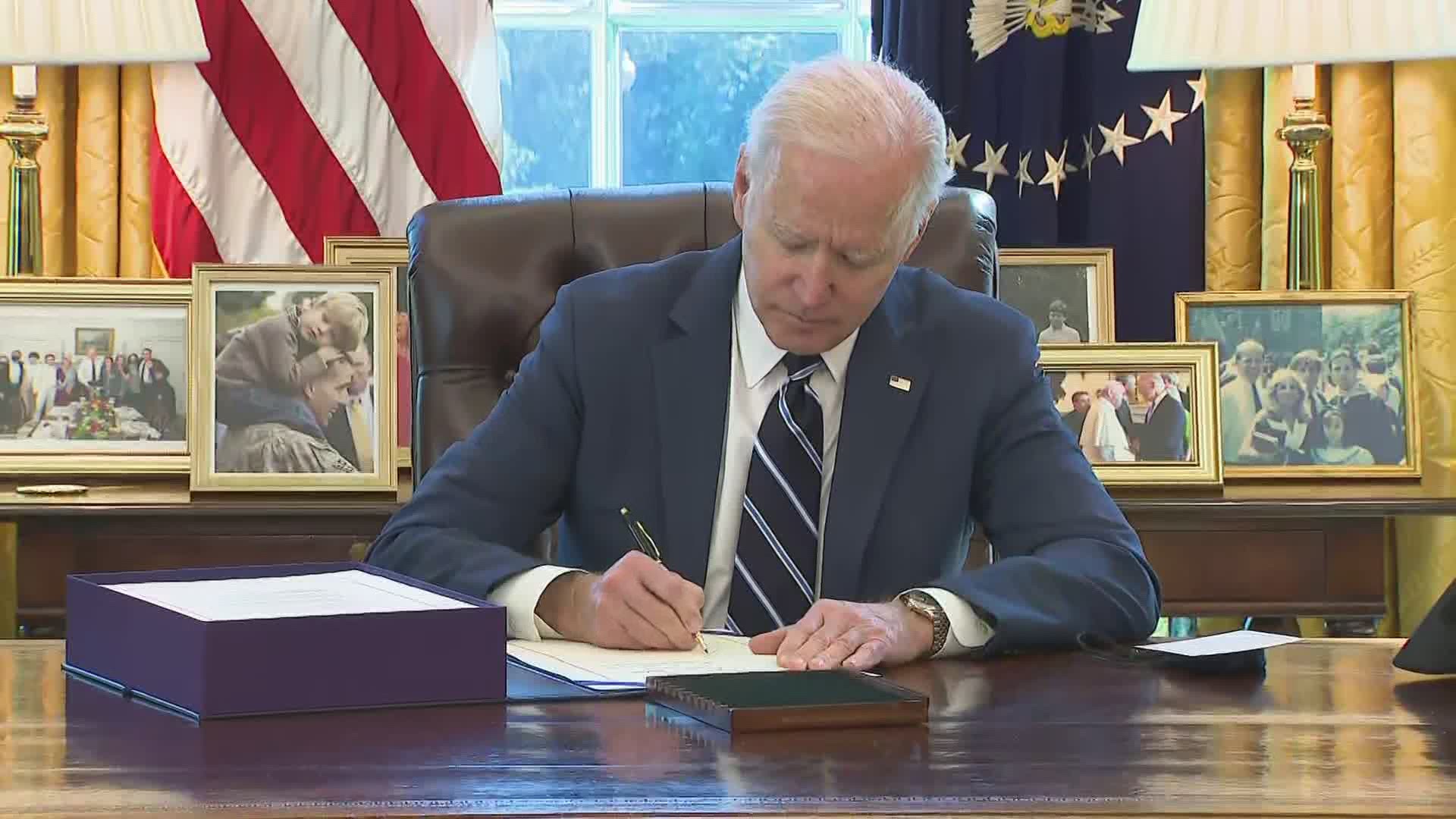 WASHINGTON — Marking a year of loss and disruption, President Joe Biden on Thursday signed into law the $1.9 trillion relief package that he said will help the U.S. defeat the coronavirus and nurse the economy back to health.

The signing came hours before Biden delivers his first prime-time address since taking office. He's aiming to steer the nation toward a hungered-for sentiment — hope — as he marks one year since the onset of the pandemic that has killed more than 529,000 Americans.

“This historic legislation is about rebuilding the backbone of this country," Biden said as he signed the bill in the Oval Office.

Biden originally planned to sign the bill on Friday, but it arrived at the White House more quickly than anticipated.

"We want to move as fast as possible,” tweeted White House chief of staff Ron Klain. He added, “We will hold our celebration of the signing on Friday, as planned, with congressional leaders!”

Previewing his remarks, Biden said he would “talk about what we’ve been through as a nation this past year, but more importantly, I’m going to talk about what comes next.”

Biden’s challenge Thursday night will be to honor the sacrifices made by Americans over the last year while encouraging them to remain vigilant despite “virus fatigue” and growing impatience to resume normal activities given the tantalizing promise of vaccines. Speaking on the one-year anniversary of the World Health Organization’s declaration of a pandemic, he’ll mourn the dead, but also project optimism about the future.

RELATED: How much will your stimulus payment be? This calculator can help

RELATED: Third stimulus check: Here is what else is in the bill besides $1,400 payments

“This is a chance for him to really beam into everybody’s living rooms and to be both the mourner in chief and to explain how he’s leading the country out of this,” said presidential historian and Rice University professor Douglas Brinkley.

“This is a big moment,” Brinkley added. “He’s got to win over hearts and minds for people to stay masked and get vaccinated, but also recognize that after the last year, the federal government hasn’t forgotten you.”

Biden’s evening remarks in the East Room are central to a pivotal week for the president as he addresses the defining challenge of his term: shepherding the nation through the twin public health and economic storms brought about by the virus.

RELATED: When will the monthly child tax credit payments in the COVID-19 relief bill start?

On Monday, the Centers for Disease Control and Prevention released initial guidance for how vaccinated people can resume some normal activities. On Wednesday, Congress approved the president’s $1.9 trillion “American Rescue Plan,” aimed at easing the economic impact of the virus on tens of millions of people. And the nation was on pace to administer its 100 millionth dose of vaccine as soon as Thursday.

Biden said he would focus his remarks on what his administration plans to deliver in the coming months, but also reiterate his call for Americans to continue to practice social distancing and wear face coverings to hasten the end of the pandemic.

“I’m going to launch the next phase of the COVID response and explain what we will do as a government and what we will ask of the American people,” he said.

He added: “There is light at the end of this dark tunnel of the past year. There is real reason for hope.”

Almost exactly one year ago, President Donald Trump addressed the nation to mark the WHO’s declaration of a global pandemic. He announced travel restrictions and called for Americans to practice good hygiene but displayed little alarm about the forthcoming catastrophe. Trump, it was later revealed, acknowledged that he had been deliberately “playing down” the threat of the virus.

For Biden, who has promised to level with the American public after the alternate reality of Trump’s virus talk, the imperative is to strike the correct balance “between optimism and grief,” said Princeton history professor and presidential scholar Julian Zelizer.

“Generally, the country likes optimism, and at this particular moment they’re desperate for optimism, but you can’t risk a ‘Mission Accomplished’ moment,’” he said, warning against any premature declaration that the threat has been vanquished.

Fifty days into his presidency, Biden is experiencing a polling honeymoon that his predecessor never enjoyed. Yet public sentiment remains stubbornly polarized and fewer people among his critics seem willing to say they’ll give him a chance than was the case for earlier presidents. Overall, he has earned strong marks on his handling of the pandemic.

According to a poll from The Associated Press-NORC Center for Public Affairs Research released last week, 70% of Americans back the Democratic president’s handling of the virus response, including 44% of Republicans.

The White House hopes that as Biden assumes the role of cheerleader for the virus relief package, the elements of the $1.9 trillion bill that are popular with Republicans will boost his support even further.

Brinkley said Biden’s decision to deliver a speech aimed directly at the nation before he makes the traditional presidential address to a joint session of Congress signals that it is as much an “introduction” of the president and his administration to the American people as a status report on his first 50 days in office.

Presidential addresses to Congress “tend to be a series of soundbites,” Brinkley said. “This way, he can make his case directly.”

Still, the prime-time speech is in many ways an anachronism, better suited for an era when Americans had vastly fewer television options and in which a presidential address could reframe the national conversation.

The fragmented media landscape makes it more difficult for Biden to reach people, Zelizer said, but that may be beside the point.

“Everything he’s doing is throwback,” said Zelizer. “It’s part of his effort to create normalcy after the last four years.”

RELATED: A year on, WHO still struggling to manage pandemic response

When will the third stimulus check be sent?

During the first round of stimulus checks in April 2020, it took about two weeks for the federal government to start distributing the money. It took around one week for the second round of checks, worth $600, in early January partly because the infrastructure from the first stimulus was in place. 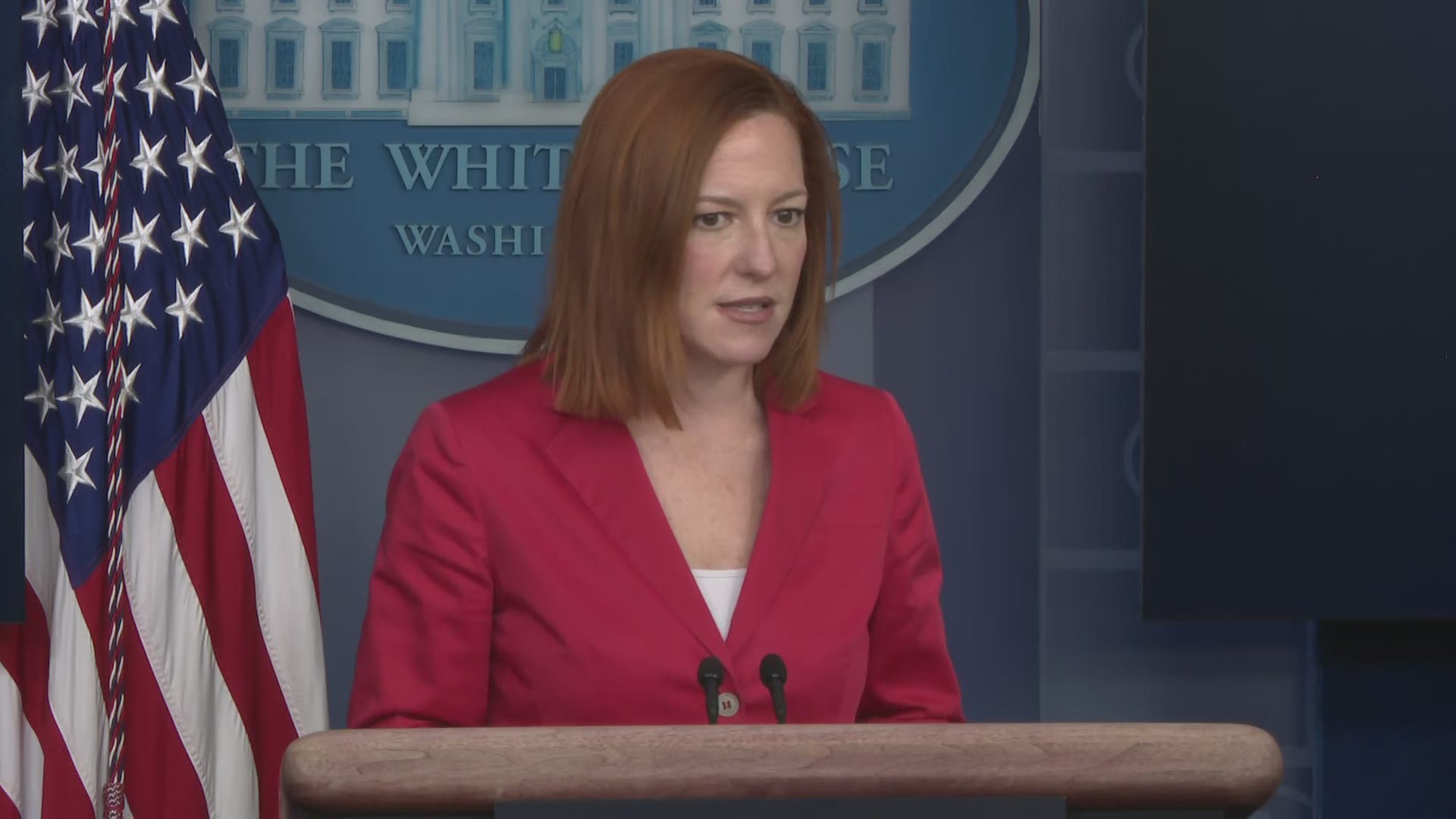