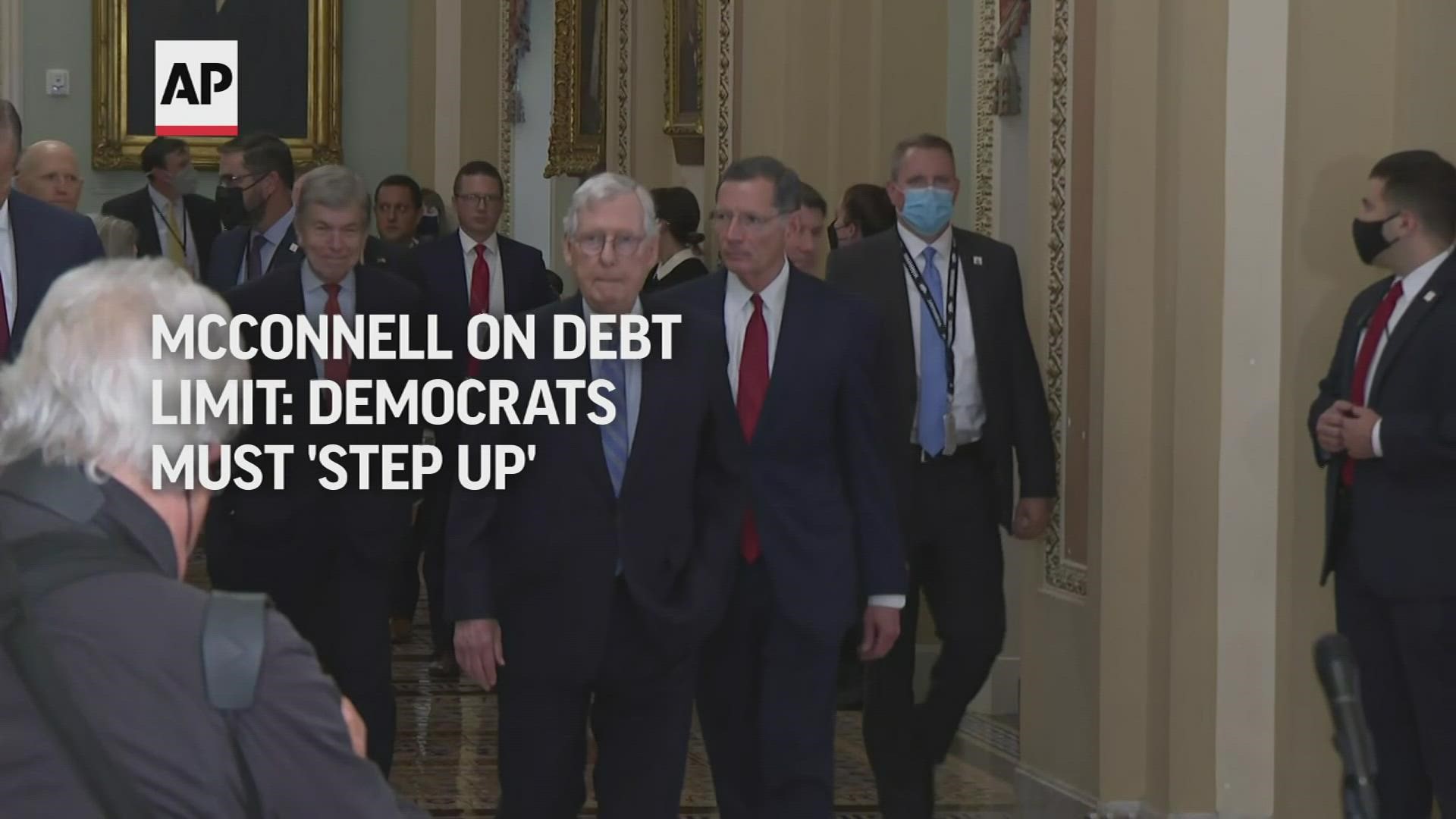 WASHINGTON — Senate Republican leader Mitch McConnell on Wednesday told Democrats he would allow an emergency debt limit extension into December, edging back from a perilous standoff by offering a potential path to avoid a federal default.

A procedural vote on legislation that would suspend the debt limit for two years was abruptly delayed, and the Senate recessed so lawmakers could discuss next steps.

“This will moot Democrats’ excuses about the time crunch they created and give the unified Democratic government more than enough time to pass standalone debt limit legislation through reconciliation,” McConnell said.

It also will allow Republicans to avoid the blame they would have gotten from some quarters for blocking a vote on the longer extension.

Earlier Wednesday, President Joe Biden enlisted top business leaders to push for immediately suspending the debt limit, saying the approaching Oct. 18 deadlines created the risk of a historic default that would be like a "meteor" that could crush the economy and financial markets.

At a White House event, the president shamed Republican senators for threatening to filibuster any suspension of the $28.4 trillion cap on the government's borrowing authority. He leaned into the credibility of corporate America — a group that has traditionally been aligned with the GOP on tax and regulatory issues — to drive home his point as the heads of Citi, JP Morgan Chase and Nasdaq gathered in person and virtually to say the debt limit must be lifted.

“It’s not right and it’s dangerous," Biden said of the resistance by Senate Republicans. “So let's end this mess and vote today.”

His moves came amid talk that Democrats might try to change Senate filibuster rules to get around Republicans. But Sen. Joe Manchin, D-W.V., reiterated his opposition to such a change Wednesday, likely taking it off the table for Democrats.

Business leaders echoed Biden's points about needing to end the stalemate as soon as possible, though they sidestepped the partisan tensions in doing so. Each portrayed the debt limit as an avoidable crisis.

“We just can’t wait to the last minute to resolve this,” said Jane Fraser, CEO of the bank Citi. “We are, simply put, playing with fire right now, and our country has suffered so greatly over the last few years. The human and the economic cost of the pandemic has been wrenching, and we don’t need a catastrophe of our own making.”

The financial markets have been yet to fully register the drama in Washington, though there are signs that they are getting jittery, said Adena Friedman, CEO of the Nasdaq stock exchange.

Stock prices rose after news of McConnell's offer came out.

Ahead of the White House meeting, the administration warned that if the borrowing limit isn't extended, it could set off an international financial crisis the United States might not be able to manage.

“A default would send shock waves through global financial markets and would likely cause credit markets worldwide to freeze up and stock markets to plunge,” the White House Council of Economic Advisers said in a new report. “Employers around the world would likely have to begin laying off workers.”

The recession that could be triggered could be worse than the 2008 financial crisis because it would come as many nations are still struggling with the COVID-19 pandemic, the report said. It was first obtained by The New York Times.

Congress has just days to act before the Oct. 18 deadline when the Treasury Department has warned it would quickly run short of funds to handle the nation’s already accrued debt load.

The Senate, meanwhile, had been scheduled to vote Wednesday on whether to take up a bill to suspend the debt limit. Republicans were again expected to block it. To get around the GOP standoff, Biden indicated in off-the-cuff comments Tuesday Democrats were weighing a change to Senate rules.

But Manchin, who has for months resisted pressure from liberal activists to change the filibuster so that Democrats can advance legislation on other issues such as voting rights, appeared unmoved.

“I think I’ve been very clear," Manchin told reporters. "Nothing changes.” He implored Senate Majority Leader Chuck Schumer and GOP leader Mitch McConnell to work together to resolve the impasse.

Getting rid of the filibuster rule would lower the typical 60-vote threshold for passage to 50. In the split 50-50 Senate, Vice President Kamala Harris can break a tie, allowing Democrats to push past Republicans. But to succeed in changing the rules, all Democratic senators would need to be on board.

At his weekly press conference, Schumer did not embrace — or reject — the idea of changing the filibuster for this one specific issue.

Instead, Schumer simply repeated what he, Biden and others have said — that Republicans should “ get out of the way” and allow Democrats to pass the debt measure that's already been approved and sent over from the House. He said the burden is on McConnell's shoulders.

McConnell, though, wants to force Democrats to use the process he favors, which gives Republicans ample time to remind voters about the unpopular vote. He sought to frame the Democrats as flailing, while insisting they play by his rules.

Once a routine matter, raising the debt limit has become politically treacherous over the past decade or more, used by Republicans, in particular, to rail against government spending and the rising debt load.

Both parties have contributed to the debt, and the nation has run a deficit most years for decades.

The filibuster has been up for debate all year, as Biden and his allies consider ways to work around GOP opposition to much of his agenda.

Biden has not backed earlier calls to end the filibuster for other topics — namely voting law changes. But Tuesday's comments could signal a new phase.