Obama warns democracy is on the line in Democratic convention speech

Former President Barack Obama praised his friendship and partnership with Joe Biden during their eight years in the White House. 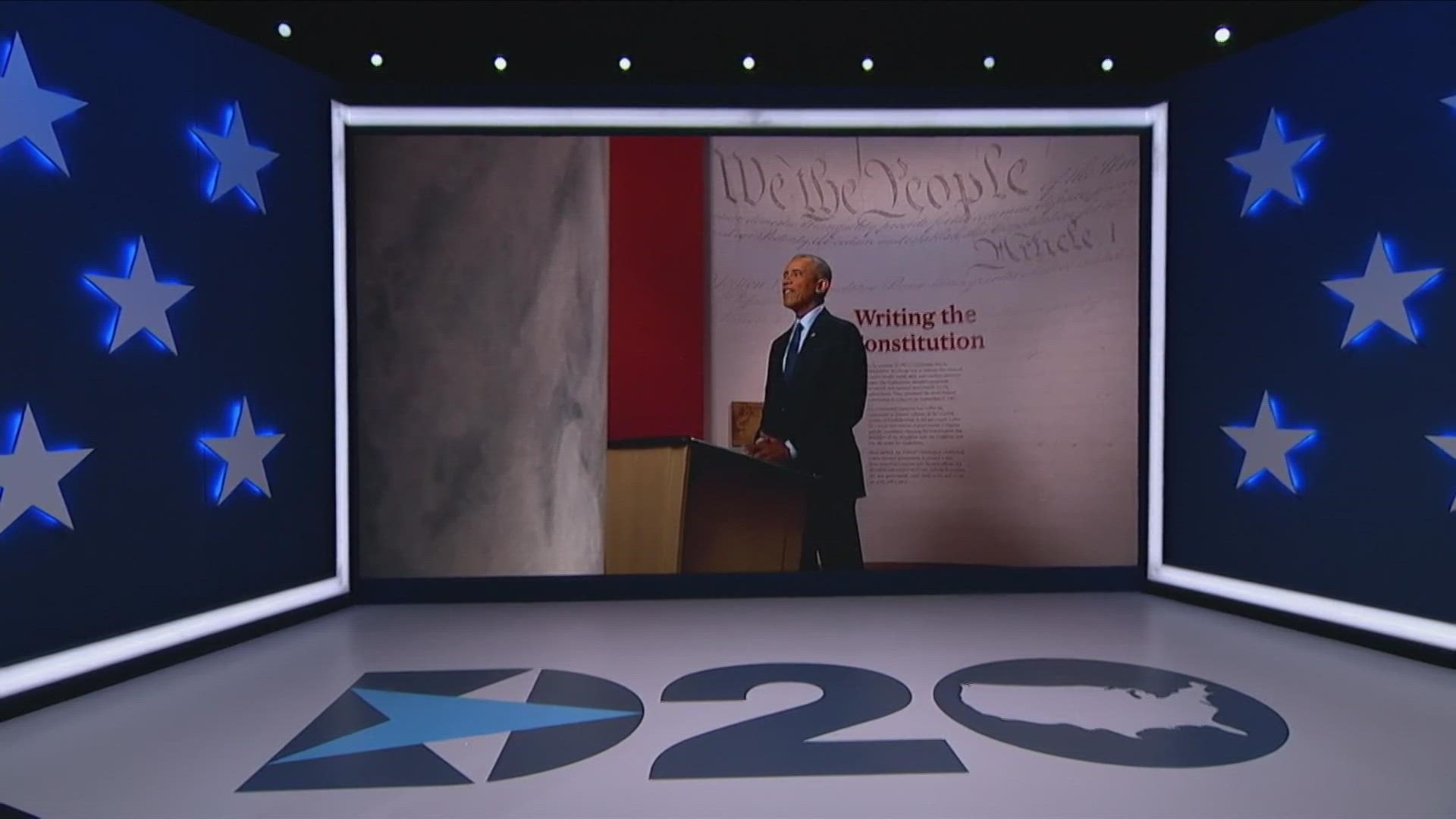 WASHINGTON — Barack Obama issued a blistering rebuke of President Donald Trump in Wednesday's Democratic Party convention, accusing his successor of unleashing America’s “worst impulses” and treating the presidency as a reality show “to get the attention he craves."

The former president also put the stakes in the November election in stark terms, warning that the future of American democracy is on the line in the race between Trump and Democratic nominee Joe Biden.

“I am also asking you to believe in your own ability — to embrace your own responsibility as citizens — to make sure that the basic tenets of our democracy endure,” Obama said. He spoke live Wednesday night from Philadelphia's Museum of the American Revolution, ahead of Kamala Harris, Biden's running mate — the nation’s first Black president handing off to the first Black woman on a major party presidential ticket.

Even in the heat of campaigns, former presidents are typically more restrained than other politicians in their criticisms of a sitting president. Yet Obama's remarks — his most personal and direct critique of Trump yet — reveal the 44th president's striking disregard for the nation's current commander in chief. He said that while he hoped Trump might come to take the presidency seriously, he now believes he is simply incapable of doing so.

Obama's headlining role at the convention is aimed in part at galvanizing younger, more liberal voters who may not have a natural affinity for the 77-year-old Biden, a career politician with a more moderate record. Democrats see Obama as a bridge to those voters, someone who can speak both to Biden's character and to the urgency of progressives pushing for more sweeping change to the nation's economic and domestic policies.

“He is an incomparable witness for Biden,” David Axelrod, a longtime Obama political adviser. “But he also speaks compellingly to young people restless not just to purge Trump, but to achieve real, meaningful change.”

RELATED: Gabrielle Giffords speaks at DNC about her 2011 shooting

Obama forged a close personal relationship with Biden during their eight years together in the White House and has been a sounding board for him throughout the 2020 campaign. Obama said that when he set out to pick a vice president, “I didn’t know I’d end up finding a brother.”

Yet there’s an inherent tension in Obama’s role as one of the most powerful and important surrogates for Biden. Obama’s own political rise was fueled by the power of barrier-breaking, generational change, and he’s encouraged “new blood” in politics. More recently, Obama drew attention during the 2020 Democratic primary when he said many of the world’s problems have been due to “old people, usually old men, not getting out of the way.”

With the general election now in full swing, Obama confidants say that while the former president’s support for Biden is unequivocal, he does worry about enthusiasm among younger voters, particularly younger voters of color. He’s well aware that one of the reasons Trump currently occupies the Oval Office is that those voters did not show up in the same large numbers in 2016 for Hillary Clinton as they did when he was on the ballot.

Obama’s wife, former first lady Michelle Obama, spoke directly to those concerns in her own well-received address on Monday’s opening night of the convention, urging Democrats to “vote like we did in 2008 and 2012.” The president made a similarly urgent appeal, and took aim at what an aide described as “the cynical moves by the current administration and the Republican Party to discourage Americans from voting.”

Trump appeared enraged during the speech, sending out a tweet in all caps.

"WHY DID HE REFUSE TO ENDORSE SLOW JOE UNTIL IT WAS ALL OVER, AND EVEN THEN WAS VERY LATE? WHY DID HE TRY TO GET HIM NOT TO RUN?" Trump claimed, providing no evidence.

WHY DID HE REFUSE TO ENDORSE SLOW JOE UNTIL IT WAS ALL OVER, AND EVEN THEN WAS VERY LATE? WHY DID HE TRY TO GET HIM NOT TO RUN?

Trump also repeated a claim that Obama spied on his campaign.

Speaking at a news conference earlier Wednesday, Trump shrugged off Obama's criticism, saying that if the former administration had done a good job, “I wouldn't be here.”

Trump added, “And probably if they did a good job, I wouldn't have even run.”

The fact that the Obamas are headliners on two of the four nights of the Democratic convention speaks to the crucial role they have in helping Biden try to reassemble the coalition that propelled them into the White House — and the challenge the Democratic Party has in building a new bench of other leaders who can do the same.

“When you think about folks who have the capacity to really unify us, there are only a few people,” said Yvette Simpson, chief executive of Democracy for America, a progressive political action committee. “Certainly Barack Obama and Michelle Obama are among them.”

Indeed, the former president has enviable popularity, both among Democrats and all Americans. A Fox News poll conducted in May found 93% of Democrats had a favorable opinion of Obama, as did 63% of all registered voters.

Despite that strong support, there has been some rethinking of Obama’s legacy among some of his party’s most liberal activists, who argue he didn’t go far enough in overhauling the nation’s health care system and gave too much away to Republicans in fiscal negotiations. Obama himself has acknowledged there was more he wanted to do, but argued he was hamstrung by the realities of a Republican-controlled House, and eventually Senate, for much of his tenure.

But some of Obama’s more recent comments have energized liberals, who see signs of him embracing some of the tactics of his party’s activist wing. Progressives cheered in particular when Obama called for eliminating the Senate filibuster rules requiring 60 votes on major pieces of legislation, calling it a “Jim Crow relic” that is holding up rewriting voting rights laws. His surprise comments came during his eulogy at the funeral of the late civil rights leader and Georgia Rep. John Lewis.

“That’s the guy we remember from the election of 2008,” Simpson said of Obama’s remarks at Lewis’ funeral. “It encouraged me that he might be the guy that pulls Joe Biden along a little bit.”