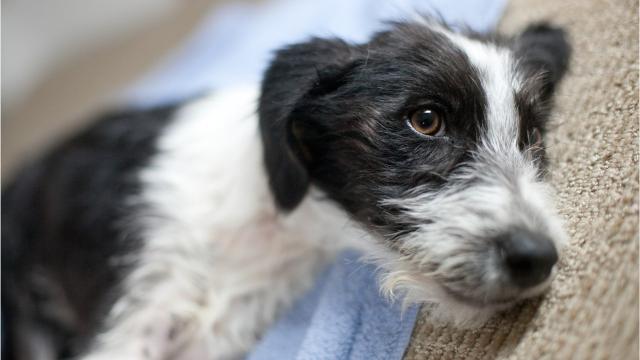 Lenka Perron let her two greyhounds out to use the bathroom Saturday night in her fenced yard at her Michigan home in what should have been an uneventful routine.

Credit: Courtesy of Lenka Perron
Dwight, a one-year-old greyhound, is treated at a veterinarian office for injuries he suffered after he fled in panic when a fireworks display went off near his family's St. Clair Shores home. The family said the dog was running so hard it tore all the pads off its legs. They believe he also may have been hit by a car.

Instead, it quickly turned into a nightmare.

While the trio was outside about 10:30 p.m., Perron said, fireworks erupted nearby, illuminating her entire backyard and bringing noises "like a succession of cannons."

Within a split second, one of the dogs, Dwight, a 55-pound rescue, panicked, squeezed through a gate slat and tore off toward Jefferson Avenue.

Perron and her family ran after him, tracing his bloody paw prints on the cement in their attempt to find him. Dwight was running so hard and scared, all of the pads on his paws ripped off, Perron said.

"His legs were in every direction in the air to get away," Perron said. "He dug his paws so hard into the concrete to accelerate his speed. A pad is still hanging on by a thread. The rest are gone."

After what felt like an eternity, but was probably about five minutes, Perron said, they found Dwight, who basically collapsed in her daughter's arms wounded, exhausted and overheated. He was covered in blood, urine and feces.

"I have never seen an animal in this stage of fear before," Perron said.

On Monday, Dwight was being treated by veterinary specialists in Bloomfield Hills and is in what Perron said is guarded, but stable condition. She said he's on a machine to keep his lungs inflated, has broken ribs and is wearing a cover on his eyes and a weighted blanket around his body to try to keep him calm.

More: Dog dies of heat in parked vehicle as man overdoses on drugs

Perron posted Dwight's story and photos on Facebook with the hope that "Dwight's story will cause people to change their behaviors around fireworks."

By Monday, Perron's initial Facebook post had more than 12,000 shares. She said she's hoping people using fireworks "wait until the appropriate time and location to use them."

In Michigan, fireworks can be shot off the day before, the day of and the day after 10 national holidays, with one of the busiest being the Fourth of July this week.

Local units of government can — and many do — restrict times that fireworks are shot off from midnight or 1 a.m. until 8 a.m. those days if they have ordinances, state Fire Marshal Kevin Sehlmeyer said.

He said people using fireworks outside the designated days and times can be issued a fine of up to $500 by local law enforcement.

Sehlmeyer said he can relate to the concerns animal owners have on weeks like this, when fireworks are more prevalent. His family's Labrador retriever gets nervous and shakes when fireworks and other loud noises sound.

He said his family worked with its veterinarian to develop a plan for their dog, who is sedated with medication around the holidays when fireworks go off. They also keep her in a quiet place in the house.

"When fireworks go off, she's definitely affected by it," Sehlmeyer said.

Felicia Asher, a licensed veterinary technician at Little Friends of Ferndale, said such anxiety "knows no age, no breed."

Asher, a certified dog trainer, said there is much that can be done for pets that are overwhelmed by the noise of fireworks and storms.

Owners can discuss drug therapy, trying out the medications before they need them to see how the animal responds and how long it takes before wearing off.

Owners who don't want to use medication therapy are encouraged to find safe, dark environments for the animals, such as a bathroom or basement, or throw a blanket over the animal's crate or table they are hiding under, Asher said.

Credit: Courtesy of Lenka Perron
Dwight, a one-year-old greyhound, is treated at a veterinarian office for injuries he suffered while fleeing in panic from a fireworks display near his family's home in St. Clair Shores. Onwer Lenka Perron said Dwight was running so hard he tore all the pads off of his paws. She believes he also may have been hit by a car after running into Jefferson Avenue.

She said music or the TV can drown out the outdoor sounds. A ThunderShirt, basically a compression suit for a dog or cat, may help, as well as pheromone sprays.

Most importantly, Asher said, is to not to leave the animal alone if the owner knows it will panic.

"You can do a lot of good by just sitting there and calming your dog," she said.

Asher said she has known of dogs to crash through windows from fear of fireworks and loud noises, She advises owners to make sure their pet is properly labeled with tags and licenses and to have numbers updated on their pet's microchip. She said animals have been known to break their teeth or rip their nails apart trying to escape the noise.

Asher said some signs of animal anxiety can include pacing, panting, drooling, scratching, trembling, ears being back, dilated pupils, finding hiding places and not eating.

"It's heart-wrenching to watch your pet panic," she said.Perron knows that first hand. She said Dwight squeezed his 20-inch-wide chest through a six-inch slat in the gate to escape. He may have been hit by a car or run into something on Jefferson and ran back and forth from home at least twice, Perron said.

Perron, her brother and her 18-year-old daughter ran barefoot trying to get Dwight, but couldn't get his attention amid the booms in the sky.

Perron's brother, a registered nurse, said to put Dwight into the tub with cool water to bring his temperature down once they collected him. Perron said as they sat at the tub, they could still hear the fireworks.

"We could not get his heart rate down," she said of Dwight. "It was like he was being attacked from multiple directions — fireworks, his injuries and the heat."

Perron said plans to talk with the police about the fireworks, which she said were shot off in violation of city ordinances and state law.

But her first priority is Dwight, who, despite his pain, still wiggled his tail when Perron and her family came to see him Monday.

"We hope that his spirit hasn't changed at all — that innocent playful spirit," Perron said, but "this is gonna change him."

Michigan Fire Marshal Kevin Sehlmeyer offers tips to people who plan to buy and use fireworks during the next several days:

Find an open area on your personal property to set off fireworks.

Get written permission to set off fireworks on someone else's property.

Don't set off fireworks at a school or other public places, including a roadway.

Keep a fire extinguisher, hose and bucket of water nearby. Soak what's left, including fireworks that turn out to be duds, to prevent a fire.

Light fireworks one at a time.

Keep children and pets away.

Don't buy from retailers who are not legitimate. There are close to 900 inspected facilities (tents and brick and mortar buildings) that have been inspected and certified to sell fireworks. Twenty-six citations have been given out statewide for various violations.