Boy in viral photo among 3 missing in cliff crash 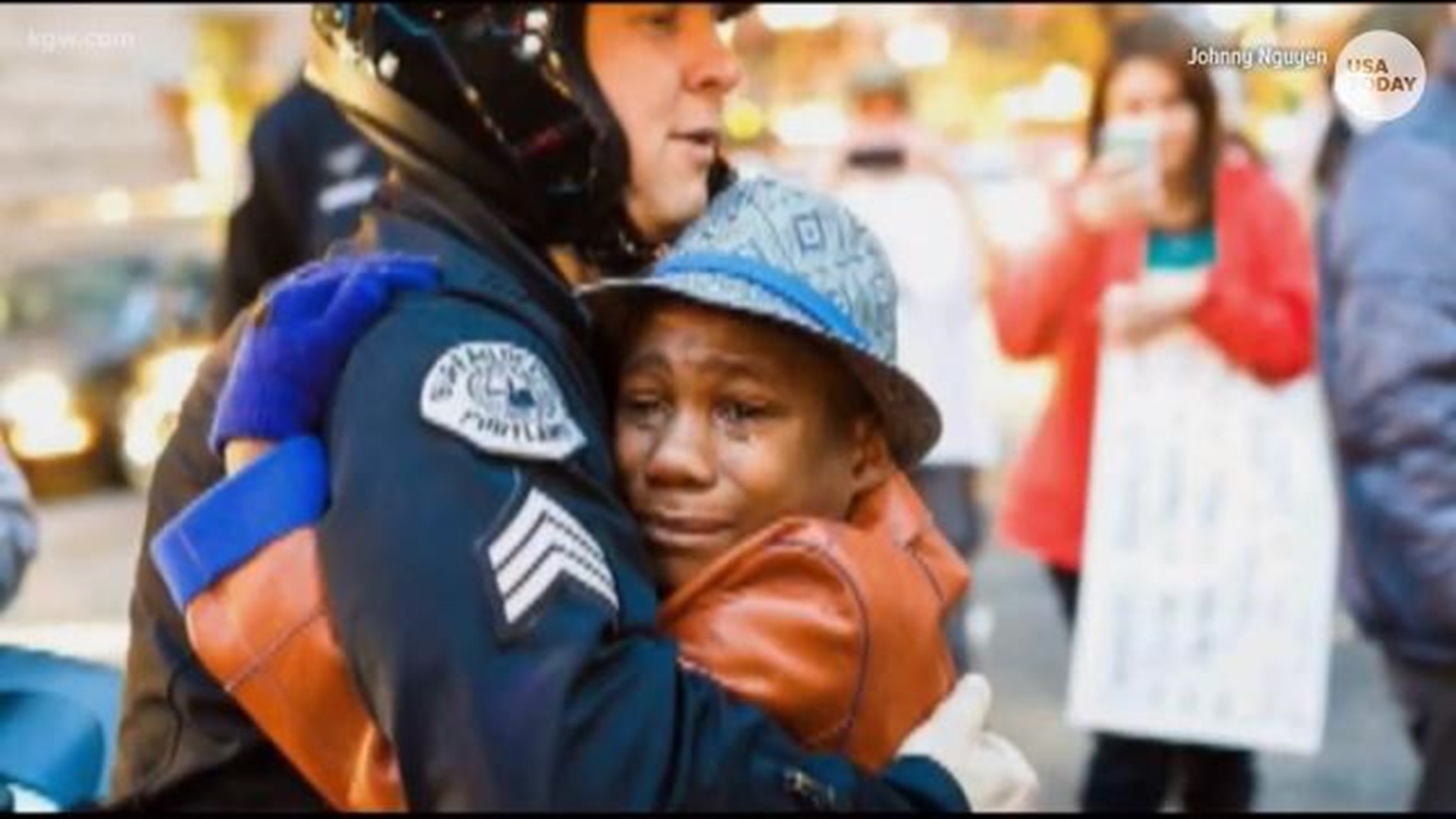 Credit: Chris Calder, AP
Investigators with the California Highway Patrol work at the scene where a couple and several of their children plunged in their SUV off Highway 1, Wednesday, March 28, 2018, near Fort Bragg, Calif.

PORTLAND, Ore. — Three children were still missing Wednesday after an SUV went over a cliff this week along the Northern California coast, killing their parents and three of their siblings.

One of the missing children is Devonte Hart, an African-American boy who gained widespread attention in November 2014 when a photo of him hugging a police officer during a Ferguson-related protest in Portland went viral.

Mendocino County Sheriff Tom Allman said investigators believe all six children were in the SUV during the crash, but a search is continuing as part of the investigation.

“We have every indication to believe all six children were in there; however, only three bodies have been recovered," Allman said.

According to the California Highway Patrol, Devonte's adoptive parents, Jennifer and Sarah Hart, both 39, died Monday when their 2003 GMC Yukon drove off a cliff on the Pacific Coast Highway, plunging about 100 feet into the rocky ocean. Devonte Hart’s siblings, 19-year-old Markis, 14-year-old Jeremiah and 14-year-old Abigail, were also killed.

Credit: Johnny Huu Nguyen, AP
In this Nov. 25, 2014, file photo provided by Johnny Nguyen, Portland police Sgt. Bret Barnum, left, and Devonte Hart, 12, hug at a rally in Portland, Ore., where people had gathered in support of the protests in Ferguson, Mo. Authorities have said two women and three children were killed Monday, March 26, 2018, when their SUV fell from a cliff along Pacific Coast Highway in Mendocino County. Hart is one of the three other children still missing after the vehicle fell off a cliff. He had gained fame when this picture of him hugging the white police officer during the protest went viral.

The two women were still in the vehicle and their children's bodies were found out of the vehicle.

Police are still looking for 15-year-old Devonte and his other siblings, 16-year-old Hannah Hart and 12-year-old Sierra Hart.

The California Highway Patrol has not determined why the vehicle went off the overlook. Investigators have no reason to believe the crash was intentional, he said.

Officials in Oregon and Washington, where the family has lived, have not been able to find the missing children at their home in a small city outside Portland, Ore., or with family members and friends.

Bill Groener, 67, was a next-door neighbor of the family when they lived in West Linn, Ore., and described the siblings as foster children.

Credit: Tristan Fortsch, AP
This March 20, 2016 photo shows Hart family of Woodland, Wash., at a Bernie Sanders rally in Vancouver, Wash. Authorities in Northern California say they believe all six children from a family were in a vehicle that plunged off a coastal cliff. Mendocino County Sheriff Tom Allmon told reporters Wednesday, March 28, 2018, that only three bodies of the children have been recovered. Their parents also died Monday.

“They were friendly enough. The kids were all home-schooled. They stayed indoors most of the time, even in really nice weather,” Groener told AP.

Devonte Hart, who was 12 at the time that the photo was taken, hugged Portland Police Sgt. Bret Barnum during a rally in Portland the day after a grand jury decided not to charge Ferguson, Mo., police officer Darren Wilson in the shooting of 18-year-old Michael Brown.

A photo of the hug, taken by freelance photographer Johnny Nguyen and first published on OregonLive.com, went viral and was shared several hundred thousand times on Facebook.

Barnum told The Oregonian he saw Hart standing in the crowd, with tears in his eyes and holding a sign that read, "Free Hugs." He called Hart over and they talked briefly about the protest and other topics, like art, school and life. He then asked Hart for a hug.

Zippy Lomax, a Portland photographer who knew the family, told The Oregonian/Oregonlive.com that the reaction to the photo overwhelmed the Harts, with negative attention focused on the multiracial family with lesbian parents.

“They kind of closed off for a while, honestly,” Lomax told the newspaper.

She said the Harts frequently traveled to festivals and shows and that “Jen and Sarah were the kind of parents this world desperately needs.”

“I’m sure they were going somewhere special and fun,” Lomax told the newspaper.