A witness told KGW he first saw the flames from Woodburn, almost 20 miles away. 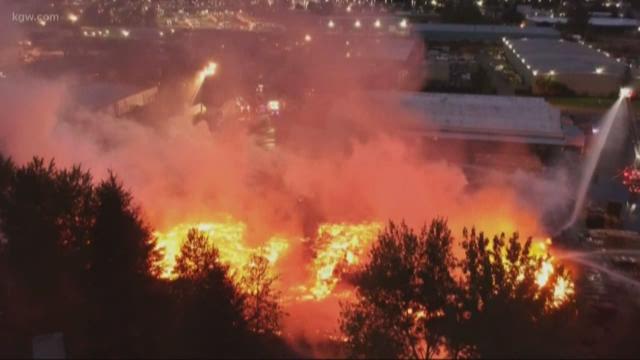 The fire started about 3 a.m. There have been no reported injuries. The fire was contained mostly to the pallet yard, Deputy Chief Gabriel Benmoussa of the  Salem Fire Department  told KGW.

The fire appears to have started in some grass across railroad tracks from the business, spreading to the pallets, he said.

Owner Carly Taylor told KGW she got a phone call that "the entire yard was on fire."

She was glad that the fire broke out at an hour when regular employees were not at the workplace.

She estimated damage in excess of several million dollars. Several vehicles went up in flames. The company "has good insurance," she said.

A witness, Joe Jackson, told KGW he heard several explosions. Workers headed to the facility said there were several containers of fuel at the site.

Jackson said he first saw the flames from Woodburn almost 20 miles away.

The National Weather Service released an image from its NOAA's GOES-17 Satellite Imagery that shows the fire.

"This fire happening in Salem right now is apparent on GOES-17 Satellite Imagery via the dark pink/purple spot shown on the image attached. The whiter areas are low clouds. The lighter pink/purple areas are cloud free," the NWS said said in a tweet.

The flames were also shared by passerby Kyler Kelly.