The store won't have any plastic bags, and they'll aim to not waste any food at all. 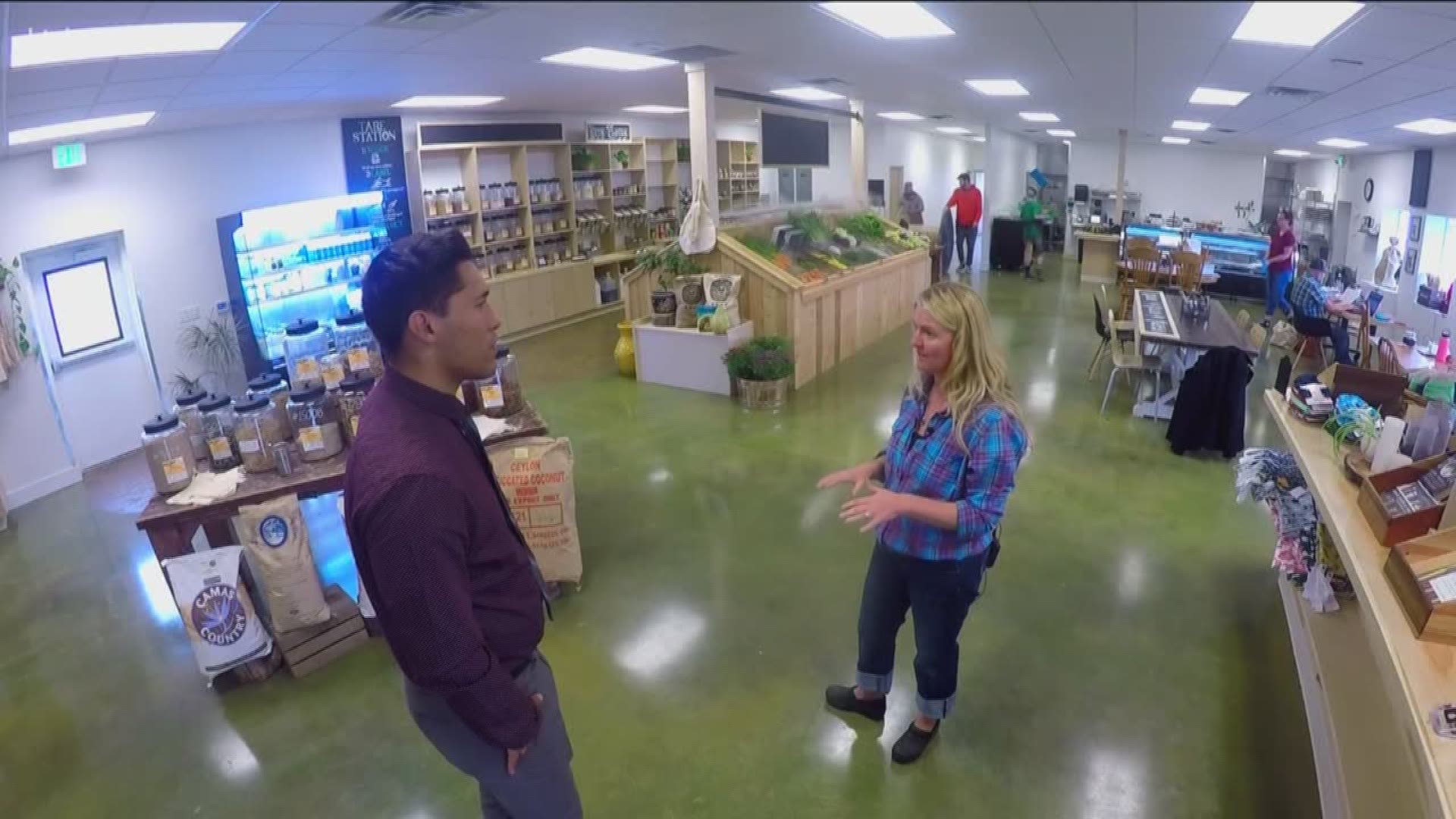 GARDEN CITY, Idaho — A market that is perhaps the first of its kind in the country is getting ready to open up to customers in Garden City.

Lea Rainey and Zach Yunker own Roots Zero Waste Market. The couple was tired of dealing with plastic, so they focused their efforts on running a store that is all about reusing and reducing waste.

For Rainey, the zero-waste thought process goes back to her childhood. Her parents told her to finish her plate of food at the dinner table because they didn't want to throw it out. That concept has evolved over the years and resulted in a grocery store that is designed to combat plastic and food waste.

"I'll just be clear, no one can get to zero, but we use that in our name as a reminder,” Rainey said. "We believe that we can make an exponential impact on the environmental crisis we have with plastics and food waste."

That impact starts inside her store. Where instead of finding food in pre-packed, single-use plastic containers that consumers buy and then bring home, she offers consumers a chance to skip the plastic.

"About four to five years ago I really started to get frustrated with plastic and having to deal with it all the time,” she said.

She worked to open a store that uses as little plastic as possible and the plastic she does use is reusable.

"The principals of zero waste are refuse what you don't need, reuse what you do, reduce what you also do need, recycle, and rot [compost],” Rainey said.

Those principals are used throughout Roots Market, not only for the plastic use but also when it comes to food.

"We don't waste food here, no food goes in the dumpster,” she said.

Instead of wasting it, the store finds other ways to use the food. She also works on not overbuying food that may go bad on the shelves.

"If someone drops an apple here, it’s okay, we'll take it and juice it and use the pulp of that juice and make it into a muffin or cake,” Rainey said.

There is a café inside the market, and that is another big part of cutting down on the waste.

"For us, I can say 'hey, I can see no one is really buying that so let’s make a recipe out of it in the deli,'” she said. “Help educate and help people understand what that food might be able to provide to them.”

1 / 6
Paul Boehlke/KTVB
Roots Zero Waste Market in Garden City is a first of its kind in Idaho. The new market is focused on reusing and reducing waste, especially plastics.

A mainstay in traditional grocery stores are plastic bags. They are at the checkout lines and in the produce area. At Roots, consumers won’t find any of those. Instead, they’re encouraged to bring their own containers and reusable bags. If someone doesn’t, it’s no big deal because the market does have recyclable or reusable containers and bags for customers to use.

Once someone has their container, they weigh it and write that weight on the jar itself. They will then go and fill it with whatever they need, whether it be pasta or a variety of other foods and cooking ingredients.

“As long as it’s clean you can bring it in, as long as you can fill it, you can use it,” Rainey said.

MORE: Here's how the plastics you toss in Boise's recycling bins can actually become fuel

One of the ways Roots is cutting down on plastic waste is by working directly with manufacturers. Rainey pays a deposit on the big plastic containers she gets from her distributors, and then once she is done using it, she returns it to them. That company will sterilize it and then either send it back to her or someone else to use.

“We're at a good time for us because actually that supply chain is growing and it's getting better and that’s another nice thing about it,” she said.

This kind of full-service grocery store that has minimized waste is rare. The store offers consumers everything from fresh produce, organic pasta and oils, dairy products fresh from the farm, and house hold items, like soaps, shampoos, and detergents.

"Definitely first in the Northwest, for what we offer we're really the first in the US right now,” Rainey said.

One of the only things people won’t find in the store is meat. Rainey told KTVB that's because she doesn’t have space for a butcher at this time.

The end goal of the zero-waste market is to change how people shop for groceries.

“We're trying to start this refill or reuse revolution.”