A viral video shows an argument between a Yoke's employee and an unmasked man at the Spokane location. The chain said it's investigating the incident. 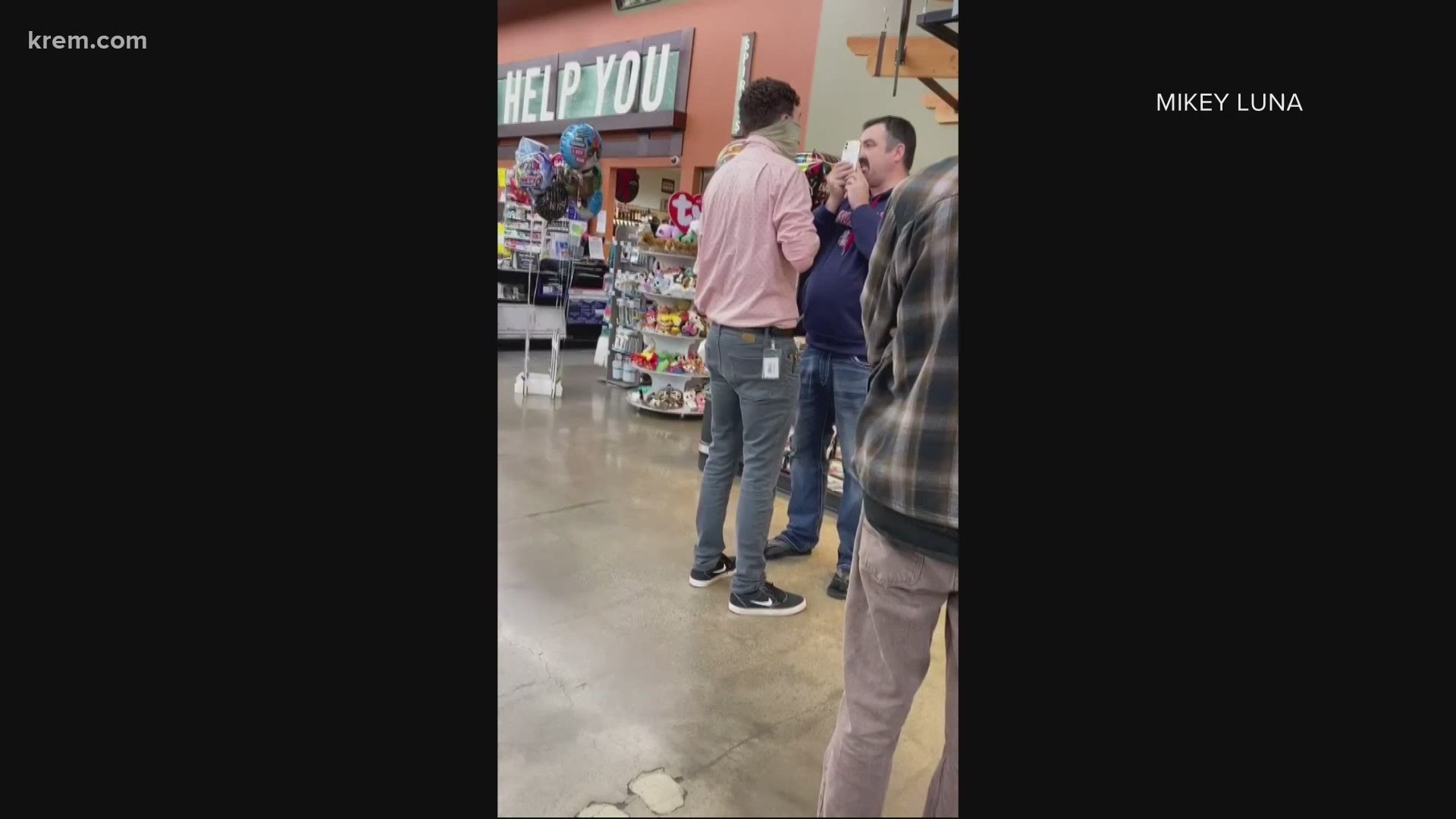 SPOKANE, Wash. —  An employee of Yoke's Fresh Market in Spokane is "no longer with the company" after an altercation between them and an unmasked shopper at the North Foothills location, according to a statement released on Monday.

Several KREM viewers sent a video of the incident, which shows a Yoke's employee confronting an unmasked shopper demanding that he leave the store. The shopper's phone was thrown on the floor. In the video, several others are also standing around and yelling at the man to leave.

The company called the incident "disappointing" in the statement and said in part that the way it was handled "does not reflect our values or standards of services."

"As disappointing and challenging as this situation is, we see an opportunity to use this as a teachable moment across all of our stores and learn from it," the statement reads in part.

The full statement from Yoke's is available to read at the bottom of this story.

In a Facebook post on Saturday, Oct. 17, the company wrote that it was "in the process of collecting information" about the incident and "speaking with those involved" before taking action.

KREM spoke with Mikey Luna, who shot video of the confrontation, and the customer involved, who asked to only be identified by his first name of Scott.

"I started recording because I couldn't believe what was happening," Luna said

Scott said he had a stroke that prevents him from wearing a mask.

"I have a medical condition. I had a stroke when I was 34 years old and I'm 42 now. The stroke was caused by a blood condition. If I don't get enough oxygen or keep myself hydrated well enough, I could have another stroke," Scott said.

Scott told KREM that he told the employee he was exempt but the employee kept asking about his medical condition.

Scott also said he requested curbside service, which was denied.

The video shows that the unmasked man is forced to leave the store and a man can be heard saying, "Now you don't get to come back."

A second video shows that the altercation continued into the parking lot, with one person throwing an object at the unmasked man.

Scott said he would tell the employee in question that he forgives him if they meet again.

Yoke's full statement released on Monday night is as follows:

"On Friday evening there was an incident that occurred between a Yoke’s Fresh Market Associate and a guest who was not wearing a protective face mask inside our North Foothills location. At Yoke’s, we strive to create a safe environment for everyone in our stores and so this incident, as we’ve reviewed it, was disappointing.

This is a challenging time for our store associates. They’ve found themselves suddenly placed on “the front lines”—working to provide essential items for our community while being questioned on a daily basis for their role in observing the State’s mask mandate. Overwhelmingly, in even potentially volatile situations, our people get it right. In this case, the way the situation was handled does not reflect our values or standards of service and the associate involved is no longer with the company.

As disappointing and challenging as this situation is, we see an opportunity to use this as a teachable moment across all of our stores and learn from it.

For our guests, we will follow all guidelines and of course honor any medical exemptions that prevent the wearing of protective masks in our stores. We will also continue to expand alternatives like curbside pickup and online shopping. Both of those options can be found on our website at YokesFreshMarkets.com.

We look forward to continuing to serve our communities during these challenging times and hope that, together, we can grow from this situation."

Face masks are required to be worn in Washington state in all indoor public places, and also outdoor areas where social distancing isn't possible. The Spokane Regional Health District confirmed that businesses can ask a customer if they have a medical condition exempting them from wearing a mask, but customers don't have to disclose anything else.

Yoke's Fresh Market doesn't specify on its website what accommodations are available for those who can't wear a mask.