A gesture of support and goodwill for those involved in a deadly officer-involved shooting late last year. 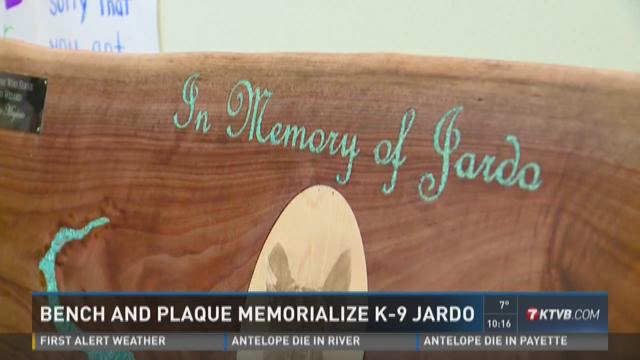 BOISE - A gesture of support and goodwill for those involved in a deadly officer-involved shooting late last year.

A pair of local woodworkers created a custom bench and plaque for Boise Police K-9 Jardo - who died from complications after he was shot by a suspect on the Boise Bench in November.

The shooting also left two officers injured, one of them seriously, and the suspect dead.

The bench and plaque were presented to Boise Police on Tuesday. The bench reads, "In Memory of Jardo. He Gave His Life in the Line of Duty."

"I'm a firm believer that we need to support our people in service," said bench builder Steve Maglecic. "Our men and women - whether its in the military, the police department, fire department - we need to support these people, and when some of them lose their lives and get hurt in the line of duty, I think we need to stand up and help them.

The plaque and bench memorialize Jardo's sacrifice and honors the work of all police officers.