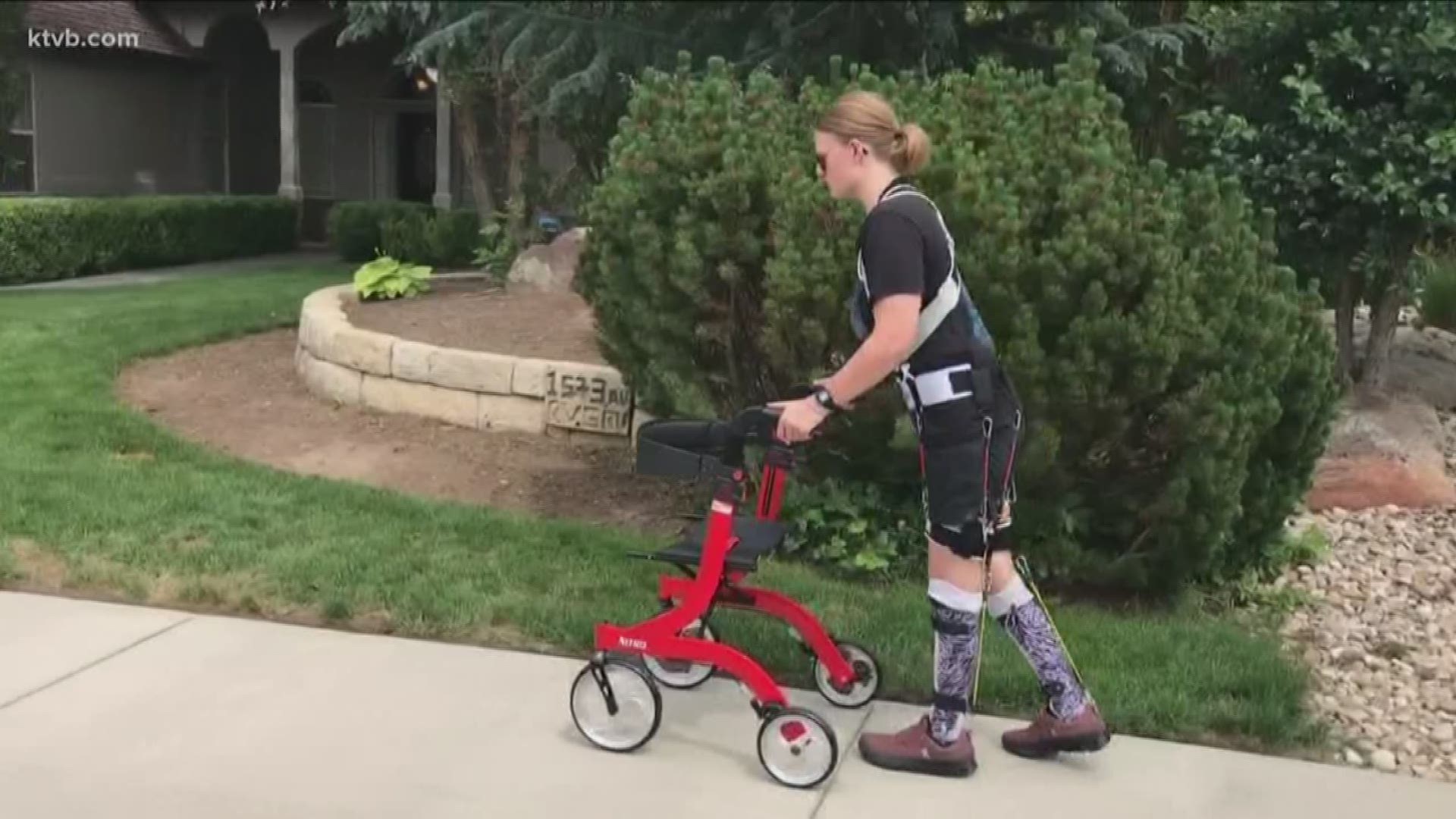 BOISE, Idaho — Eight months ago, a helicopter crashed in Malheur County, killing a man and injuring his daughter. Now, after fracturing her spine and losing some control of her muscles in her legs because of severe nerve damage, she is learning to walk again with the help of her physical therapist and a San Diego-based company.

For the first time, Jordan Valentine is speaking out about her father and what her journey has been like since the helicopter crash.

"We were flying in a helicopter in the Owyhees and something went wrong with the helicopter we still don't know and we crashed," she explained to KTVB over Facetime.

Her father, Jim, was a surgeon at St. Luke's Medical Center and died in the crash.

"He was such a caring, caring guy. He was a surgeon and saved people's lives for a living, he was adventurous and silly, he was a good guy," she said.

Jordan waited 16 hours in freezing temps for rescuers to find her and the crash site. For those 16 hours, Jordan found resilience to fight for her survival.

"Throughout the night and watching the sunset, I just remember being really appreciative of how beautiful the gradient and the colors of the sky and all of the stars and I just kept thinking, I have to keep fighting, my dad, he would want me to keep fighting," she said.

Months after the crash, Jordan is still fighting with the help of her physical therapist, Katie Callahan.

"Jordan has, she not only had the fractures in her spine, but it affected the nerves that exit her spine, so she lost control of a lot of the muscles in her legs and some of that control is coming back as the nerves regenerate," Callahan said.

She said when she first met Jordan, Jordan had one goal - to walk again.

"So we got to the point where she was able to walk with the walker, I still had to stabilize her leg, we got braces to help stabilize her through her ankles, and then we were just starting to get her started on the treadmill that has a harness system," Callahan explained.

The coronavirus pandemic then forced their clinic to shut down, which put a stop to Jordan's progress. To help her continue her journey, Kim Spranger and Benga Adeeko introduced Jordan to a sports device called Newgait.

Jordan's chance encounter with Spranger and Adeeko allowed her to use a modified Newgait, which was reworked to help people with gait, pain and balance problems, and injuries like Jordan's.

Despite the ongoing pandemic, Jordan has managed to keep up her progress with Newgait and video technologies like Zoom.

"It's just been slow, slow progress. Every week it feels like I'm getting better but it's just very minute changes," she said.

The 26-year-old is still fighting - just like her dad would have wanted her to.

"Now that he's gone it's amazing to see how much he did for everyone," she said.

It's unknown how long Jordan will have to wear the device before she's able to walk on her own.

Callahan said Jordan likely faces years of work ahead of her, but this device is helping her relearn how to move correctly.

Jordan also told KTVB that her goal is to finish the 140 mile stretch of the Pacific Crest Trail, which runs from Mexico to Canada, that she didn't get to finish before the crash.