The Big Burn of 1910 scorched 3 million acres across Idaho and Montana: 'People were running for their lives'

"I think the 1910 fires, probably the longest-lasting impact is that it really lead to the professionalization of wildland firefighting," an official said. 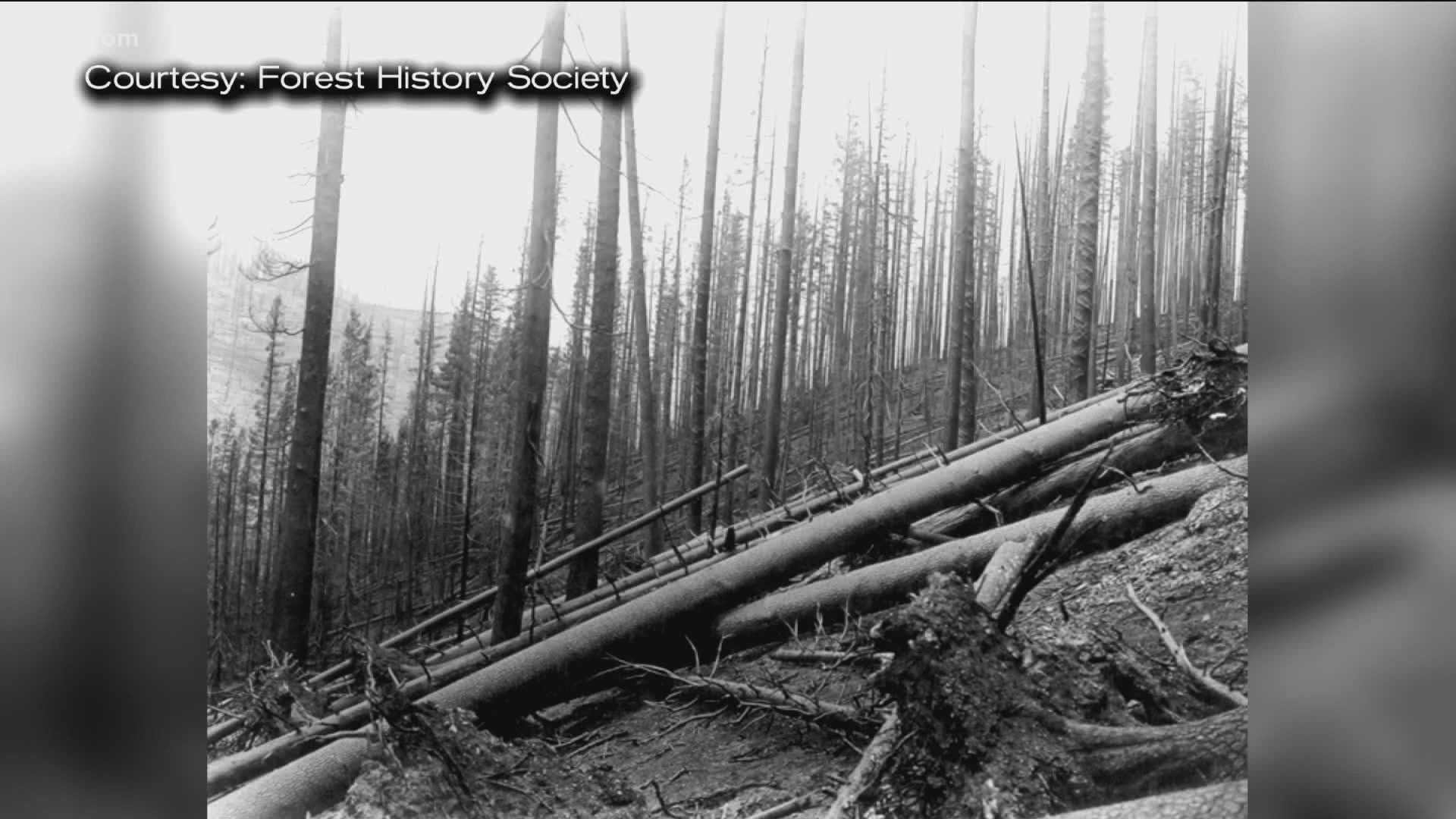 BOISE, Idaho — In 1910, one of the greatest natural disasters of the 20th century charred three million acres of land across North Idaho and Western Montana. More than 100 years later, "The Big Burn" still has lessons on fighting wildfires to teach.

KTVB spoke with retired forester Darrel Kenops in November 2015 about his extensive knowledge of "The Big Burn."

"Places where it looks like a great big black ball of fire rolling through the country," said Kenops, who oversaw firefighting efforts during his 40-year career.

"All they heard was the wind, the tremendous roar, the trees falling all around them. You know where do you go? What do you do?" he explained.

RELATED: 'It really was a firestorm': How Idaho's 'Big Burn' fire of 1910 shaped the way wildfires are fought today

"The Big Burn" first swept through a third of Wallace and destroyed whole small towns.

In 1910, the National Forest Service was only five years old and Kenops said the agency's future was "iffy" because of political battles but "The Big Burn" was a big reason it survived.

"I think the 1910 fires, probably the longest-lasting impact is that it really lead to the professionalization of wildland firefighting," said U.S Forest Service spokesperson Jennifer Jones.

Jones told KTVB in 2015 that there was now a total force of 15,000 federal, state and local firefighters across the country, who are now facing a longer and more dangerous fire season.

"Our fire seasons are getting longer. They're about 70 days longer on average now than they were in the 1970s, 1980s," Jones said. "We're having more frequent fires. They're getting larger and they're burning more intensely."

The devastation of "The Big Burn" lead to the policy of putting out all fires as fast as possible.

Jones said the thinking started to let fire play its role in the environment changed in the '70s.

"When we could, either by ignited prescribed fires or by managing some lightning-caused fires to achieve natural resource management objectives," she said.

The Boise Forest Coalition is a diverse group made up of representatives from the Boise National Forest, timber interests, local governments, citizens and conservation groups, including the Idaho Conservation League.

Among other things, they looked at the best ways to reduce the risk of wildfire. The ICL advocates targeted thinning around homes, cautious burning and community planning.

"A lot of people want to have their place out in the woods away from it all where they can kind of escape and have a little haven, and that's great, but there's also responsibility that we all have living out there," Jonathan Oppenheimer with the Idaho Conservation League said.