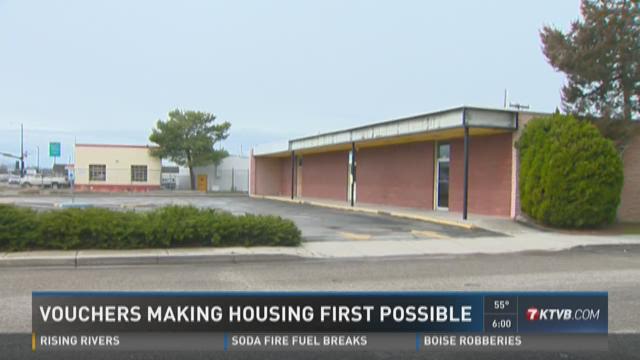 It's been just over a year since the city of Boise and Mayor Dave Bieter launched their Housing First Initiative. It's a program aimed at putting some of our community's most vulnerable into housing, and then providing wrap around services to help them. In November, organizers were able to gather the funds to lay the foundation.

On Thursday, they were able to secure the complex's stability.

"This is really kind of shores up the long-term stability of the property," Roope said.

The voucher will cover a majority of the tenant's rent. However, if the tenant does have an income, they will have to pay a portion with the rest being subsidized by the voucher.

These 40 vouchers are not new, the Boise City/Ada County Housing Authority already hands out about 2,100 Section 8 vouchers, but not every apartment complex takes them.

"It has become increasingly more difficult to find affordable units for people to utilize, to use their vouchers," Housing Programs Director Jillian Patterson said.

That's why the housing authority decided to take 40 vouchers from their stockpile and tie them to the New Path Community Housing project.

"So we're still serving the same population, we just have an additional resource so people can use the rental assistance faster," Patterson said.

Who gets those 40 vouchers to live in the New Path Community will be based on need.

"They'll refer people to the program based on the level of need, and then it's through, what they call, a coordinated entry system, which will be a new sort of community waiting list for people experiencing homelessness," Patterson said.

The complex will be four stories and include 40 single-bedroom apartments, interview rooms, case management rooms, and common areas. The site is at 2200 W. Fairview Ave., where the Twin Dragon restaurant used to be.

"Without the income source from the housing authority's program, the property simply just doesn't have any income to support the operating costs of the building," Roope said.

All helping to provide housing for some of our community's most vulnerable.

"The getting the thing built and stabilized long-term, in terms of the operations of the building, has been accomplished," Roope said.

Roope added that this was the last major financing obstacle. He says as long as everything goes according to plan, they plan to start construction this fall.