Boise State's new president is in the process of developing a long-term vision for the university. 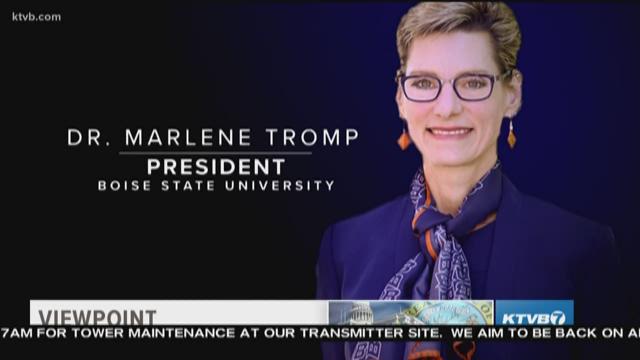 BOISE, Idaho — New Boise State President Dr. Marlene Tromp is settling into her new job and developing her long-term vision for the university.

In the first two-and-a-half months, Dr. Tromp says she has focused on learning all she can about the state, the community and, of course, the university.

She sums up her long-term vision for Boise State with two words -- national leadership.

"Because I think we have the ingredients to show people how to move forward in a number of areas,” Dr. Tromp said. “We've already been so innovative. We've just moved up several points in the national ranking for innovative universities. So, this is alongside the likes of Stanford and MIT, we've moved up in those rankings again this year."

With the high and rising costs of college, Dr. Tromp says she will focus on ways to be more efficient to reduce costs for students, as well as on fundraising for things such as scholarships.

During the taping of this Sundays' Viewpoint, Doug Petcash also asked Dr. Tromp about her passion for writing and Victorian-era history.

She has been working on a book about unsolved murder cases from the 1800s.

“I have one case in which a woman, the only female Jack the Ripper suspect was accused of murder, but only belatedly did people discover she was actually one of the people who identified the body of the victim," Dr. Tromp said. "She went with the family to identify the body of the victim. She was only belatedly discovered to have been the murderer even though her kitchen was just coated in blood."

She says she is almost finished with the book but does not know how long it will be until it is published because she is fully focused on being Boise State's president.

This Sunday morning at 6:30 on Viewpoint, hear more about President Tromp's vision for Boise State, what she hopes to help the university become during her tenure and her writing.