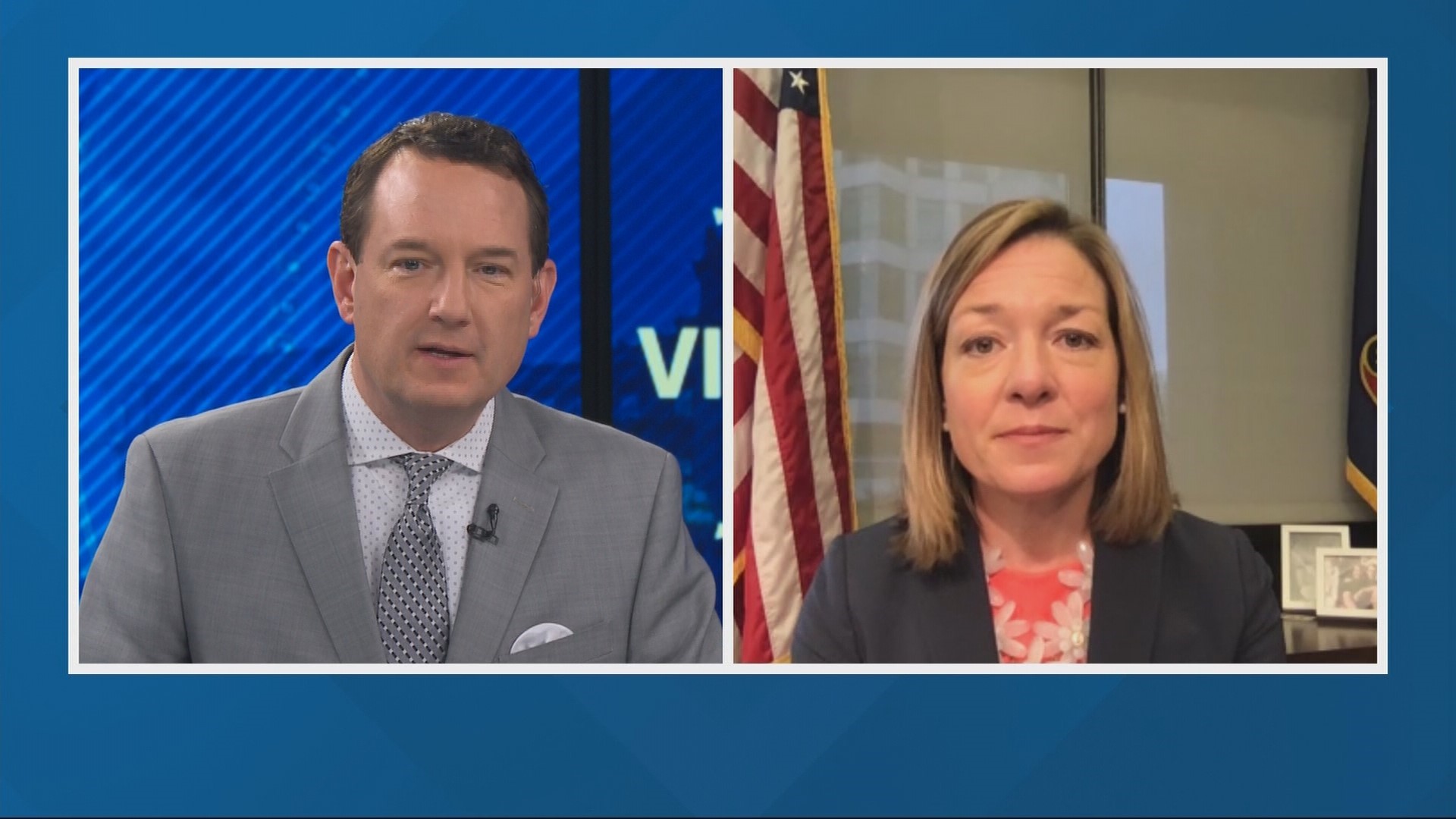 BOISE, Idaho — More people are getting out and about to go to work, to do some shopping or go to parks now that Idaho is in phase one of the plan to reopen the state and get the economy rolling again.

The City of Boise is also in phase one of its reopening plan.

Parks are open, retail businesses are opening back up, Warm Springs Golf Course has partially reopened, and the city is ramping up recycling services as well as maintenance at facilities and parks.

But public events are not allowed and city hall is still closed to the public as staff mostly work from home.

Doug Petcash: What is your goal with stage 1?

Mayor Lauren McLean:  My goal with stage 1, I should say the city's goal with stage 1, is very similar to the governor's, and that is to safely begin to get our community back to work. We've done all we could and have seen great success in ensuring that there wasn't a surge of the virus that the hospitals couldn't meet the demand of, and so now it's time to slowly reopen our community and get our residents back to work.

Doug Petcash: So how does your plan differ from Governor Little's plan to reopen the state?

Mayor McLean: We're in the same stage and we'll look at the same data the governor is looking at in assessing when to move to stage 2 and then to stage 3. We have specifics related to how city hall and city government services open, and then also require in stage 1 social distancing measures and have some specific rules about the airport, who can be in and out of the airport as people start traveling again to make sure that we can keep the spread of the virus slow, so we can get as many people back to work as quickly as possible.

Doug Petcash: Unlike the state plan, the city's plan doesn't have target dates for each stage. Why not?

Doug Petcash: Does the city's plan have tighter restrictions on which businesses can reopen when?

Mayor McLean: We have not called out businesses or groups or others. Instead we've talked about the requirement that you socially distance in phase 1 at the current time.

Doug Petcash: Will you allow things like salons and spas, dine-in restaurants, gyms to open on May 16 as the state plan allows or is that on an individual business by business basis?

Mayor McLean: Well, I want to point out again that the state plan says they'll assess the data on or about the 16th, and if the data show that we can move to stage 2 then the state has called out those businesses as being allowed to operate. We will look at the data at the same time and if it tells us that we should move to phase 2, we'll look at our social distancing order and determine the steps that need to be taken to allow businesses to open in phase 2 in a safe way to protect the public health. What we want to do is allow all businesses to open and people to get back to work, and not have to take that away if we inadvertently create a virus spike here in the valley.

Mayor McLean issued a public health order requiring six feet of social distancing that runs through the end of May. That order applies to the popular city parks and ponds, too.

Doug Petcash: City parks are open, but as you've mentioned, people will have to practice social distancing. How do you plan to enforce this especially at places like the popular ponds?

Mayor McLean: The ponds, especially as we move into summer and it's been hot even recently, our bike patrol is going to be out more and more in the parks along the water. We're looking at hiring more or re-purposing city staff to have a larger patrol on bikes that will be out and about at the parks along the river making sure that people are distancing. Because the last thing we want to do is that because we played so much we prevent ourselves from being able to work, and that's the most important part of this, is that those who need to get back to work are able to and so we'll take steps as a city to focus first on providing services and protecting public health so that the economy can reopen.

Doug Petcash: So could you actually take a step of shutting down the ponds if you see that people aren't cooperating?

Mayor McLean: We've said all along that if it gets to a point where it's so bad that we can't control and we see data that's telling us that the virus is spreading, closing the parks in summer, closing the ponds, if we have to do it we will. We'd rather not. And we all love those facilities so much. So it's so important that the public cooperates with us and helps us out.

Doug Petcash: Are you having any second thoughts about keeping the city's public pools closed this summer?

Mayor McLean: That was a super tough call. My own kids were frustrated that the pools wouldn't be open. They grew up on the swim team at Lowell Pool and at the Natatorium. We love the pools. Here's the thing with the pools. The Parks Department presented information where we looked at the realities of being able to keep kids separated when you've got young lifeguards just trying to keep kids safe and the budget impacts of getting the pools ready to open, not being able to allow as many people in, and then potentially not being able to open for a full season.

Mayor McLean says the Parks and Recreation Department told her that many public pools across the West are staying closed for the same reasons.
The mayor also said it's hard to predict if large public events will be able to be held later this summer. They will be looked at on a case by case basis because they will still have to ensure that social distancing can be practiced.

Doug Petcash: Mayor, has the coronavirus situation and the statewide emergency had an impact on city finances?

Mayor McLean: It has definitely had an impact on city finances because there have been expenses we've had that we didn't expect. But I am so happy to say that because of the sound fiscal management of our finance team we've been able to weather the storm, look at some things that we needed to cut, but most importantly have the funds necessary to provide community services that came up as we were shut down and people were getting sick. The 2021 budget as we're working to fill that out, there will be a large loss in sales taxes. The state shifted the way sales tax is given to cities, and we were going to be hurt in that to begin with. But now we have the double whammy of less sales and so less revenue that will come to us as a city. And then of course we have lost revenue from programs that we had to close from March onward, golf courses, rec classes, different camps and activities. All of that impacts our budget. The CARES Act will provide for reimbursement of expenses that we've incurred directly related to COVID, however, the revenue we've lost won't be reimbursed by the federal government. So we're trying and having to shift resources around to make sure that we can continue to provide essential services and that we can make the investments necessary to recover strongly as we move beyond COVID-19 here in Boise.