Education, the budget, deregulation, Medicaid expansion and trade are a few of the major issues the governor is focused on now and for the coming year. 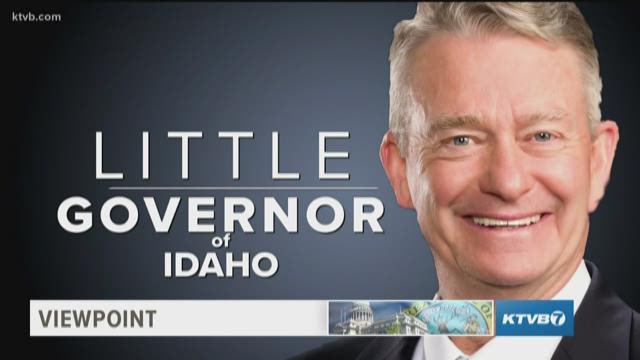 Gov. Brad Little will deliver his second State of the State address on Jan. 6, the first day of Idaho's 2020 legislative session.

The governor is now working on that speech, in which he'll lay out his priorities for his second year in office.

During the taping of this week's Viewpoint, Doug Petcash talked with Governor Little about his top priorities, his overseas trip to boost Idaho business and his recent meeting in the White House with President Trump.

On Nov. 16, Little and other governors joined President Trump at the White House to talk about deregulation.

"You know, what do we do next? What are the next steps? What do we do in licensing?" Little explained the meeting topics.

Trump had asked states to eliminate two rules for every new rule put on the books.

In Little's first year as governor, Idaho has cut or simplified 75% of regulatory rules.

Little says that eases a complicated and cumbersome burden on businesses.

"That's why we've really simplified our rules process to where it's friendly, not only to the small business but to the consumer," Little said.

Since during his campaign for governor, Little has said education is priority number one. He says it will be this legislative session, too.

"My goal of having prosperity here for all of us, for all children, is dependent upon the kind of education they get," Little said.

"We've got to get these kids reading proficiently by the end of the third grade," Little said. "Everything else kind of tracks behind that, and we're making good progress in that direction right now."

Health coverage for tens of thousands of Idahoans kicks in January first under voter-approved Medicaid expansion. It will be a big issue again this year.

"People will be enrolled. People will be getting benefits, and then this session we'll talk about how we fund it going forward," Little said.

These major issues continue to develop as the governor and other state leaders keep a close eye on the budget. The reason? State tax revenues are coming in lower than expected.

"We're doing a reset in spending and we told the agencies early," Little said.

In November, Little told most state agencies to cut their budgets by 1% and identify another 2% that could be cut in the coming year.

"That means going forward we'll have more revenue available for either tax relief or for doing big, bold initiatives in education or transportation or whatever that is," Little said.

He led his first international trade mission as governor.

He and a delegation of state leaders and business leaders went to Taiwan and Hong Kong.

"Some of them got orders. It takes a while after a trade mission to really see the fruits of your labor, but we were pleased," Little said.

And heading into 2020, Governor Little says the biggest challenge facing Idaho is something on the minds of many... growth.

"Transportation, housing, crowding in schools. Those are all things that I know we're going to have a dialogue, that the Legislature will have a dialogue about," Little said.

The governor says the next trade mission will be to either Mexico or Canada, which are the state's largest trading partners.

He said he is also in discussions with legislators about giving Idahoans some relief on grocery taxes.