Kay Beard came to San Antonio for multiple sclerosis treatments last week. Her custom truck was stolen from the parking lot of the hotel where she was staying. 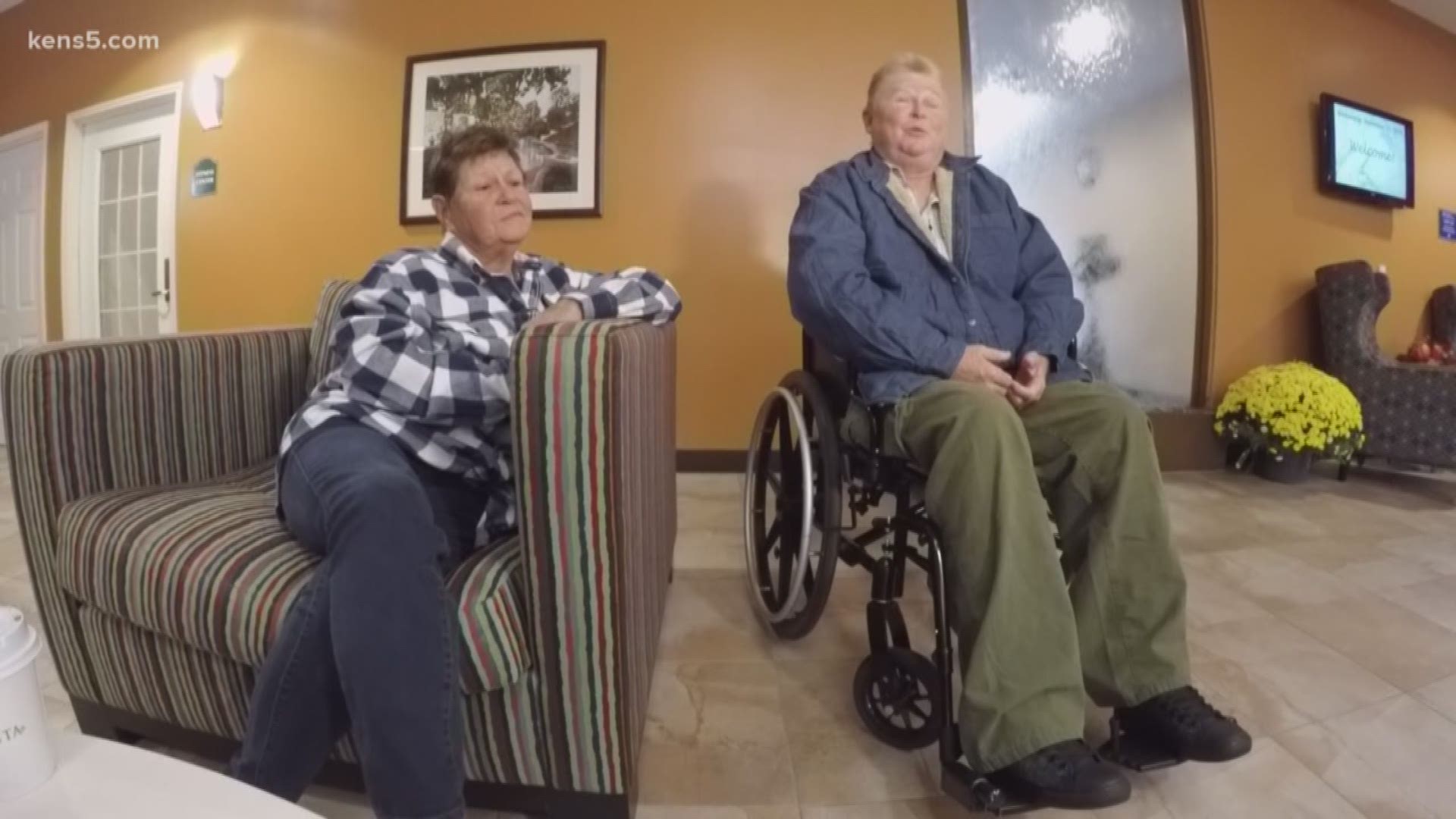 SAN ANTONIO — Military veteran Kay Beard served in Operation Desert Storm defending our freedom. In a matter of minutes, a pair of thieves stole hers.

According to a San Antonio police report, last Wednesday, thieves took her wheelchair-accessible truck from the parking lot of a La Quinta Hotel in the Medical Center. Beard, who lives in Rockport, was staying at the hotel as she received treatment for multiple sclerosis at the VA.

Beard said her sister-in-law, who accompanied her for the trip, had picked up food and brought it back to the hotel. Beard's sister-in-law, she said, didn't see open handicap parking, and instead, parked on the side of the hotel, taking up two spaces so Beard could get into the vehicle later.

After eating, Beard's sister-in-law went back out to the truck and the customized 2012 Dodge Ram 1500 was nowhere to be found.

Thinking the truck had been towed because it was double parked, Beard's sister-in-law checked with the hotel staff, who told her they didn't have the truck towed.

"(Hotel staff) went back and looked at their security cameras and they did see people breaking into our vehicle and driving it off to the back of the lot," Beard said.

According to a police report, officers were able to get a description of the suspects and the vehicle they were in, and put out an alert to officers to be on the lookout for Beard's truck.

But a week later, Beard's truck has yet to be spotted.

The thieves made off with more than just the truck. Beard had her manual wheelchair and thousands of dollars worth of medical equipment in the truck.

“When you look at somebody that’s already having trouble and they steal the only mode of transportation you have, it just totally upsets me,” Beard said.

She said that while the thieves may not realize that they've taken everything from her, she doesn't think they feel bad about from whom they stole.

With no way of transporting her motorized wheelchair back to Rockport, Beard was stranded in San Antonio last week. The staff at La Quinta, however, helped ease Beard's loss, allowing her to stay at the hotel for free as she figured out how she would get back. Beard was, again, on the receiving end of an act of kindness. Though, this time, from Mobility Works of San Antonio.

"They gave us a van for a week to get my power chair back to Rockport where we live,” Beard said.

Beard left San Antonio on Friday but Beard and her wife, Paula Beard, returned to San Antonio on Wednesday for more doctors appointments and to return the van to Mobility Works.

The pair brought along Kay's manual wheelchair, which fits in the regular vehicle they intend on renting after returning the van.

They said their insurance company will intervene if police are unable to locate Kay's truck in a few weeks. As for the medical equipment, the pair said they will have to file a claim through their home insurance and their deductible is a few thousand dollars — approximately the same cost of purchasing a new, fitted wheelchair.

In the meantime, without her truck, Kay will need help getting around.

"They have taken my independence completely away from me," Kay said. "Now I have to, again, depend on someone else to get me where I want to go when I was able to do it by myself for so many years. Now, I'm back to where I started from."

The Beards had a concession to the thief, saying they could return it to the hotel, no questions asked.

"If they could pull up right now, right here in front of this La Quinta hotel and leave that vehicle right there, I would absolutely say, 'Drop it off and we'll take the rest,'" Beard said.

The theft has put the couple out of several thousand dollars as they try to repurchase what was taken from them. La Quinta hotel staff helped the couple set up a GoFundMe to ease the burdens of the costs.

The Beards didn't have any photos of the truck, but described the vehicle as a 2012 green-colored Dodge 1500 truck with a camper on the truck bed. The truck is outfitted with a driver's side seat lift to get herself in and out of her truck, in addition to special hand controls that allowed her to drive.

Anyone with information about the theft is urged to call police.

RELATED: Neighbor helps deputy take down suspects: 'It was an attack against my own people'

RELATED: Blade of glory: The mystery around a late president's sword