We are verifying the new campaign attack ad from Brad Little's campaign that targets his two Republican opponents. 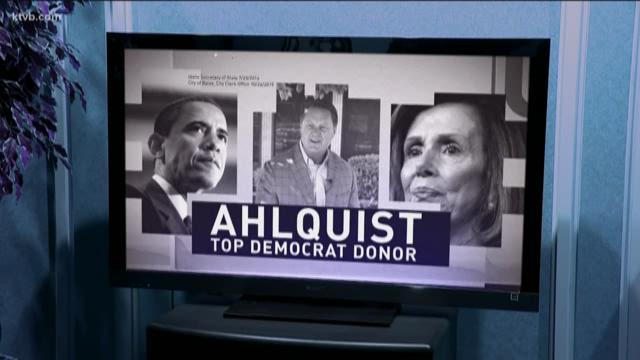 It's the final stretch for the primary races for governor.

With 11 days left for Republican voters to decide on which candidate they want to represent the party for governor, there is a new wave of political ads aimed to sway voters.

The ad, paid for by the Brad Little campaign, focuses on immigration. It starts by saying, "Tommy Ahlquist and Raul Labrador, a liberal record on illegal immigration."

First, calling Labrador a liberal on illegal immigration is a stretch. Labrador has said for years that he wants to fix what he calls a broken immigration system, but not offer amnesty.

In terms of policy, Labrador was a part of drafting and voted for conservative legislation like the Davis-Oliver Act, an anti-DACA amendment, and Kate's Law. Those pieces of legislation aimed to toughen laws against illegal immigrants.

Some conservatives criticize Labrador for arguing against deporting all illegal immigrants. Labrador says that would bankrupt the country and destroy industries that rely on their labor. Instead, he proposed strict guest-worker programs.

Labrador is also in favor of allowing illegal immigrants to apply for U.S. citizenship like all other immigrants, but with no special path to citizenship.

So we can verify that Raul Labrador has shown he is a strong conservative when it comes to illegal immigration.

As a part of his job as an immigration lawyer, Labrador did on occasion defend cases involving illegal immigrants. The ad cites three cases he defended from 1999 to 2003.

Federal court records confirm Labrador defended an illegal alien charged on a firearm charge, a man charged on drug charges, and a man who helped bring undocumented workers to Idaho.

Next, the ad says that Labrador, “supported welfare benefits for illegals."

The ad cites a 2007 Idaho Statesman article that broke down Senate Bill 1157.

That was a 2007 bill in the Idaho Legislature that looked to ban illegal immigrants from getting state-funded benefits.

Labrador voted “no” on the bill because he didn't think the lawmakers who drafted it could clearly address several issues he had with it. He also stated the bill would not “solve immigration policy.”

So we can verify, while Labrador did vote against the bill, saying that he voted for welfare benefits for illegal's is simply not true.

Now on to the claims aimed at Dr. Tommy Ahlquist.

The ad says, "Tommy Ahlquist he is so liberal on immigration that he didn't even vote for Trump over Hillary."

We have verified numerous times Tommy Ahlquist voted for Marco Rubio in the 2016 presidential election. Linking that to his views on immigration is misleading. The claims have nothing to do with each other.

Ahlquist has addressed his stance on illegal immigration a few times during his campaign saying he strongly opposes amnesty and will work closely with the president to help stop illegal immigration, including sending National Guard troops to the border if requested and ensuring no sanctuary cities.

His campaign said in a statement,

"Tommy has seen this problem firsthand serving as an ER doctor near the border and strongly believes that Congress needs to do its job and give President Trump the resources necessary to once and for all secure the border and stop illegal immigration.”

The ad continues, "And when Obama and Pelosi were pushing amnesty, Ahlquist was one of the top Democrat donors in Idaho."

Again, these are two totally unrelated statements. As we have previously reported, Ahlquist did give money to four Idaho Democrats from 2014 to 2016. Those donations totaled $8,000.

When compared to the total amount other donated to Democrats in that time frame that hardly qualifies Ahlquist as a top Democrat donor.

We reached out to the campaigns attacked in the ad, and they responded with official statements.

"Brad Little has gone from running ads that were complete fabrications to running ads that have no basis in reality. It’s shocking that Brad would stoop this low and abandon his principles just to try to win an election. It’s all that’s wrong with politics today. In this governor’s election, voters have a clear choice, more of the same old career politicians or a conservative outsider in Tommy Ahlquist who will shake up the status quo."

“It's shameful and disappointing to see Brad using the same tactics the Democrats used in 2010 to attack Congressman Labrador’s conservative record on immigration. Idaho voters rejected these lies once before and they'll reject them again. I invite the people of Idaho to look at my record. What they'll find is a record of preventing amnesty in Congress and being one of Trump's strongest allies to reform our immigration system.

Brad and his cronies are using a last-minute cheap shot in a failed attempt to hide this simple fact from Idaho voters -- Raul has a consistent record of fighting against illegal immigration and Trump is fully behind his immigration plan to build a wall and reform the immigration system.”