A smartphone app compares breathing the smoke-filled air to smoking cigarettes. We set out to Verify how valid that correlation really is. 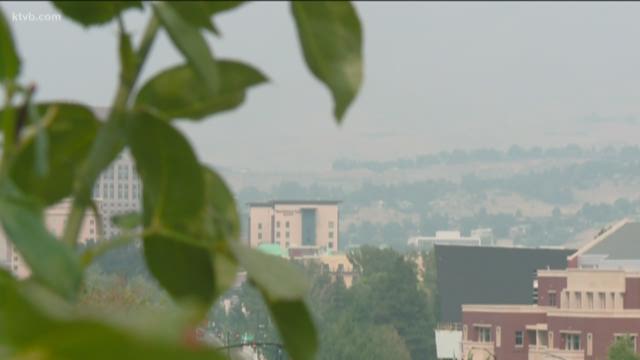 BOISE — The topic on everyone's minds: the nasty air. We've had an orange air quality alert for the last couple days, meaning the air is unhealthy for sensitive groups.

In our search for a way to describe just how unhealthy the air is, we caught wind of a smartphone app. It compares breathing this air in to smoking cigarettes. So our Morgan Boydston wanted to Verify how valid that correlation really is.

It helps to try to put the crummy air quality into context and compare it to something else, which is the purpose of, "Sh*t! I Smoke", the smartphone app that tells you how many cigarettes you smoked that day.

When we pulled it up Wednesday afternoon, the app said we had smoked roughly two cigarettes. The app is drawing this comparison between the health impacts of smoking cigarettes and air pollution using air quality readings from the closest monitoring station.

It's inspired by a Berkeley Earth study that draws an equivalence between the health impacts of air pollution and cigarette smoking. "The rule of thumb is simple," the application's 'About' section says, "one cigarette per day is the rough equivalent of a PM2.5 level of 22 µg/m3". If you're wondering what in the world that means, so were we. In layman's terms PM2.5 is particulate matter that are 2.5 micrometers or less in diameter. The equation factors in the increased chances of inhalation.

Essentially, the study measures the equivalence between cigarettes and tiny particulate matter in the air. These particles can be harmful and work their way deep into our lungs and bloodstream. So we set out to find out if we can really say the air is so bad because of wildfires, it's like smoking cigarettes.

“We’re not supposed to breathe that stuff in. In a way it simulates smoking; they're different particles in cigarette smoke than in wildfire smoke but in terms of the insult to your lungs it's somewhat similar in that you're breathing in small particles that really shouldn't be there,” Saint Alphonsus Emergency Department physician Dr. John Gibson said.

While it's bad for you to breathe wildfire smoke in and it can hurt your lungs, it's not like taking a drag of a cigarette - and doctors say the two are not similar enough to make a direct comparison.

Wildfire smoke is made up of tiny particles from burned wood and trees, along with gases and water vapor. According to the U.S. Forest Service, water vapor makes up the majority of smoke and the rest includes carbon monoxide, carbon dioxide, nitrogen oxide, irritant volatile organic compounds, air toxics and very small particles.

"There is several components of pollution: one is the very small particulate matter which certainly irritates the airways, then you have the ozone on top of that. So I think people kind of get a double impact," Boise Valley Allergy and Asthma Clinic allergist Dr. Michael Kailey said.

But cigarettes are made of a lot of different ingredients: 600, in fact, and when burned they create more than 7,000 chemicals. At least 69 of those chemicals are known to cause cancer and many are poisonous, according to the American Lung Association.

“I think you can compare them and say you're causing some injury to your lung. In terms of quantification of that and this type of air quality equals this many cigarettes, I think that's a difficult comparison to make,” Dr. Gibson said.

"I’m not sure it’s a comparison we can really make because there are many ingredients in cigarette smoke which isn't the same as ingredients from forest fires. And with forest fires, I guess most of the research has to do with immediate effects, especially on asthmatics as well as area irritation. Whereas cigarette smoke, there's been years and years of study of other effects, including cancer,” Dr. Kailey added. "With cigarettes it is much easier to quantify how much a person is getting; with smoke it's really hard to say."

And while we're in the orange, people with underlying issues like heart and lung diseases, as well as children and older people, should avoid being outside. Doctors advise being outside for short periods of time - particularly if you are exerting yourself - regardless of whether you have an underlying condition or not because the longer you are outside, the more you're exposed to harmful particles.

Rather than using the "Sh*t! I Smoke" smartphone app to measure how unhealthy our air is because of wildfires, it's best to go to the real-time air monitoring page on the Idaho Department of Environmental Quality (DEQ) website. There, you can locate the closest monitor to you and find out what the index value is and the levels of pollutants.