Two families went through a weekend of fear and frustration after their puppies that were being flown from Virginia to Boise were mixed up and put on wrong planes. 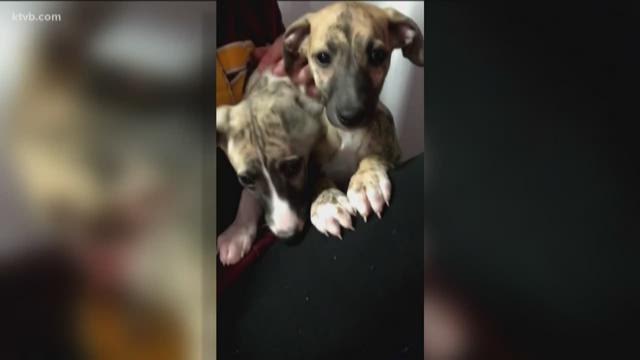 BOISE - It's a topic that has been in the news for the wrong reason in recent weeks, airplane issues with traveling pets. The latest incident hits close to home and involves two local families who were flying their new puppies from the East Coast to Boise.

The puppies' breeder in Virginia put them on a Delta Airlines flight en route to Boise on Saturday. From there, the dogs found themselves criss-crossing the country.

Josh Schlaich says it all started with a phone call on Saturday from a "No-Caller-ID" number. The person on the other end claimed to be a Delta Airlines employee.

"They said 'Hey, just wanted to let you know the dog's flight has been delayed and the dog is going to stay the night here.'," Schlaich said. "They said, 'Here's the number of a person who's going to take care of it, his name is Chris. You need to call them if you want anymore information, thanks, bye.'"

The numbers he was given to contact "Chris" were out of service. Schlaich says he called Delta several times only to get hung up on.

"It's a culmination of uncaring customer service and bad logistics," Schlaich said.

He later found out his puppy was being kept at a boarding site.

"We finally got the information," Schlaich said. "They kind of vaguely said 'Well it will go out on a flight tomorrow, should be there somewhere around one or two tomorrow afternoon', which was today."

When they showed up at the Delta cargo area of the Boise Airport Sunday afternoon, they were given the wrong dog. It was the puppy's litter mate who was on the same flight and was actually going to a friend of Schlaich's who also lives in the area.

"It's very concerning to us as we didn't know where the other dog was," Schlaich said.

The plane was supposed to take the puppies from Virginia to Minneapolis then to Boise. Instead, from Virginia they went to Detroit where they stayed overnight. This is where Schlaich thinks the puppies got separated because one landed in Boise early Sunday afternoon. Schlaich's puppy went from Detroit to either Los Angeles or Las Vegas - he was never told which destination for sure. Then the puppy flew to Salt Lake City before finally landing in Boise late Sunday evening.

"We went for a couple of hours not really knowing where this dog was," Schlaich said. "We didn't really know how it would be taken care of at the boarding facility. The dog has been in a crate for two days and it's an 8-week-old puppy."

Previous reported problems with transporting dogs by airlines - in which the animals were put on wrong planes, or sent to incorrect destinations - didn't sway his decision to get his puppy shipped.

"I figured because of the national attention to this issue that it would've been better rather than worse so I was actually a little less concerned about it," Schlaich said. "We talked about if the dog has major medical issues or doesn't arrive alive, what recourse do we have?"

Thankfully they don't have to think about the worst case scenario anymore. The puppy, who they named Ren, is finally home.

KTVB reached out to Delta Sunday evening. A spokesperson says in part, "We know pets are important members of the family and apologize for the delayed shipment of a dog, which is now in the hands of its owner, after it was routed to the wrong destination. We have fully refunded the shipping costs and have initiated an immediate review procedures to understand what happened."