The event features riders of all ages and abilities, including hundreds of world-class racers. 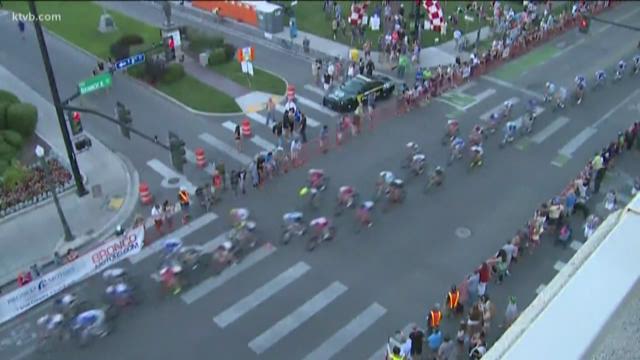 BOISE - Boise's biggest weekend in cycling is just days away.

Idaho's capital city regularly ranks among the top cities in the country for cycling.

Boise's annual crown jewel is the Twilight Criterium - featuring riders of all ages and abilities - all the way up to world-class racers.

On Twilight Criterium race day, which is Saturday, Capitol Park in downtown Boise will be the best place to watch the cyclists speed by on the closed-circuit track.

Race officials anticipate up to 25,000 spectators will be watching.

Boise's Twilight Criterium is unlike a typical cycling competition in which you may see a group of cyclists ride by once. The Criterium brings the athletes to the fans.

“They feel like they are a part of that race because they are so engaged and close to the race,” said Paul Warner with Team Clif Bar.

In this one-kilometer closed-circuit track, 300 cyclists are broken up into teams that race around Capitol Park.

“What makes it so exciting is the course is just about a kilometer long," said Downtown Boise Association spokesperson Lynn Hightower. "These are top amateurs, the best pros in the world and they want to get the cash prizes... and they are giving it their all. So you come out here and not only are you seeing the top athletes, but at their peak performance.”

Because of the tight course and high speeds, crashes are inevitable.

“Always the biggest thing I hear from fans' feedback is they like the crashing," Warner said. "That's always a big thing for fans, they are like ‘whoa those are some crazy crashes!’”

Warner has been racing in criteriums across the country for the past five years and says Boise is a special place to ride.

“There is something about the fans here in Boise that really is so much different than anywhere in the country,” he said.

Thousands of spectators will gather in Capitol Park to watch the race, and get in on the fan expo.

Racing on Saturday starts at 1:45 p.m. and goes until late that night.

But the fun begins Friday with Armstrong hosting the Chrono Kristin Armstrong Time Trial in Star. Like the Twilight Criterium, it is part of the USA Cycling Pro Road Tour Circuit.

Rio Olympics silver medalist Chloe Dygart and U.S. national time trial champ, Amber Neben, will be on hand for the event, which will finish at Firebird Raceway on Highway 16.

There will also be a celebration Friday night at Jack’s Urban Meeting Place (JUMP) in downtown Boise.

“New this year is we have about 100 of the racers from 30 teams, they are going to be over at JUMP Friday night, ready to meet the fans, they will be signing autographs,” Hightower said.

And because its National Fry Day on Friday -- the J.R. Simplot Company will be handing out free French fries at Friday night's festivities.