The Nez Perce Tribe filed a lawsuit against Midas Gold after pollution was left behind. The mining district says it will clean up remains if it's allowed to proceed. 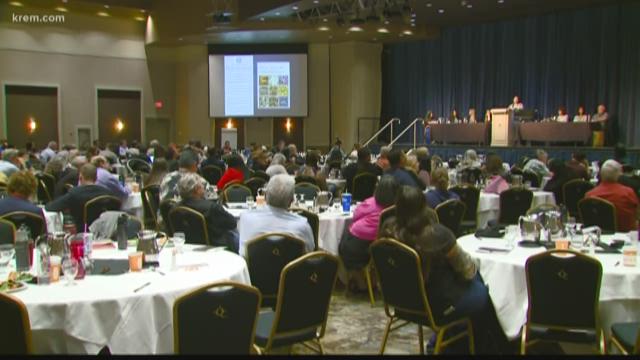 BOISE, Idaho — Editor's note: Above video is a report 41 Native American tribes gathering at a conference on climate change two months ago.

A Canadian-based gold mining company in Idaho asked a judge to put a hold on a lawsuit brought by the Nez Perce Tribe after the company allowed deadly chemical contamination to remain on the tribe's hunting and fishing lands.

The tribe filed a lawsuit back in August to the U.S. District Court against Midas Gold Corp., claiming the British-Columbia based company illegally allowed cyanide, arsenic, and mercury contamination to remain in areas of north-central Idaho, where the tribe hunts and fishes.

An agreement between the federal government and the tribe was made back in 1855. The agreement gives the tribe hunting and fishing rights on the land the mining company wants to work on.

On Wednesday, Midas Gold said in court documents that its plan for the area about 40 miles east of McCall, where the company has never mined in the past, is to clean up pollution from previous mining companies, if it's allowed to proceed, according to the Associated Press.

"We have always wanted to do our part to protect the environment, including cleaning up the mess previous mining operations left behind," the company said in a statement.

"A lawsuit by the Nez Perce Tribe will not clean up the Stibnite Mining District," the company added. "It will only slow down our ongoing efforts to get on this Site and help this area."

Kayeloni Scott, a spokesperson for the tribe, said Friday that tribal officials hadn't yet reviewed the document and couldn't immediately comment.

AP reports that Midas Gold is seeking approval from U.S. agencies to start work, even though the company has existing mining claims in the area from the past decade.

Mining in the area dates back more than a century and has left two open pits, including one that is now filled with water that has been blocking streams since the 1930s. The site also has extensive tailings left from mining operations, causing elevated levels of arsenic.

Midas Gold believes it is economically feasible to reopen the pits.

Today, the Nez Perce Tribe is a federally recognized tribal nation with more than 3,500 citizens who preserve over 700,000 acres of land.