The Gunfighter Skies air show will resume Sunday at Mountain Home AFB, with a tribute to pilot Dan Buchanan. 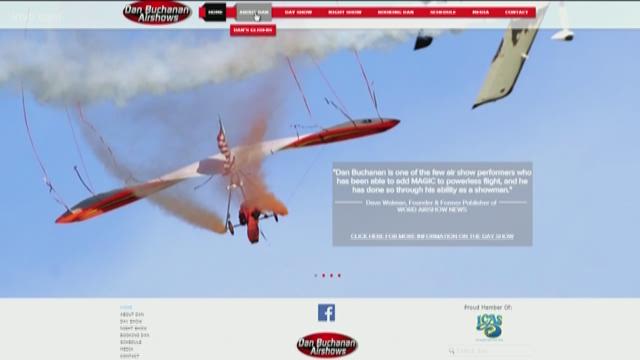 MOUNTAIN HOME - A hang glider pilot has died following an accident during the Gunfighter Skies air show at Mountain Home Air Force Base.

The pilot, Dan Buchanan, was participating in the air show, performing an act he had done countless times before, said Col. Joseph Kunkel, commander of the 366th Fighter Wing.

The National Transportation Safety Board is investigating what led to the accident. A witness told KTVB that a gust of wind had flipped the glider over as Buchanan was coming in for a landing.

Buchanan was flown to a Boise hospital, but died of his injuries.

Buchanan logged more than 3,000 hours of flight time in hang gliders and sail planes, with most of that flight time coming after he suffered a spinal injury in 1981, when landing a hang glider in bad weather, according to the website for Dan Buchanan Airshows. Buchanan completed his private and commercial pilot license as a wheelchair user, and began performing in air shows in 1989.

The remainder of Saturday’s Gunfighter Skies show, including the Thunderbirds performance, has been canceled.

Gunfighter Skies will resume Sunday. Base officials say there will be a tribute to Buchanan and an opportunity to memorialize him at the show.

"Dan Buchanan was no stranger to the air show scene," Col. Kunkel said. "He had performed his act for the last 36 years. He had been with many of the folks, performers, here today. He is a friend. He is a hero. He was doing exactly what he wanted to do today."

Col. Kunkel also said that he is proud of how first responders handled the tragic accident, a scenario that they did train for leading up to Gunfighter Skies.

At least one brush fire, unrelated to the glider crash, was spotted on the base after a Saturday morning performance in which pyrotechnics were being used. The fire is surrounded by tarmac.

The air show will continue tomorrow in honor of our dear friend Dan Buchanan, and all the support he has provided for our air shows. There will be a tribute to Dan and an opportunity to memorialize him at the show.— 366th Fighter Wing (@366FW) June 2, 2018