Titus Ponder, 10, was an amazing cancer warrior who touched so many lives. Now his parents are inviting the entire community to his memorial service this weekend. 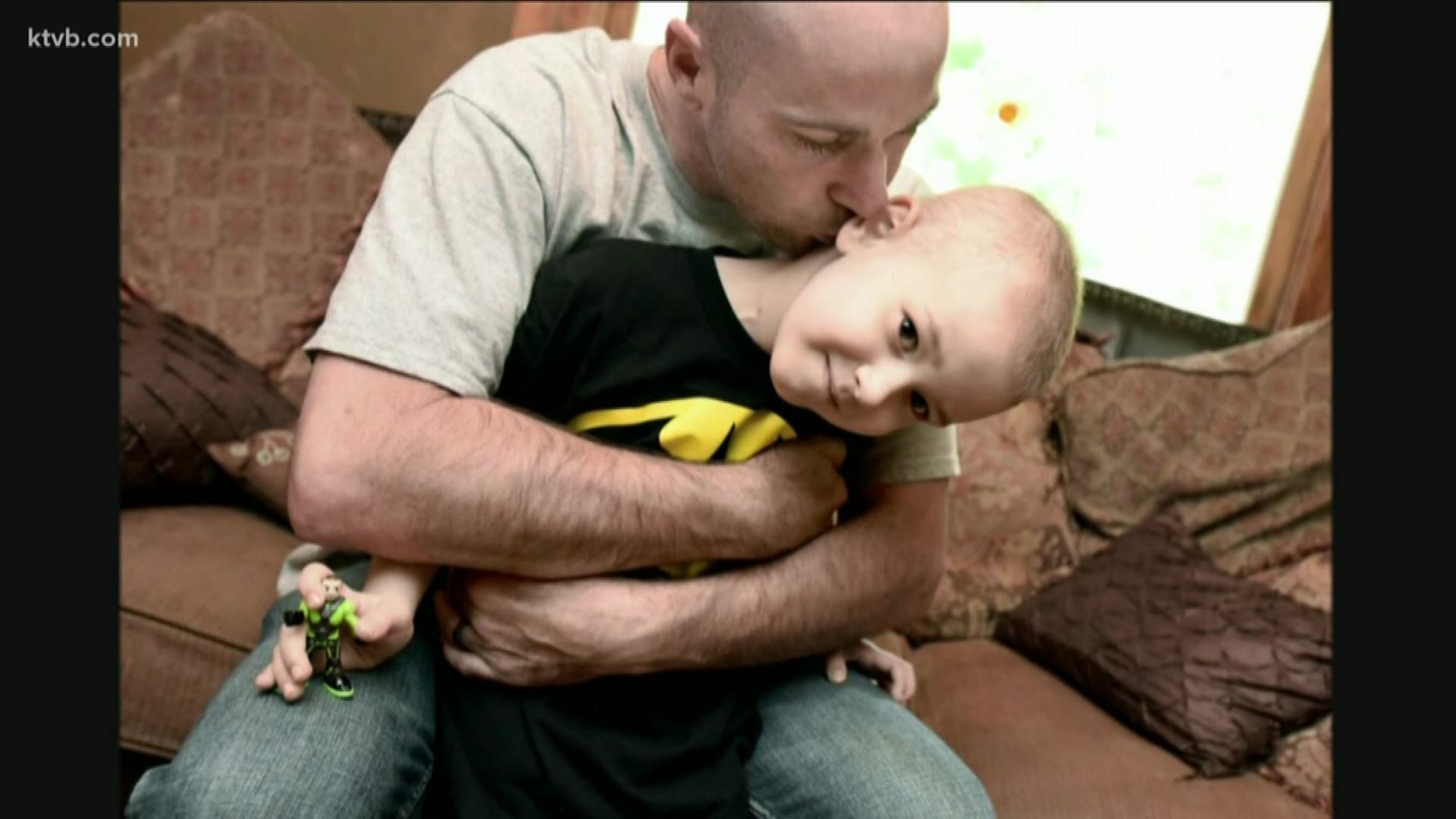 The celebration of life and memorial service for Titus is this Saturday, December 28, and his heartbroken parents are inviting the whole community to honor and remember him.

Titus spent the first five years of his life as an adventurous little boy. He loved to dig in the dirt, play outside, he loved to travel, and absolutely loved to try new foods. His parents Dustin and Amber tell us he was an amazing little boy with so much ahead of him, and a heart to take him wherever he wanted to go. He was wise beyond the 10 short years he lived on this earth.

Credit: The Ponder Family
A young Titus Ponder in the arms of his dad during his first cancer battle. Titus was first diagnosed with Acute Lymphoblastic Leukemia at the age of five. He relapsed five years later, at the age of ten.

Titus was first diagnosed with acute lymphoblastic leukemia at the age of 5. His mom and dad say he fought hard, strong, and proud. They celebrated with so much joy when he went into remission and finished treatment in 2018. They were so hopeful for a healthy future for their son.

Titus had big plans for his future. His parents say he wanted to start a business helping families who were going through cancer treatment. He wanted to clean their houses, run errands, and complete their chores while they were in treatment. He was also a foodie; he loved cooking so much he also had a plan to start a food cart called "Ponder's Paninis." He wanted to raise money and hire his friends to work with him.

Another one of Titus' passions was painting. During a charity event for the Leukemia and Lymphoma Society, he sold one of his paintings to raise money. He had so many passions in his life, he felt the opportunities in this world were endless.

He loved going to Boise State football games with his family, and he he dreamed of traveling to Bora Bora to swim in the crystal blue water, feel the white sand between his toes, and go shell collecting. In March of 2019, that dream came true. He went to Bora Bora with his mom and dad to celebrate his life, and all that he had accomplished through his fight against cancer.

Credit: The Ponder Family
It was a dream come true when Titus Ponder traveled to Bora Bora with his mom and dad in March of 2019. They celebrated his life, and winning his battle with leukemia. Sadly, Ponder relapsed in November, and passed away in December.

Sadly, on November 20 Titus relapsed and the leukemia returned. He was ready to start the fight again, but on December 7, Titus was admitted to St. Luke's MSTI due to a secondary infection called neutropenic enterocolitis, an acute life-threatening condition with a high mortality rate.

Once again, Titus amazed his family with his bravery and went into surgery to fight the infection. Titus fought as hard as he could, but he passed away on December 14 from complications related to the infection. His heartbroken parents say he was a warrior until the very end, and they are so proud of their son.

Credit: The Ponder Family
Amber Ponder, Titus' mom, cuddles with her son at St. Luke's Hospital in Boise after his relapse of leukemia. Titus battled a complication, a powerful infection, that ultimately took his life.

Titus's family would like to thank everyone who helped in his fight, especially the Make-A-Wish Foundation, Camp Rainbow Gold, the Caldwell Fire Department Stair Climb Team for the Leukemia and Lymphoma Society, all those who contributed to his GoFundMe, and his amazing doctors, nurses and staff, as well as his loving friends and family.

Services for Titus will be held this Saturday, December 28 from 1 to 4 p.m. at Nampa First Church of the Nazarene. There will be a celebration of life at 1 p.m., and formal services will begin at 3 p.m.

The family would like to invite all friends, family, and anyone who has been touched by Titus' story. Everyone is welcome to honor and remember this special boy.

RELATED: 6-year-old with terminal disorder asks for cards from around the world for Christmas

RELATED: Jessie’s Journey: Boise mom shares the raw and painful reality of raising a child who is battling cancer