Thousands participate in Boise 'March For Our Lives'

Local students helped organize the rally and march, one of more than 800 held across the U.S. 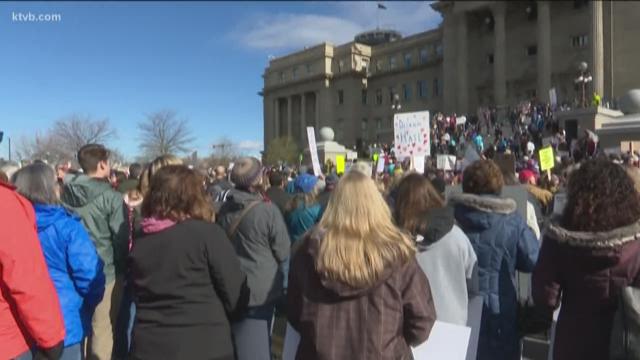 Thousands of people participated in the March For Our Lives demonstration in Boise Saturday morning.

It was part of nationwide movement calling for stricter gun laws in the wake of the shooting in which Nikolas Cruz is accused of killing 17 people on February 14 at Marjory Stoneman Douglas High School in Parkland, Florida.

Slideshow: March For Our Lives in Boise

Slideshow: March For Our Lives in Boise

The event began on the steps of the Idaho State Capitol. There was music and speeches given by local students.

A teacher who was attending Seattle Pacific University when a shooting occurred on that campus in 2014 also spoke.

"Nine Days before I graduated from Seattle Pacific University a man came to my school and shot three students killing one of them,” she said to the crowd. "How could I be a teacher when I couldn't guarantee the safety of my students? How could I go to work every day not being terrified that could I be in another school shooting?"

People of all ages and from all over Idaho attended the march and rally.

"It's really scary because I feel like shouldn't be able to go to school and not feel safe,” a student said. “It's just scary, and I sometimes wonder what if it happens in Boise?"

Of the dozens of mass shootings that have made national headlines in the past 20 years, none have occurred in Idaho.

Idaho Gov. C.L. "Butch" Otter has signed a bill cracking down on threats directed against schools, school activity venues, school buses, staff, or students -- whether those threats were made on- or off-campus.

The Idaho Legislature has also approved a bill authorizing and encouraging Idaho school districts to adopt and offer elective courses in firearms safety. Just six members voted against the bill in the House, and it received unanimous approval in the Senate. According to the official website for Gov. Otter, the governor had not signed it as of Saturday.

Other than what federal law requires, Idaho has almost no restrictions on gun ownership by adults, and does not require a permit or license for concealed carry. When he signed a law authorizing permitless carry in 2016, Gov. C.L. "Butch" Otter encouraged anyone thinking about carrying a gun to take advantage of opportunities for gun safety training, which are available through many private businesses and organizations around the state.