On Tuesday, Boise Working Together filed more than 7,000 voter signatures on the proposed Boise stadium and library projects to try and take them to a public vote. 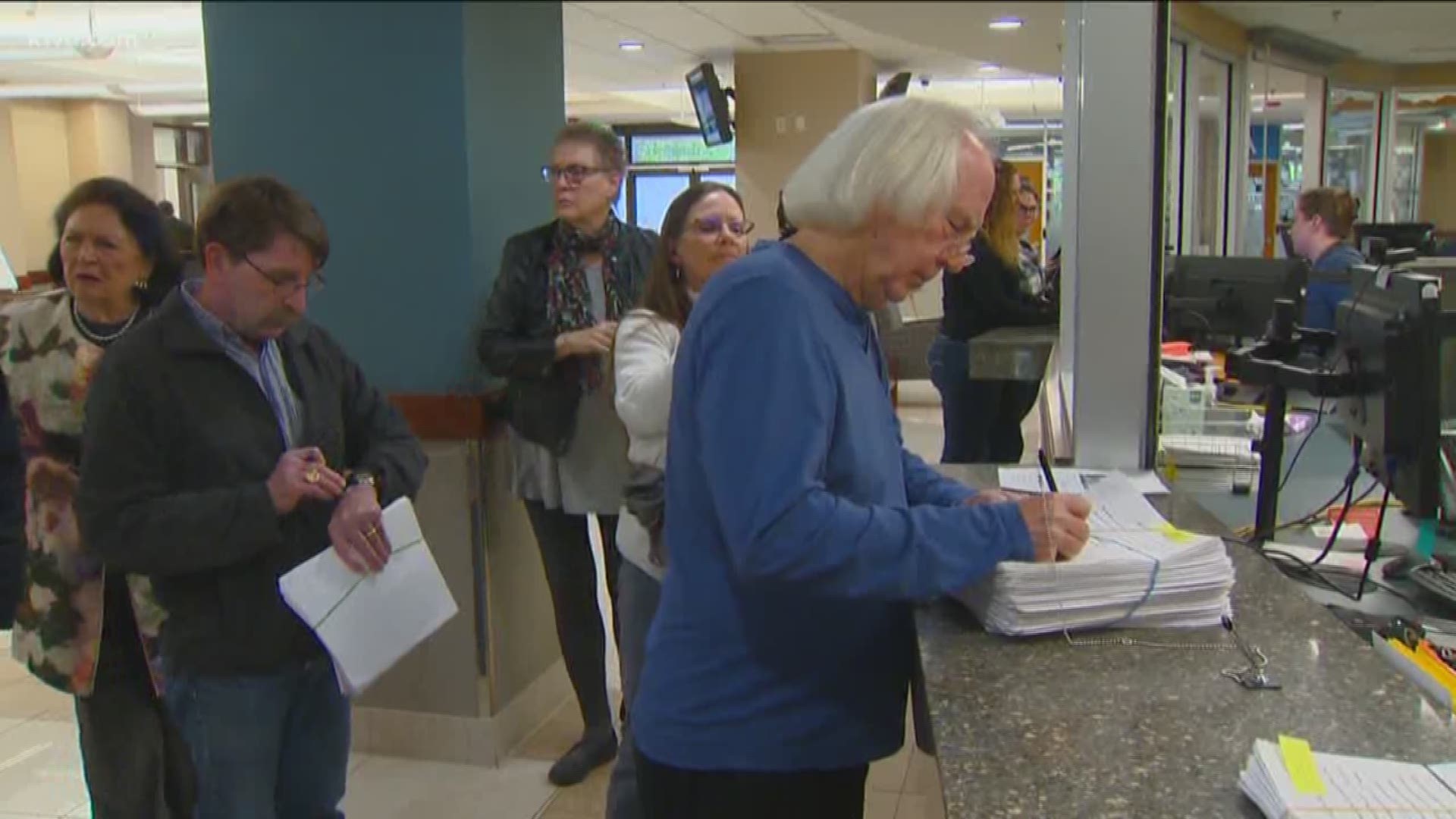 Each of those two projects got more than 7,000 signatures, which were collected by "Boise Working Together" - a grassroots citizens' group who wants to make sure Boise residents have a say in the projects.

The goal of the group was to get enough signatures to put the projects to a public vote on November ballots.

Tuesday was the third filing of signatures the group submitted. In total, the stadium had 7,152 signatures, while the library had a total of 7,315, a group spokesman told KTVB.

All signatures filed with the city clerk will go to the Ada County clerk to be verified. To qualify for ballot status, the projects each need 4,962 valid signatures, which is 20 percent of voter turnout from the 2017 Boise City Council election.

The clerk's office has 60 days to check those signatures.

Those who are part of Boise Working Together said they worked hard to get all those signatures, and that they are legitimate residents who want to be involved.

“I want to stress that these are not just signatures, these are real people – people we have met, talked to, we’ve visited their neighborhoods,” said David Klinger, spokesman for Boise Working Together. "They want greater engagement and consideration in the growth and development of Boise. So our petition drive today gets them that voice.”

Klinger added that while canvassing for signatures, members of the group were surprised to learn how many people in Boise didn't know anything about the projects - or knew only minor details.

“We feel good about this experience, we feel we’ve done the city a favor by this initiative," he said. "We’re out talking to people who have never been talked to before about projects that are going to shape their life in this city.”

Klinger said that's the point of them collecting signatures - it's about the process itself, not the projects.

“It’s not necessarily the projects – it’s the way they’re done and the way the citizens are engaged," Klinger explained. "We feel that’s been deficient. It’s not about whether you’re for or against a library, for or against a ballpark, we are for the citizens having a greater voice in the direction of this city – a more meaningful voice than they’ve had up to now.”

Diane Ronayne, another member of Boise Working Together, said she feels the public deserves to be informed about big, transforming projects like the stadium or library.

"When these two projects came up, they just kind of coalesced and there’s this feeling that we’ve had that the city needs to be talking to the people a little bit more before they make these decisions,” she said.

Adelia Simplot, president of Boise Working Together, said it's about letting the people have input on their own city.

"We should be allowed to vote when we are asked to shoulder a great responsibility, which these two projects have become,” Simplot said. “We want to say to the voters of Boise, ‘You’re welcome.’ We did the work for you and now you can have a voice in the fall at the elections and say what you want to say. And that was all we ever wanted."

"We are optimistic that both projects will become reality, no matter the ultimate determination by the county clerk on the petitions.

They understand that these projects will create gathering places for everyone, designed to be enjoyed by all no matter their background -- welcoming spaces for all Boiseans. They understand the importance of creating such spaces as a way of strengthening our community, enriching our lives and offering shared experiences. They are excited about our vision for a forward-looking Boise that’s optimistic about its future.

Whatever the outcome of this process, these projects represent the kind of city we want to leave behind for future generations. To me, the choice is clear – we must chart a course with vision. The alternative is simply not worthy of this fine city and its residents."

Kevin Booe, current director of the Boise Library, also believes the library will become a reality and that the city will find a way to get it built, despite new law going into effect in July of this year. During the 2019 session, the Idaho State Legislature passed a bill that would require cities to hold a public vote when municipal building projects would use more than 50 percent of public money, including state and local funds as well as urban renewal dollars.

Gov. Brad Little signed that into law in early April.

The new library's proposed parking garage would use urban renewal dollars, but in the recent legislation, parking garages are exempt from that rule. As for the rest of the library falling under those rules, Booe and Bieter don't believe that will stop plans for the library - and it can still be built.

“Absolutely it will be possible," Booe said. "That was only one funding mechanism so there are several things we can do. So our financial team, as well as our project team, are looking at other ways that we can finance this project. And we’ll continue to do that."

What those other funding solutions might be have not been determined yet. Booe said that's something both the library and the city are currently working on.

When asked if he thought the library potentially going to a public vote would hurt the project, Booe said he didn't think it would because he feels the community understands the need for a new library. Based on public feedback, they're pushing for a new library and he hopes the public will continue to support it.

"I’m confident that most of the public wants this building built," he said. "I’m optimistic it will be and I know that we have strong and solid support from the community to build a new library.”

Booe added that the library has been doing its philanthropic fundraising for the new library and right now, they have raised $12 million in committed funds.

He said right now, they are about 20 percent done with schematic design and would hope to have detailed plans of what the inside would look like to show the public in August.