Most vigil attendees left peacefully, but the downtown Boise situation became tense later in the night after police had to separate counter-protesters. 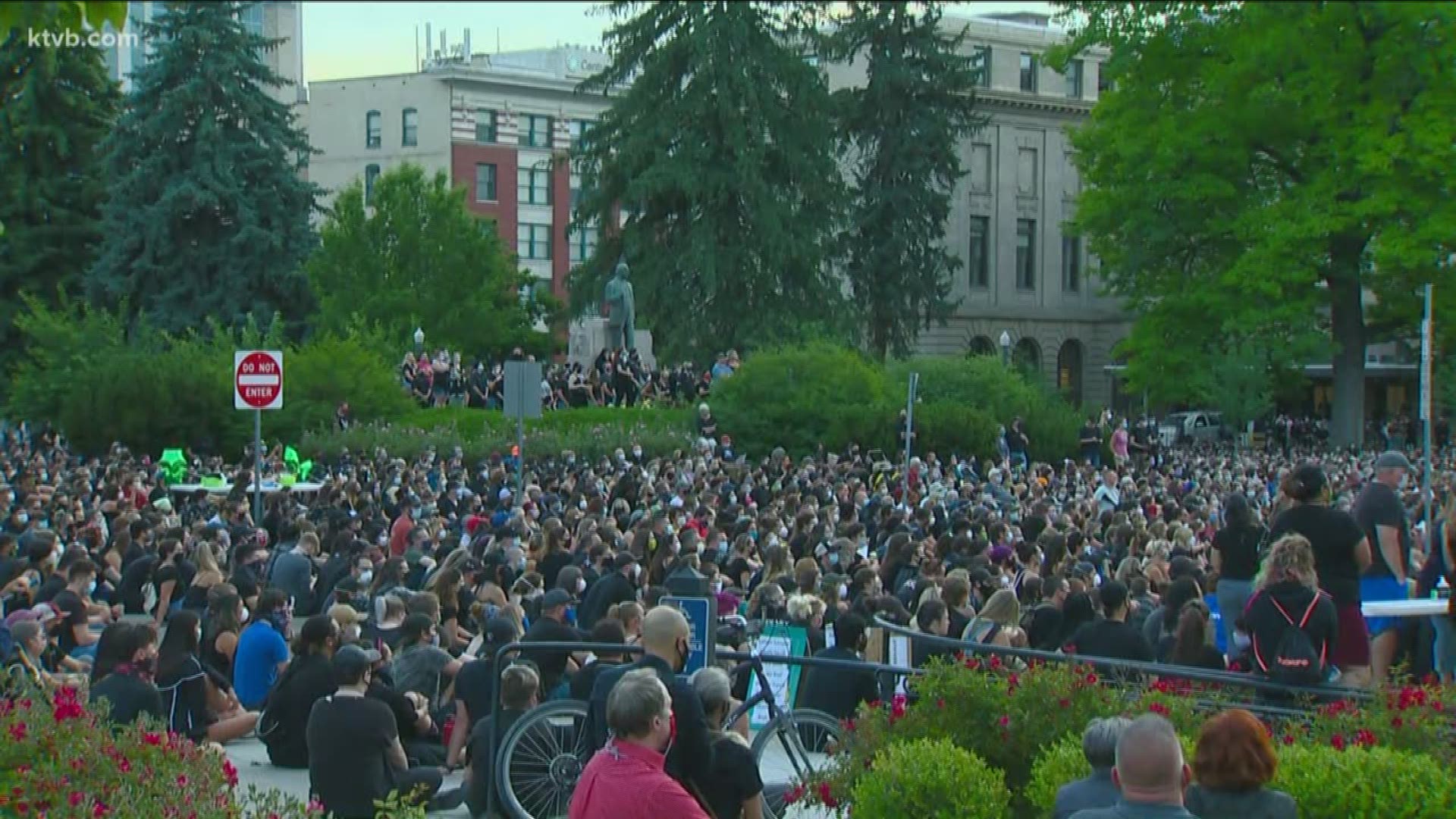 BOISE, Idaho — Thousands gathered at the Idaho State Capitol Building Tuesday evening as part of a vigil in memory of George Floyd, who died in Minneapolis last week while in police custody. The Boise vigil itself was peaceful, with thousands packed in front of the Capitol, many wearing black shirts and masks. (Scroll down to see a slideshow of the vigil crowd.)

Most vigil attendees left shortly after it ended, but the downtown atmosphere of the night changed as a few people remained to protest and march, chanting loudly. (Scroll down to see tweets from protests after the vigil.)

At one point, there was a tense exchange between the remaining Black Lives Matter supporters and a group of people waving Blue Lives Matter flags. Boise Police and Idaho State Police separated the two groups. No violence broke out between the groups but Boise police did suit up in their riot gear and kept them apart.

The vigil comes off the heels of Floyd's death but also honored all black lives lost due to police brutality or at the hands of fellow citizens.

KTVB had three reporters at the vigil - Joe Parris, Gretchen Parsons, and Misty Inglet. All three said the vigil has been peaceful. Parris stayed at the vigil well into the night and followed the remaining attendees of the vigil march up and down downtown Boise until they returned to the statehouse, where they eventually encountered counter-protesters.

A few tense moments, but the groups are separated again. pic.twitter.com/LqaluGNgjR

Vigil organizers told Joe Parris that they believe anywhere between 3,000 to 5,000 people attended the vigil.

Misty Inglet spoke with several Boise police officers after the vigil and all said things were peaceful from their perspective and that they had no problems.

The vigil follows Monday's protest, which was also peaceful. However, an 18-year-old man was arrested after he accidentally fired a gun at the protest. Michael Wallace of Garden City was booked into the Ada County Jail on a misdemeanor charge of discharge of a firearm in city limits and since been released on bail.

See more tweets from the protests after the vigil here (story continues below):

Mayor Lauren McLean and Acting Chief Ron Winegar held a press conference on Tuesday afternoon where they urged for a calm and peaceful vigil.

"I want to acknowledge that these are really hard times for our community and our country. We are all hurting, especially members of our black community," Mayor McLean said. "The unjust and inhumane death of George Floyd brings pain and suffering not just to his family, but to countless members of our own city and nation whose lives and lived experience includes the byproduct and impact of centuries of racism and oppression."

Both the Boise Police Department and Idaho State Police were at the vigil to monitor the gathering.

1 / 8
Misty Inglet/KTVB
Over 1,000 people, possibly thousands, of people attended the vigil for George Floyd in downtown Boise on Tuesday night.

The vigil was not put on by any specific group but rather by a few local community members.

"I'm really looking for a unity in our community and a way for all people of all colors to come together and mourn together," said Whitney Mestelle, one of the organizers of the vigil, "and leave together wanting to join and bridge some gaps.

"We hope that our white allies leave with a greater sense of duty to their brown brothers and sisters and we hope that people of color like myself feel heard, feel listened to," she added.

The event had a few black speakers who shared their personal tragedies with racism.

While holding candles, they read off several names of black Americans who have been unjustly killed – the audience repeated those names, and then a brief moment of silence was held for each one.

"Our goal for doing this is to create a peaceful vigil – not a riot, not a protest, not a rally," Mestelle said.

Wow...I have never seen a crowd this big in Boise. Speakers stress “this is a vigil, this is NOT a protest, this is NOT a rally” appears to be well organized and very peaceful @KTVB pic.twitter.com/ySeQIHbYyC