Dan and Farris Wilks put up sets of gates on a road through their property just miles from Bogus Basin in the Boise National Forest. Whether you legally have access through there is up in the air right now. 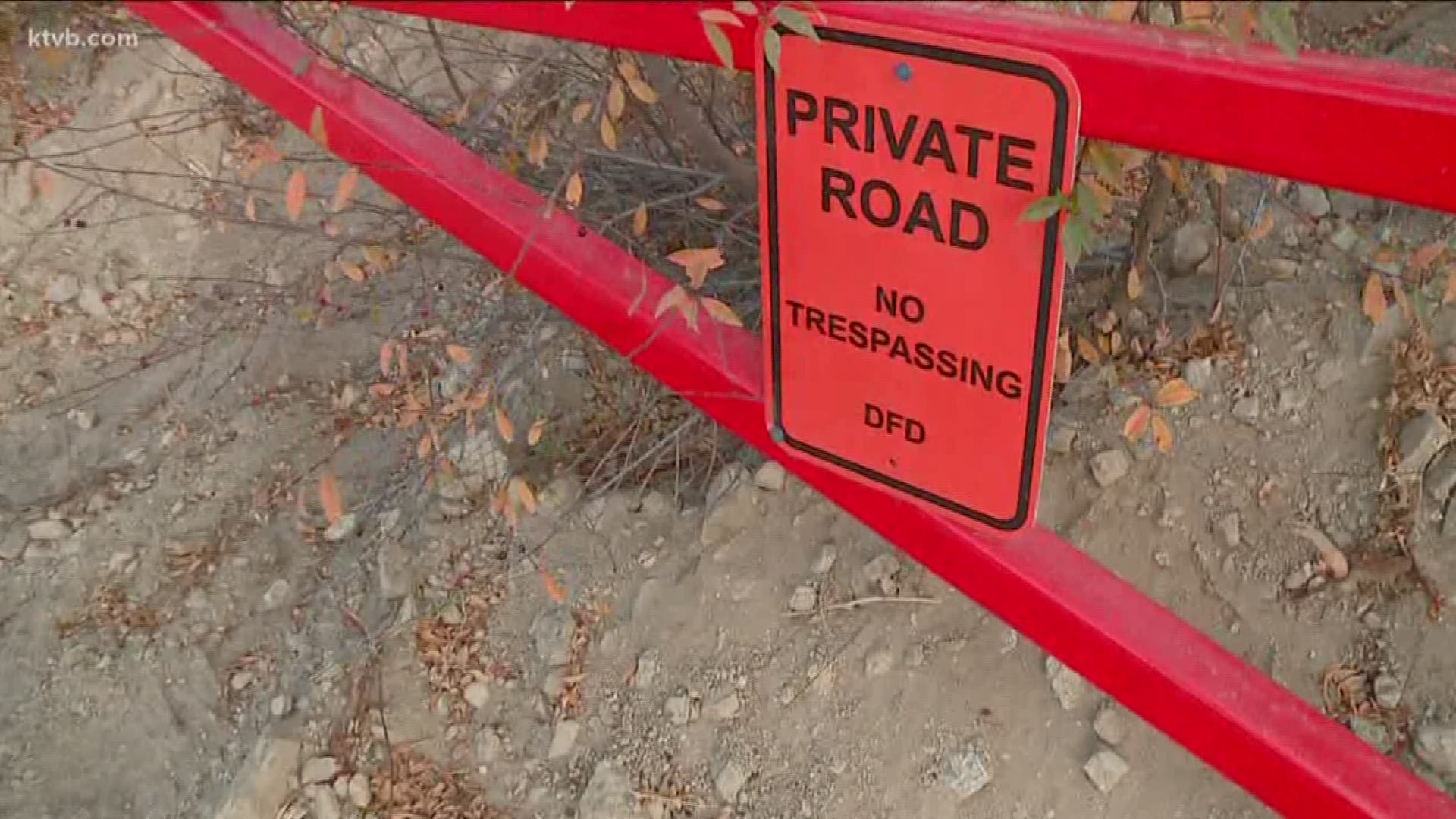 BOISE — Here in Idaho we love our lands. We also love our privacy. But what happens when those two interests are at odds?

Sweeping alpine forests, mountain ranges, wildlife, and access to endless recreation are all precious gems Idahoans treasure. Billionaire brothers Dan and Farris Wilks from Cisco, Texas, clearly treasure that too, as they are buying up massive amounts of private land across the state in Adams, Boise, Idaho and Valley counties.

But recently they put up sets of gates on a popular Forest Service road through their property just miles from Bogus Basin in the Boise National Forest. The gates are open, however the no trespassing signs may indicate otherwise.

Many Idahoans are up in arms. But whether you legally have access through there is up in the air right now.

Last year, we reported on very similar tension between the Wilks’ company, DF Development LLC, and outdoor enthusiasts in Valley County over access to a road amid the swath of private property.

Boise Ridge Road, National Forest System (NFS) road 374, is well known to locals in the Treasure Valley. But what many may not know is that as of recently, they will come across sets of gates and ‘No Trespassing’ signs at different points in the road.

“This is a lot bigger than just those gates on that specific road,” Idaho Wildlife Federation Executive Director Brian Brooks said, “I think it's no secret Idaho is for sale and we've got better property values than anywhere else. And we all live in this state because it's beautiful. And people are coming here.”

That includes the uber-wealthy Wilks brothers, who are buying up hundreds of thousands of acres of private land across the region, maintaining it well but selling chunks for millions of dollars. They are selling the land under Wilks Ranch Brokers; their company DF Development LLC is listed as the owner of the lands in Idaho.

KTVB reached out to a local representative and lobbyist for the Wilks, but they declined to comment on the matter.

You may be wondering: Who are they? Farris and Dan Wilks started out as masons – following in their father’s footsteps – and then jumped into the energy industry. They founded a hydraulic fracking and oil field services firm called Frac Tech, which they later sold to investors in Singapore and became billionaires.

“These people don't have an investment in our community. And they're far more willing to shut off access because don't have sense of place here,” Brooks told KTVB.

Brooks says the Wilks have every right to block access to their private property, although under previous owners such as Boise Cascade and Potlatch Corporation their property was once fully open and accessible to the public.

In a 2017 McCall Star-News article, the brothers said they found “many areas” on their 172,000 acres of private land in Valley County were damaged by users. The Star-News article quotes a statement from the Wilks saying, “We were very surprised to see that not all visitors have treated this land with the same respect that we would.” The Wilks restricted access and told the newspaper that in order to ensure the land is protected and respected, access would be invitation only and “evaluated on a case-by-case basis”.

Brooks is referring to the ‘No Trespassing’ signs and gates DF Development put up in the Boise National Forest. Members of his organization contacted him about the gate being installed on the road. When he went to check it out for himself, Brooks says he encountered armed security guards with DF Development changing padlocks on the gate.

“You don’t install a gate to make it look pretty. They're installing that thing to close it. They told me as much, the guards told me they were closing it this week right before hunting season,” Brooks said.

“When it comes to shutting off a road through their land that provides you access to your lands - to public lands - that's where you cross the line. That's why people are very angry,” Brooks added.

NFS 374 is popular to people on ATVs, motorcyclists, mountain bikers, and hunters.

“It has been maintained with tax dollars over the years for decades and has been used by the public for decades,” Brooks said.

Much of the land around the road has been private for years; it was previously owned by timber companies, who sold to the Wilks, while other surrounding land is owned by locally-based Hoff companies Inc.

The Wilks Ranch Brokers website shows 11,240 acres around the road are for sale: the property is listed as Boise Ridge Mountain Ranch and is going for $10,296,000. The listing describes the property as “prime timber private ranch” that “boasts an abundance of wildlife”.

Boise National Forest public information officer Venetia Gempler told KTVB the Forest Service is researching their access on Boise Ridge Road now that issues have been brought to their attention. They say they are digging through historical records and reaching out to DF Development to come to some type of an agreement.

But Brooks feels this issue can really only be solved with legislation or legal action.

“There is so much ambiguity around this road,” he said. “If we want to stop them we need to settle this issue in court, unfortunately.”

Our KTVB crew ran into people checking out DF Development property for sale while we were filming this story. They didn’t want to go on camera or have their names released, but said the property is private and the Wilks have a right to do what they want.

They feel if the government wants to keep the road open, “they should buy it”. They believe because it runs through private property, it is the private property owners’ road, and though it was open before under previous owners, there is no legal obligation for the new owners to keep it that way.

As we learn about whether you can still access the road, we will update you.