Barbara McQueen says she is honoring her husband's lifelong dream of owning a second-hand store. 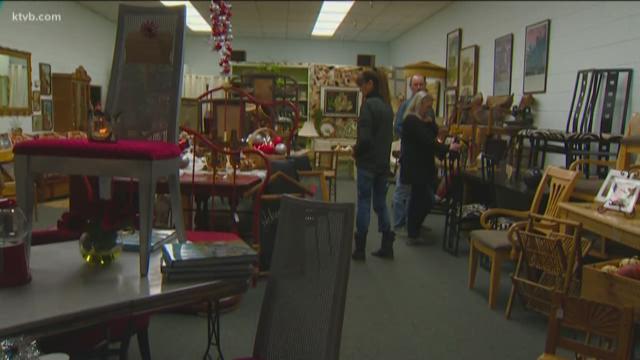 The widow of Hollywood film legend Steve McQueen has opened a new pop-up shop in Boise, featuring everything from antique furniture to photos of McQueen and paintings he collected over the years.

As Barbara McQueen looks at the photos, she says memories come flooding back.

"It's so long ago but I can remember everything," Barbara said. "I mean, it just seems like it was yesterday and I know what was going on and what we were talking about."

It's been 37 years since "The King of Cool" passed away and his belongings have traveled with Barbara from home to home over the last three decades.

"Right now it's mostly furniture," she said. "I've got my private pictures that nobody will ever see and that's kind of close to my heart."

Over the years, she says she's had to let some of his things go.

"There's a lot that I wish I would've kept," she said.

The two were married for less than a year, but were together for a few years prior.

"I thought he was just fun and he was nice, and his favorite thing was this kind of a shop," Barbara said.

Now, she's honoring Steve's lifelong dream to own a second-hand store with this pop-up shop called Curiosities. It's filled with things like his favorite lamp and paintings he collected.

It's a new look into the life of a Hollywood film legend.

"They can really see a different side of him," Barbara said. "The weird things he's collected and the pictures where he doesn't look like Steve McQueen the famous movie star. He looks just like a guy reading the paper with a cup of coffee."

Barbara is also hoping to support local businesses by highlighting local artists, and some of their pieces are up for sale as well.

You can also buy her second book, "Steve McQueen The Last Mile... revisited" which is full of pictures that Barbara took over the years.

The shop won't be around for long. The grand opening is Tuesday December 5 from 4 to 8 p.m. The December hours are Wednesday through Friday from 11 a.m. to 6 p.m. and Saturday and Sunday from 12 p.m. to 3 p.m. or by appointment. The shop is located at 4610 State Street in Boise.