The State of Idaho now officially owns the Hewlett-Packard campus in Boise. As they work on infrastructure and renovation improvements, they're fighting an asbestos issue. 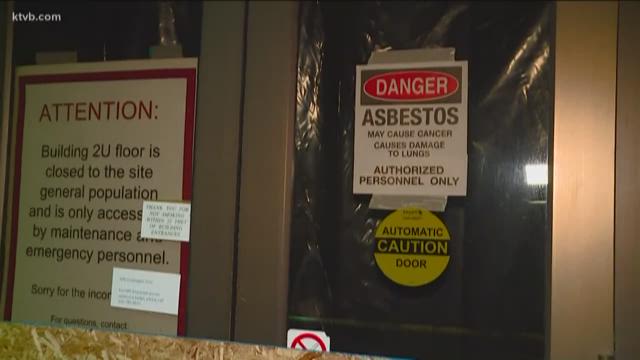 BOISE -- A lot of you have driven past the Hewlett-Packard campus over the years but never actually stepped foot on it.

Well as of December, it's officially in the hands of the state and people of Idaho and is now being referred to by state officials as the "Chinden campus".

In preparation of move-in, the state is renovating the first building they'll take over. But there's an asbestos problem they're working to tackle first.

Signs were posted inside and outside the area of the building where crews are pulling up carpet and flooring, advising people to beware of asbestos and keep out. Parts of the building where work is under way have been vacant for years, and the state says they're making sure everyone who works here isn't affected by abatement.

The property is 1.5 million square feet, spanning eight buildings and about 200 acres.

"The size of the campus might be intimidating right now but this is a long-term move for the state," Department of Administration Deputy Director and Chief Financial Officer Keith Reynolds said.

"We knew with the age of these buildings and, of course, we looked at them first. We did due diligence throughout the period after the purchase was authorized by the Legislature, we knew up front that we had to do renovations," Reynolds said. "It was factored in to what the costs were of the site and it is the best value for the taxpayers."

The Idaho State Tax Commission will call HP's campus home in the fall because their lease expires first, followed by the Industrial Commission. Then over time, other agencies will be consolidated that have spent decades and millions of dollars leasing buildings around the Valley.

"It lowers the cost for the taxpayers, it puts us in control of the spaces our state agencies are in so we don't get into these situations like we have the tax commission where we're in a scramble to find a spot for them," Reynolds said.

First up: they're gutting Building Two, where the tax commission will take over. And they're doing asbestos abatement.

"It's in the tile and we are in the very first process of that mitigation," Reynolds added. "The asbestos is safe as long as it isn't in the air, it's an airborne issue. While it's in the tile, carpet, in the glue, it's not a problem. It's when we have to take those things up and replace them that's where you end up in these mitigation issues."

Removal of the asbestos will take about two months, Reynolds says.

The building has been around for decades and when it was built, asbestos was a common ingredient in construction material.

"We of course suspected because of the age of the building there would be asbestos. HP provided reports during our due diligence phase that confirmed that," Reynolds added.

After the state closed on the deal in December, Reynolds says experts started testing and eventually found contaminants. As we all know, asbestos can be toxic and hazardous. So as crews take up flooring embedded with asbestos, state officials say they're taking every precaution.

"It is not affecting anybody at HP," Reynolds told KTVB. "It is not delaying anything in our schedule. It was anticipated and needed to be done."

The State Department of Administration says they didn't necessarily have to do asbestos abatement, but it is considered best practice.

"If you leave that asbestos-filled tile and then carpet over the top, every time you need to do any kind of work in the building - if you need to drill a hole for electrical, plumbing - you have an asbestos event," Reynolds said. "So this is the best way to take care of a space that you plan on occupying long term."

State officials tell KTVB they budgeted for this removal and it'll cost about $1 million.

HP Inc. will lease most of the buildings on the campus from the state for a seven-year term, followed by the option of two five-year renewable contracts.