The beginning of the special session saw protesters clash with troopers and shatter a glass door, as well as one lawmaker walk out over social distancing concerns. 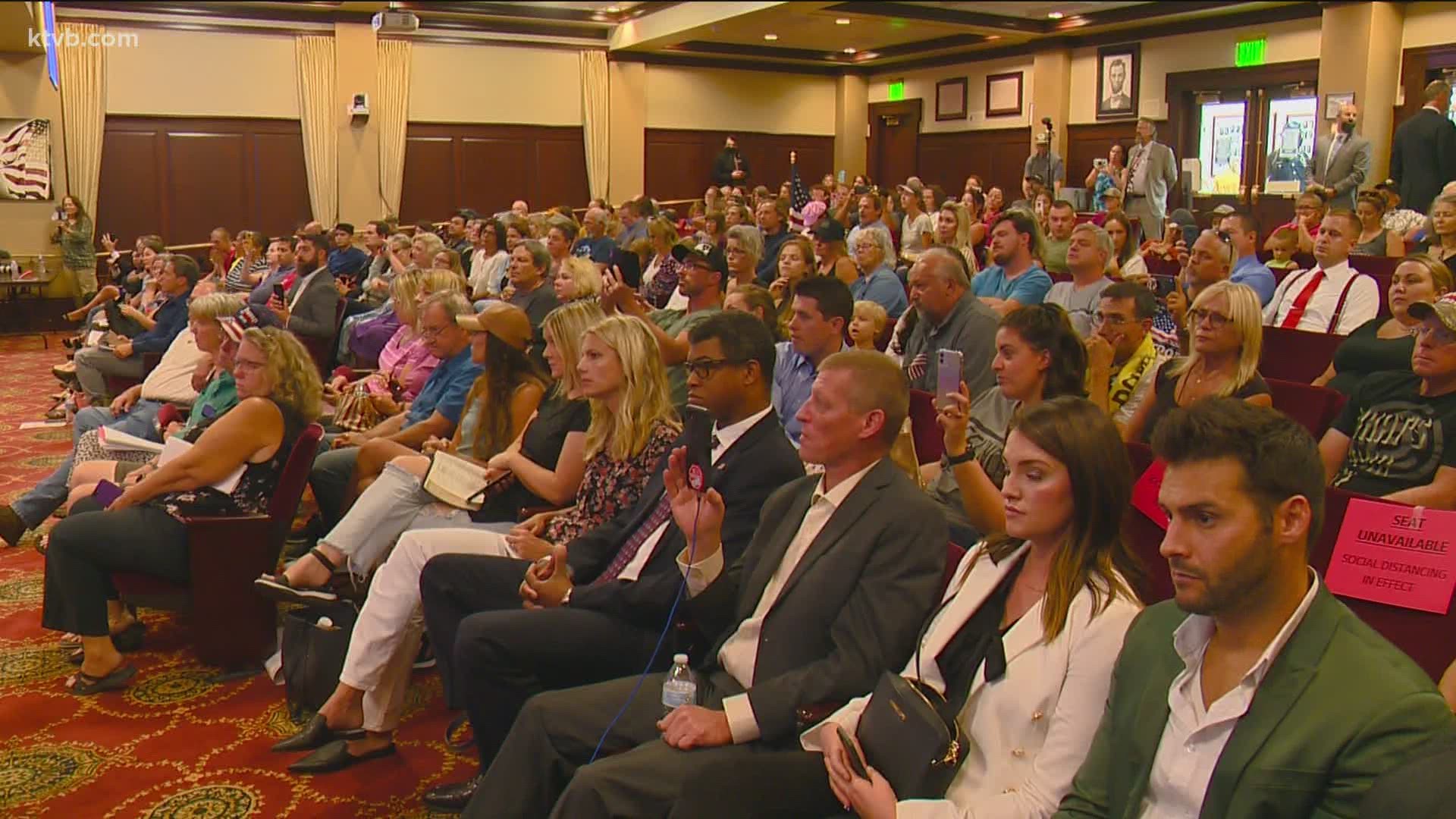 BOISE, Idaho — Idaho lawmakers on Monday voted to introduce a handful of bills aimed at limiting the liability of schools and other institutions from the coronavirus pandemic, as well as handling absentee and in-person voting during the upcoming presidential election.

The votes to advance the proposed pieces of legislation came after a chaotic morning that saw a throng of protesters clashing with Idaho State Police inside the Capitol Building.

Hundreds of people gathered outside the House gallery, shouting "let us in, let us in." The protesters shattered a glass door and shoved ISP troopers as they attempted to force their way into the room.

At one point, according to a Facebook Live shared with KTVB by the person who recorded it, Speaker of the House Scott Bedke came out into the crowd, telling them that he would let people inside, but that they needed to maintain decorum.

The group appeared to be organized by Ammon Bundy, who has led previous protests about the state's response to the coronavirus pandemic, including a recent clash at the Southwest District Health building during which protestors forced their way into the building and shoved a district employee.

Rep. Ilana Rubel, D-Boise, wrote in a Facebook post that the protesters had been allowed into an area that was supposed to be reserved for lawmakers who were trying to maintain six feet of distance from other people.

"They broke the glass out of the gallery door. The gallery was supposed to have a cordoned off area for socially distanced legislators to sit," she wrote. "Now jam packed with protestors and not a mask in sight."

Jefferson Street in front of the Statehouse was blocked off, with police wearing riot gear assembled outside.

Protesters without masks gather inside the Idaho Capitol

After the special session was called to order, legislators dispersed to committee rooms to take up a series of proposed bills.

The crowded conditions inside the hearing rooms prompted one lawmaker, Boise Democrat Melissa Wintrow, to announce to the other members of the House Judiciary and Rules committee that she would not participate.

"This is not social distancing," she said as the hearing started. "I'm here to represent my constituents, but I can't do it in an unsafe manner."

Unfortunately, I had to excuse myself from Committee due to lack of social Distancing and the large crowd that filled the Lincoln auditorium. The crowd was hostile to me but I tried to remind them of the need for civility. Didn’t matter. This is what we have come to.

Wintrow's words drew laughter and yelling from the crowd in the gallery of the Lincoln Auditorium. The lawmaker fired back, calling the heckling "really appalling."

"I have never lambasted any of you and it's essential we remain civil," she said before leaving the hearing.

Some lawmakers wore masks Monday, but many did not.

Little said during a Friday press conference about the state's coronavirus reopening plan that he hoped members of the Legislature would wash their hands, wear a mask, and practice social distancing during the special session, but stopped short of saying he would enforce those precautions.

"That really is the jurisdiction of the Legislature, they govern themself," the governor said.

Senators voted to introduce a bill regarding the creation of "vote centers" for in-person voting as well as another that deals with absentee voting. The bills are focused on the upcoming November election, and the challenges to that process created by the coronavirus pandemic.

On the House side, lawmakers advanced four bills dealing with limiting liability connected to the pandemic. The only proposed legislation voted down was a bill from Rep. John Gannon, D-Boise, which would not have given schools immunity from being sued by parents, teachers, or other Idahoans over their handling of the virus.

The six introduced bills will move forward to full hearings, with testimony.

The last special session in Idaho happened in 2015, after legislators adjourned for the year without continuing the state's participation in a treaty that makes it possible for people in Idaho to collect child support owed to them from parents in other states and countries. Lawmakers opted back into that agreement during the special session.

A handful of lawmakers who said they wanted to call a special session over Little's handling of the pandemic gathered at the Statehouse earlier this summer, but failed to reach a quorum and left without taking any action or votes.