Should voters decide who controls roads in Ada County?

BOISE -- The snow and ice from our historic winter haven't even completely melted yet, but there's already a discussion in the works about changing who is in control of Boise's roads. 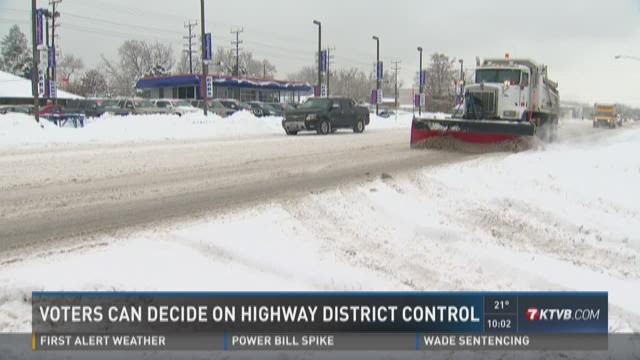 BOISE -- The snow and ice from our historic winter haven't even completely melted yet, but there's already a discussion in the works about changing who is in control of Boise's roads.

Roads in Ada County are not controlled by the individual cities, but rather the county-wide highway district, ACHD. The district has received both applause and backlash for the way it's handled snow removal.

Now, a Boise City Councilman says it should be up to you, the voters, to decide who's in control.

This record-breaking snowfall has caused major issues on roads across the region, and has posed challenges for snow removal crews. It led to Boise Mayor Dave Bieter saying the city should take back its roads from the Ada County Highway District.

MORE: Bieter says it's a failed system when the city is not in charge of its roads

Boise City Council member Scot Ludwig sent KTVB his opinion piece - also supported by council member T.J. Thomson - titled, "Let the voters decide this 'dust up'" in which Ludwig says the issue of who controls roads in Ada County should be up to the voters of each city.

Snow removal efforts are the catalyst of the latest clash over road control between the city of Boise and ACHD.

"It's an extraordinary weather event," ACHD Commission President Paul Woods told KTVB. "We should all be working together. When we get through this we can have this discussion. I think that's the appropriate time to do it."

Woods says it is, in fact, up to the voters to decide who is in charge of their roads, but state law does not allow individual cities to opt out.

"It was created as a county-wide district so it would have to be a vote of citizens of the county."

The highway district was voted into existence by the Ada County residents in 1971, and it can be undone by the voters as well.

"There's a process in state law that has been there for some time that citizens or cities can initiate and the community can decide on that," Woods added.

A concept that some people in the county are in favor of.

"We should have control over who controls our roads," Boise resident Sarah Decamp said. "I would vote for the city to control the roads."

"Their lack of funds, maybe, and lack of manpower and lack of trucks... I mean, give it back to Boise and let them do a better job. I think it's a good idea," Boise resident Jim Harper said.

Others feel ACHD is doing great with the resources they have.

"I appreciate the job they're doing considering the crazy amount of snow we're getting and just trying to maneuver," Boise resident Dominique Etcheverry said. "We live in a place of four seasons and winter. So I'm OK with everything."

The dissolution process requires 10 percent or more of voters in each of the county commissioner sub-districts sign a petition to get the item on the ballot. Then it would take a majority of votes in a general election to dissolve it.

"I think the district is always open to looking at what the community thinks about how we're providing the service and whether or not there should be another form," Woods told KTVB.

Councilman Ludwig is not necessarily agreeing or disagreeing with Mayor Bieter in his opinion piece; Mayor Bieter has said for years that cities should be in charge of their own roads because there will be more accountability.

Ludwig says this in his opinion piece:

"As a Boise City Council Member, we are tasked with economic development, land use planning and public safety. Perhaps that should include snow removal. There are many times when having control of our roads would enhance decision making and planning. As Commissioner Paul Woods stated in his Opinion Letter (dated January 13, 2017) the “City of Boise can make some good arguments why Boise should control its own roadways.”"

Woods says if cities want to gain control of their roads, he thinks they should produce a budget to back up any claims that they can do it better or cheaper.

KTVB reached out to Council Member Ludwig several times on Wednesday and Thursday for this story, but he wasn't available to go on camera.

We would love to hear from you on social media about what you think should be done with Ada County roads.