500 people showed up to participate in the 5k "Miles of Remembrance" run and reflect on what 9/11 means to them. 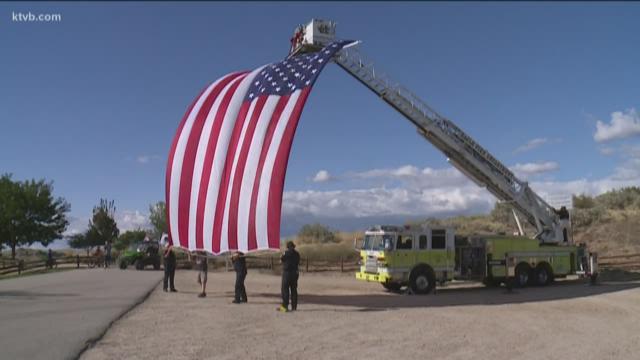 EAGLE, Idaho — Eighteen years ago, America was changed forever when terrorists struck the World Trade Center in New York City and the Pentagon in Washington, D.C.

Sept. 11, 2001 has become synonymous with the phrase "Never Forget" and hundreds of memorial 9/11 events happened all across the nation - including several in the Treasure Valley - on Wednesday in honor of the 18th anniversary of the attacks.

One local event was the second annual 5K "Miles of Remembrance" run at the Eagle Bike Park. This year's turnout saw about 500 people - more than double last year's turnout.

Many who participated remember how they felt when they heard the news of the attack.

“Shock and awe," said Darren Bordeaux. "Couldn’t believe it was happening on our homeland.”

Diane Carlisle, whose husband is a military veteran, says she remembers she was in a class learning to process claims when she heard the news.

"The only think I could think of was, ‘Oh my gosh, this can’t be happening,’" she said. "None of us knew what was going on but immediately I started to cry.

“I think what sticks out the most is all of the dust and everything from when the towers fell and seeing all those people running and trying to get away from it and couldn’t,” Carlisle added.

9/11 "Miles of Remembrance" run in Eagle

1 / 9
Misty Inglet/KTVB
500 people showed up to Eagle Bike Park on Wednesday to honor the 18th anniversary of the 9/11 terrorist attacks.

Bordeaux said he was living in Denver, Colorado at the time. He remembers vividly the planes going into the Twin Towers and then the buildings falling. Then another thought hit him.

Willie Stewart said he was working in California and saw it all unfold on TV. One of the most poignant memories for him is the goodbyes to loved ones.

“When you watch people make their phone calls from the 86th floor and saying goodbye and then the love," he said. "Those phone calls have been relayed to me over the years and I’ve read some of the conversations and it was all love on one of the worst days in American history,” he said.

The "Miles of Remembrance" run was organized by Mission 43 - an Idaho nonprofit group that helps post 9/11 veterans and military spouses.

Mission 43 Director Bryan Madden says he was a junior at West Point when 9/11 hit.

"We were all going to be Army officers, but that day it changed from a peace time military to a war time military,” he said.

Madden said they came up with the idea for a run because they wanted to find an "honorable and active" way for people to remember 9/11.

As part of the run, a timeline of the events of September 11th were posted along the route so people of all ages can remember.

“I think American citizens crave events like this especially in these times of division and this is a time when we all come together,” Stewart said.

When it comes to 9/11, Bordeaux said that phrase "Never Forget" couldn't be more important.

“It means we can’t forget," he said. "We lost a lot of good people, lot of good first responders gave their lives – it’s our commitment, our obligation as Americans to remember.”