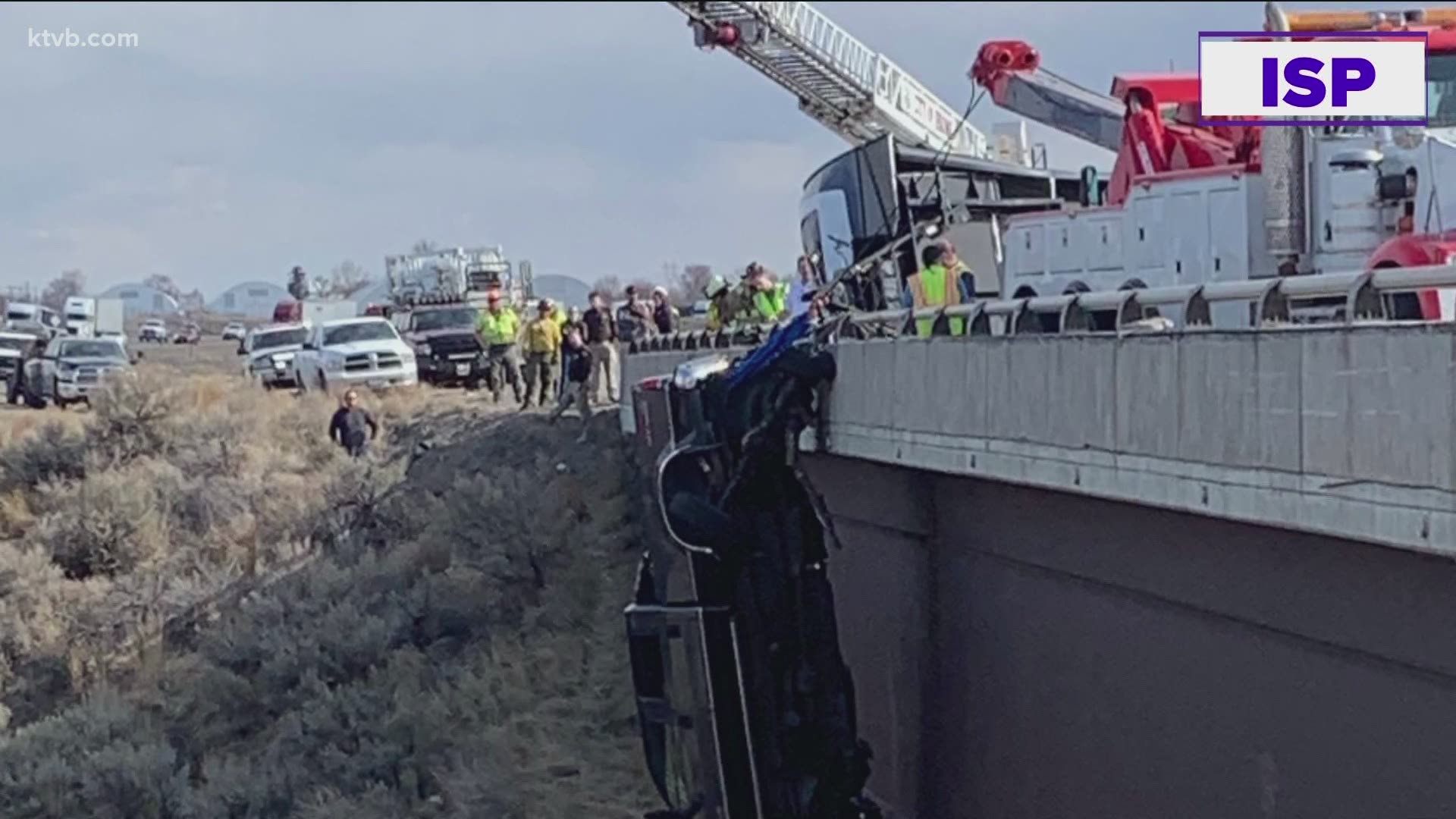 GOODING COUNTY, Idaho — A section of eastbound Interstate 84 southeast of Bliss remains has reopened after a crash and rescue operation at the Malad Gorge.

At about 2:42 p.m., an ISP trooper drove to the scene of the single-vehicle crash near Milepost 146 on I-84. The trooper arrived just as dispatchers were sending emergency units to the scene.

When the officer arrived, the pickup went over the edge of the bridge and was only held by a safety chain connected to a camper. A couple was inside the vehicle as it hung from the bridge.

Witnesses said the driver of the pickup lost control and swerved right, hitting the right shoulder of the interstate. That initial hit caused the truck to slide on the left guardrail and ultimately tip over the bridge. Only the safety chain attached between the truck and camper prevented the couple from falling into the gorge.

The officer was able to call to the occupants of the vehicle, a 67-year-old man and a 64-year-old woman both from Garden City. A Gooding County Sheriff's Deputy and the responding trooper were eventually able to get another set of chains and attach them to the pickup. This provided extra strength to hold the pickup in place until rescue crews arrived.

Once a full emergency team arrived, members of the Magic Valley Paramedics Special Operations Rescue Team (SORT) were able to reach the pickup and attach a harness to each victim, pulling them to safety.

The couple was taken to a Magic Valley hospital and treated for non-life-threatening injuries. Two small dogs were also in the vehicle and were brought to safety as well.

"This was a tremendous team effort that took a quick response and really showed the dedication and training of our community of first responders," said Capt. David Neth of the Idaho State Police District 4 in Jerome. "This is something we train and prepare for, but when it happens and people's lives literally hang in the balance, it takes everyone working together, and then some."

"ISP thanks all the fast responding, quick thinking local rescue agencies who responded to the call for help," the agency said in one of its Twitter posts.

That section of I-84 has since reopened.

Credit: Idaho State Police
Emergency responders at Malad Gorge bridge March 15, 2021, after a crash in Gooding County, Idaho. Traffic on eastbound Interstate 84 into the Magic Valley was being rerouted onto U.S. Highway 30.

Further details about the crash are not yet available. Check back for updates on this developing story.

Eastbound I-84 will remain closed for some time as the effort continues to clear the scene and ensure the highway is again safe. ISP thanks all the fast responding, quick thinking local rescue agencies who responded to the call for help.
Updates released as info comes available. https://t.co/PWe8jzZXm3