With more than 4,200 bridges to inspect around the state, Idaho Transportation Department crews have their work cut out for them year-round. 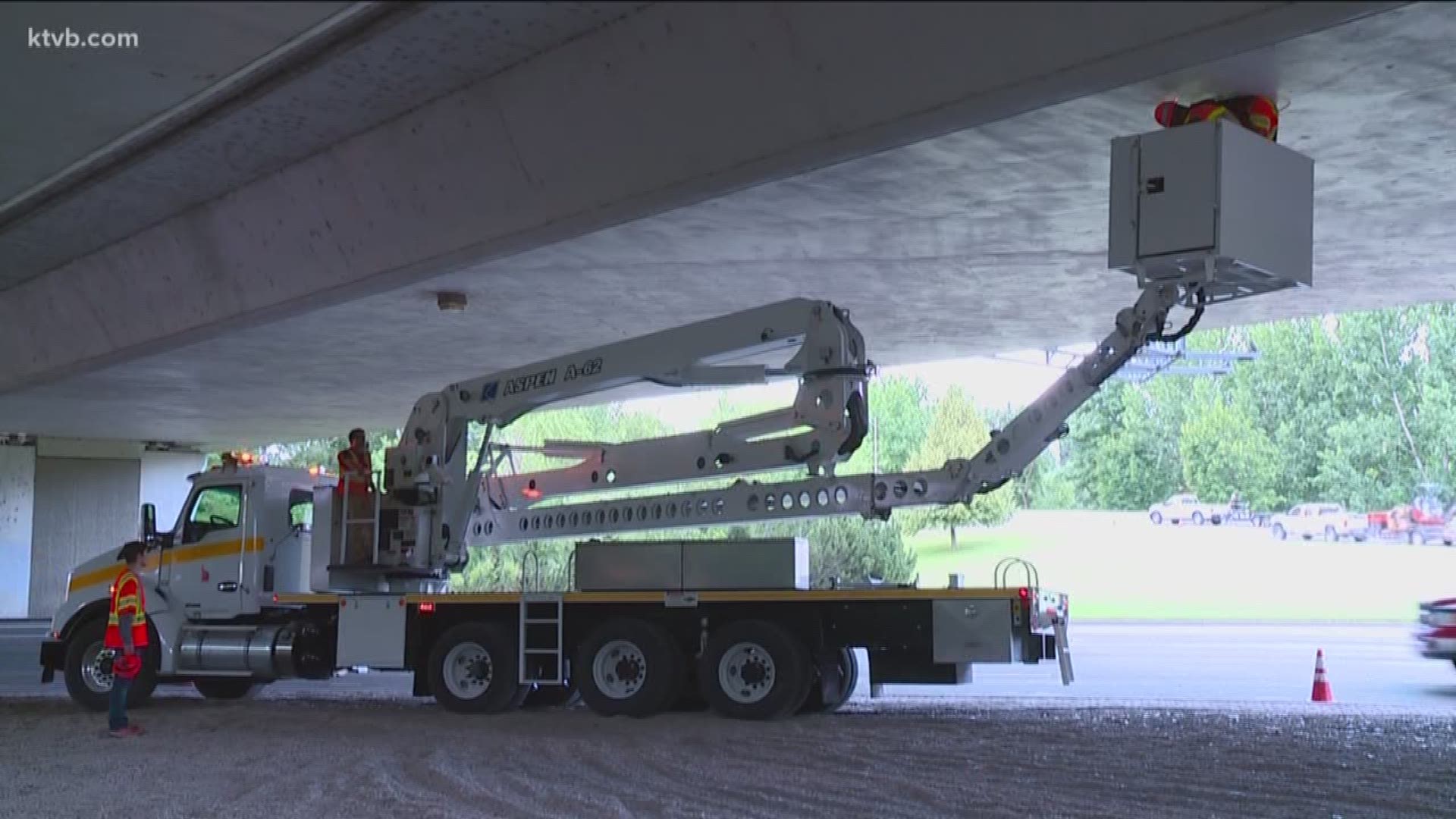 The Idaho Transportation Department will be working on bridges throughout the Treasure Valley this summer.

Meanwhile, ITD crews continue to do preventative care and inspect bridges across the Gem State. With more than 4,200 bridges to inspect around Idaho, they have their work cut out for them year-round.

"ITD inspects not only bridges on the state highway system, but all the bridges in Idaho," Idaho Transportation Department Public Information Specialist Jake Melder said.

Bridge inspectors spent hours working under the Connector along Fairview Avenue on Tuesday, checking out structures with their under-bridge inspection truck (UBIT). Crews conduct visual and more in-depth UBIT inspections in places that are harder to reach, taking note of everything they see.

Kenny, the department's new Kenworth A-62 under-bridge inspection truck, is making its way through the Treasure Valley right now. Kenny has an arm with a bucket that extends 62 feet; with its help crews can get up under, around and in substructures of bridges in areas that cannot be seen from just a visual inspection.

That allows inspectors to examine hard-to-reach areas and every inch of a bridge's underside for deterioration, signs of stress, and recommend maintenance work if needed. Some maintenance concerns include fatigue cracking and loose bolts.

"If there is something serious we call it a critical finding and we do our own little report for that and let the maintenance guys know right away that it's out there," Litchfield added.

ITD has something fun going on to showcase their workers: if you see Kenny out there while it's in the area this week, they want you to safely snap a picture and share it on social media using the hashtag #CatchKenny. The UBIT will be moving on to eastern Idaho and northern Idaho after this week.

KTVB's Morgan Boydston went up with bridge inspectors into what is called the "deck" of the bridge.

"We're looking for basically any defect that didn't happen at construction, so most of it is going to be little cracks in the concrete," Litchfield said.

ITD says they inspect most bridges every two years, while some are inspected every four years. If needed, bridges are inspected more often, Melder says. Inspectors found about three percent of the state's bridges are structurally deficient.

"We do an objective grade based on the conditions they are today, not necessarily just age of the bridge," Melder added.

If any sections of a bridge are rated poor, they consider it structurally deficient on their 0-to-9 scale.

"That doesn't mean it poses a danger to the public but rather we just need to pay special attention to it and likely at that point in time we are going to try to find the funds to start replacing that bridge," Melder said.

He says they want to catch things before they grow to become problems, like a hole that popped up in a bridge on I-84 near Blacks Creek Rd.

"Maintenance is a lot cheaper than having to do full-blown replacements. So by being preventative, by having regular inspections, we can catch deterioration early and do a patch, which is much more cost-effective for the taxpayers," Melder said.

With an estimated infrastructure budget shortfall of $400 million across the state every year, ITD says bridge inspections and maintenance are a perfect example of trying to stretch Idahoans' dollars further.

"We do know that there are needs - outstanding needs - that exist in our system, whether that's adding lane miles where there's a lot of congestion to improve safety and mobility in those areas or it's maintenance of our roads and bridges," Melder told KTVB.

Bridges built in the 60's and 70's were designed for a 50-year life, meaning the Transportation Department has to keep close tabs on them. As of the mid-1990's, the American Association of State Highway and Transporation Officials update its code for building bridges and bridges are now designed for a 75-year life.

"Most of our bridges were built in the '60s or '70s when the interstate system came through. So we are going to see a continuation of more and more bridges hitting that 50-year life cycle. So funding, of course, is a very serious situation," Melder added.