Massive boulders crash down on highway overnight near earlier rockslide

The Idaho Transportation Department says the area on US-95 is still unstable and unsafe for traffic as well as rock removal crews. 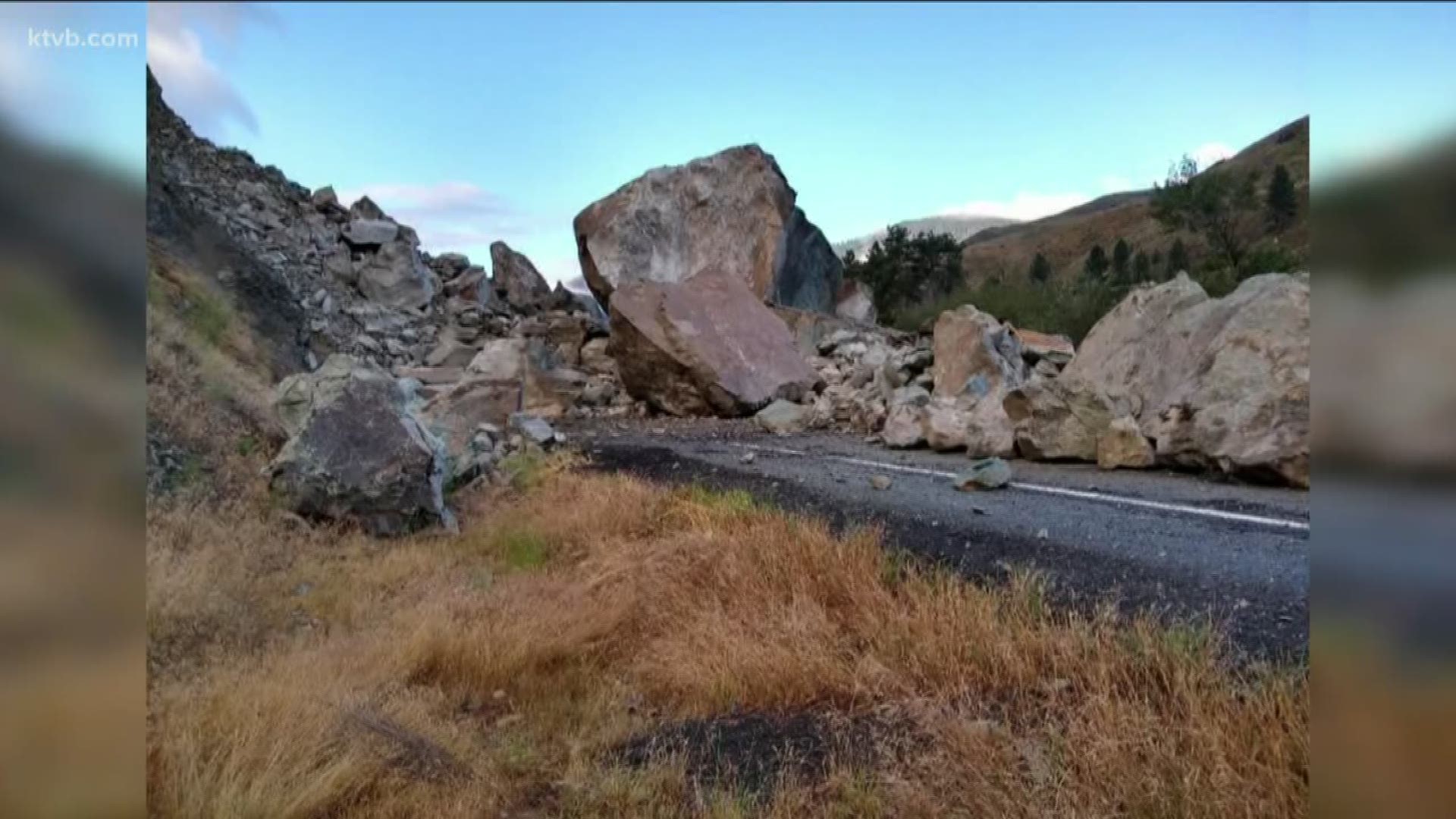 RIGGINS, Idaho — US Highway 95 will be closed for even longer after huge boulders broke off of the hillside above and crashed down on the roadway south of Riggins, the Idaho Transportation Department said.

The rockfall happened in the same location as a major rockslide that blocked the road earlier this week, burying the highway in a debris field 120 feet long and 40 feet deep.

ITD says the new slide happened sometime overnight Thursday into Friday morning. It's unclear whether a series of overnight earthquakes - the strongest of which hit near Stanley shortly after 2 a.m. Friday - had any effect on the latest movement.

But ITD spokeswoman Jessica Williams said officials had already seen movement on the slope before the quakes happened, and were concerned that more rocks could fall.

ITD crews had built a temporary gravel road to get traffic around the area of the slide, but more rockfall on Wednesday covered it, forcing them to close the highway once more.

Right now, the area is very unstable and too dangerous for rock removal crews to get into the area, Williams said. ITD will need to assess the area before they can begin clean-up operations.

“The highway will remain closed until we are able to evaluate this new development and determine the best option to safely stabilize the slope.” Operations Engineer Jared Hopkins said in a release.

Hopkins said the newest slide activity underscored that shutting down US-95 to traffic was the right move.

RELATED: University of Idaho geologist discusses cause of rockslide near Riggins

“The extensive rock fall that occurred last night confirmed that we had made the right decision to completely close that portion of US-95 to traffic,” he said. “Currently there are a lot of overhanging boulders and ledges. We don’t yet know how stable these are and until we are able to further evaluate the area, crews will not be able to engage in rock removal operations.”

The public is asked to stay away from the slide area.

Drivers traveling through the area can detour on Old Pollock Road during the daytime. The road will be open from 7 a.m. to 9 p.m. MST with flaggers, and closed at night for crews to perform maintenance. Because of the highway shutdown, Old Pollock Road is getting significantly more traffic than normal.

Travelers should not use French Creek Road as a detour unless they have a high-clearance vehicle, four-wheel drive, and are very experienced with mountain driving. French Creek is a very challenging narrow and rough dirt road with dropoffs of more than 1,000 feet and limited pullouts. The road is not suitable for any vehicle pulling a trailer.

The Idaho Transportation Department does not have an estimated date when the highway will be reopened. Updates will be released as they are available.

“The proven unpredictability of this slide requires that we remain flexible,” Hopkins said. “While our goal is to safely reopen the highway as soon as possible, we are very thankful that no one has been injured and will focus our efforts to ensure that it remains that way.”