PORTLAND, Ore. -- Cleveland High School awarded a diploma to a 100-year-old former student who was never able to graduate. 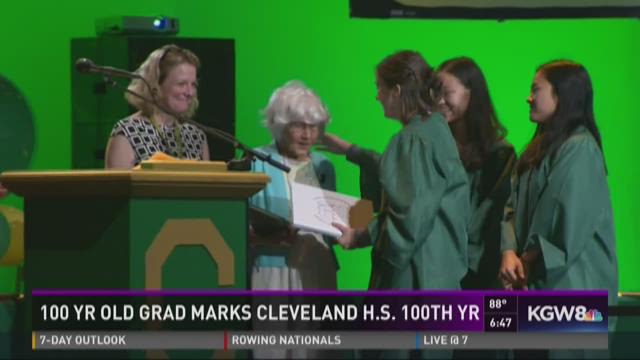 PORTLAND, Ore. -- Cleveland High School awarded a diploma to a 100-year-old former student who was never able to graduate.

"What makes this even more special is that the school is also celebrating its 100th year," explained principal Tammy O'Neill.

Leah Vogel Hahn finished her sophomore year but had to work in the hop fields to help support her family during the Great Depression.

"It seems every year I started later and later because of the harvest," Leah remembered. "It was very discouraging."

She went on to work at American Can Company for 22 cents an hour and eventually earned better money at the shipyard.

"Those were her Rosie the Riveter days," said her daughter Becky Monteith.

"I did like grammar school, my mom used to say 'she's so smart,'" said Leah. "For so many years, I've had regrets about not finishing high school."

Her daughter contacted Cleveland about the honorary degree and she says administrators exceeded every expectation.

On Friday, Leah received her diploma in front of this year's graduating class,

"To see those students stand up and honor her was awesome," said her daughter.

"She's a great example of adapting to life when change comes your way," said student Quinn Gonzales. "She's a real inspiration to all of us graduating this year."