We looked at some of the data that played into WalletHub's study, and experts and working moms told us these are all issues Idaho families confront on a daily basis. 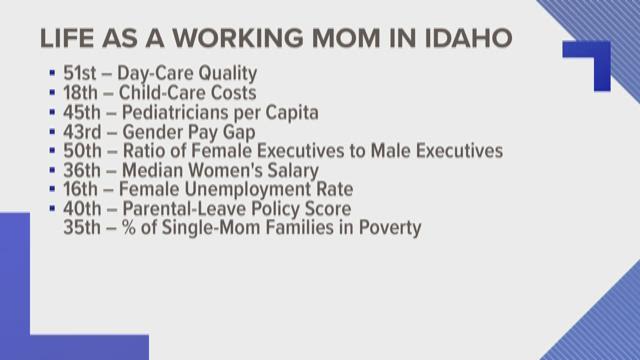 BOISE -- We hear about Idaho topping national lists all the time, but this week we're talking about one list Idaho didn't score so hot in; in fact, we got dead last.

A recent WalletHub study put Idaho 51st in the country for working moms. WalletHub compared attractiveness in each of the 50 states and Washington, D.C., for a working mom based on 15 metrics. They based it on factors such as day-care quality, gender pay gap and median salary for women.

On Wednesday, we heard from a number of working ladies that this ranking isn't actually very surprising. But it might be for many of you. Here's a look at some of the data that played into WalletHub naming the Gem State the worst state for working moms:

Those are just some of the statistics, and KTVB spoke with experts and working moms who say these are all issues Idaho families confront on a daily basis.

"I am really supported by my employers and I have a wonderful spouse who helps out with children," local mother of two, Ashley Jackson, said. "Without him, childcare would be impossible. We absolutely would not be able to afford childcare."

"As a working mom I've been really lucky," another mom of two, Gloria Miller, said. "My husband and I have been lucky where our work schedules have been at opposite times of the week so he's always with the kids or I am."

While they say they're fortunate, these moms understand why this study drops Idaho at the bottom of the barrel.

"In my experience with friends it is a struggle, it's a struggle to find that balance," Jackson said.

But Jackson says they have had to make sacrifices; her husband stayed at home for five years to raise her little ones while she pursued her passion. Now, he's working part-time at night and she's working full-time during the day, with her parents watching her daughter for a couple hours in between and her son attending the Boys & Girls Club.

"It's definitely been a challenge. It's tough for our kids, for instance, not having both parents together, not having family dinners," Jackson said through tears. "Just having that family dynamic disappear is rough."

"A couple of my friends who've had to quit they've made the decision that it's easier and more cost-effective for them to quit their job and stay at home with their kids than it is to work and then have to pay childcare. For some of them it just ended up being a wash," Miller added.

"Idaho has not evolved as many other states have in terms of supporting women in the workforce. If you look at our businesses, if you look at our legislature, if you look at a lot of industries that are prevalent in Idaho, there are a lot of men," Executive Director of Idaho Association for the Education of Young Children, Beth Oppenheimer, told KTVB.

Women make up nearly half of the United States workforce but earn significantly less than men and have less upward mobility.

"Our workforce fundamentally has shifted over the last 50 years: more women are working than ever before. Unfortunately, what happens with that is the workforce supports have not shifted or changed," Oppenheimer said. "We can't have a strong workforce without quality affordable childcare."

"And then on top of that we see women making less wages than men, which plays into this whole vicious circle of supports for working mothers," she added.

As the WalletHub study shows, every factor is intertwined: from childcare, to women's median salary and the gender gap, and from women in leadership or executive roles to parental leave policies.

In the methodology section of their report, WalletHub says: "In order to determine the best and worst states for working moms, WalletHub compared the 50 states and the District of Columbia across three key dimensions: 1) Child Care, 2) Professional Opportunities and 3) Work-Life Balance." (Read about how researchers came to their overall scores and results based on 15 relevant metrics, their weights, and weighted averages here.)

Researchers say Idaho has the worst daycare system, we're ranked 48 in professional opportunities, second to last in female executive-to-male executive ratios, but our work-life balance score is above average.

When asked if she feels women have to sacrifice more than men, Miller responded:

"Oh, absolutely, yeah. I mean, even when it comes to starting a family, maternity leave and then coming back to work. And you know having to decide whether or not you're going to do childcare. I think females are definitely under a lot more pressure."

But all women we spoke with say this study isn't doom and gloom; they know there is hope for Idaho and working Idahoans.

"I'm hopeful this is just another way of highlighting an issue that needs to be looked at," Oppenheimer said. "It alerts us to the fact that this is something we should be looking at."

"Not surprised [by this report] but I know we are making strides to do better so I feel hopeful," Miller added.

A lot of local businesses are making it easier for working moms; they have daycare in house or flexible policies. And women are still making strides in industries across the nation and here in the Gem State.

Nevertheless, Oppenheimer says it's up to individual businesses, government and non-profits to come up with a better solution

Is this ranking shocking to you or not? Let us know in this story on our KTVB Facebook page.