The protester was hit in the head by what appeared to be an impact munition; he is in serious condition at a local hospital. 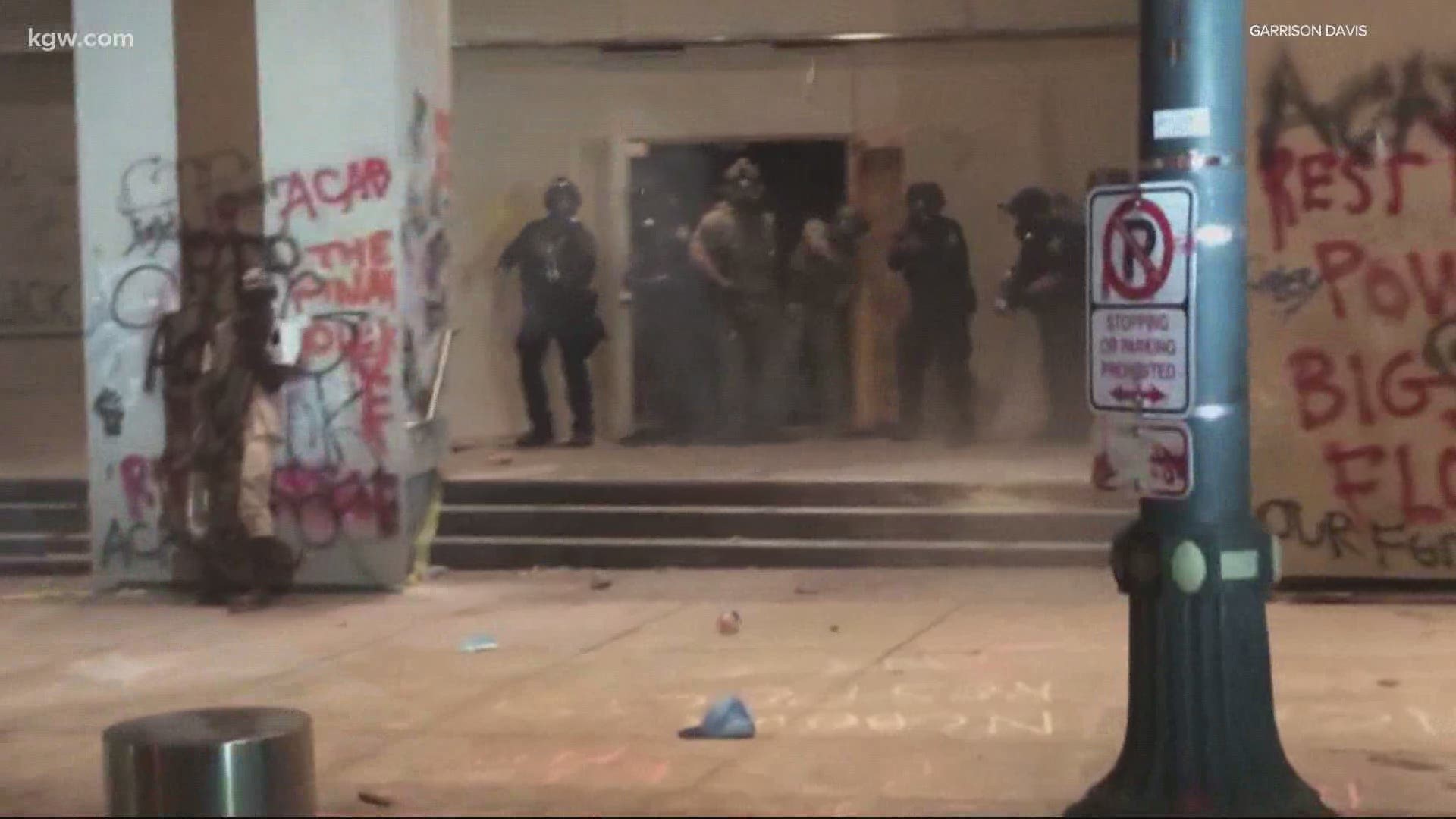 PORTLAND, Oregon — A Portland protester was badly hurt  Saturday night after being shot in the head with a crowd-control weapon, video shows. The weapon was fired by a federal agent stationed outside the Mark O. Hatfield U.S. Courthouse.

Video on social media from Tomas Morales IV shows LaBella was standing across the street from the federal courthouse when the incident happened. He had his arms raised above his head and was holding what looks like a large black speaker.

The video shows a federal officer throwing a canister that lands near the man. He first tries to kick it away, then picks up the canister and tosses it back toward  the courthouse.

This appears to be the moment that #Portland protester was struck in the head and suffered a gruesome injury. pic.twitter.com/Na1h5BUaAO

He then raises the speaker above his head again, with both hands. He is wounded shortly afterward. You can hear the sound of the shot on video, and LaBella immediately falls to the ground.

Other protesters surround the man and he is carried away from the area, another video shows. He was bleeding heavily from the head, and a significant amount of blood could be seen on the sidewalk after he was carried away. 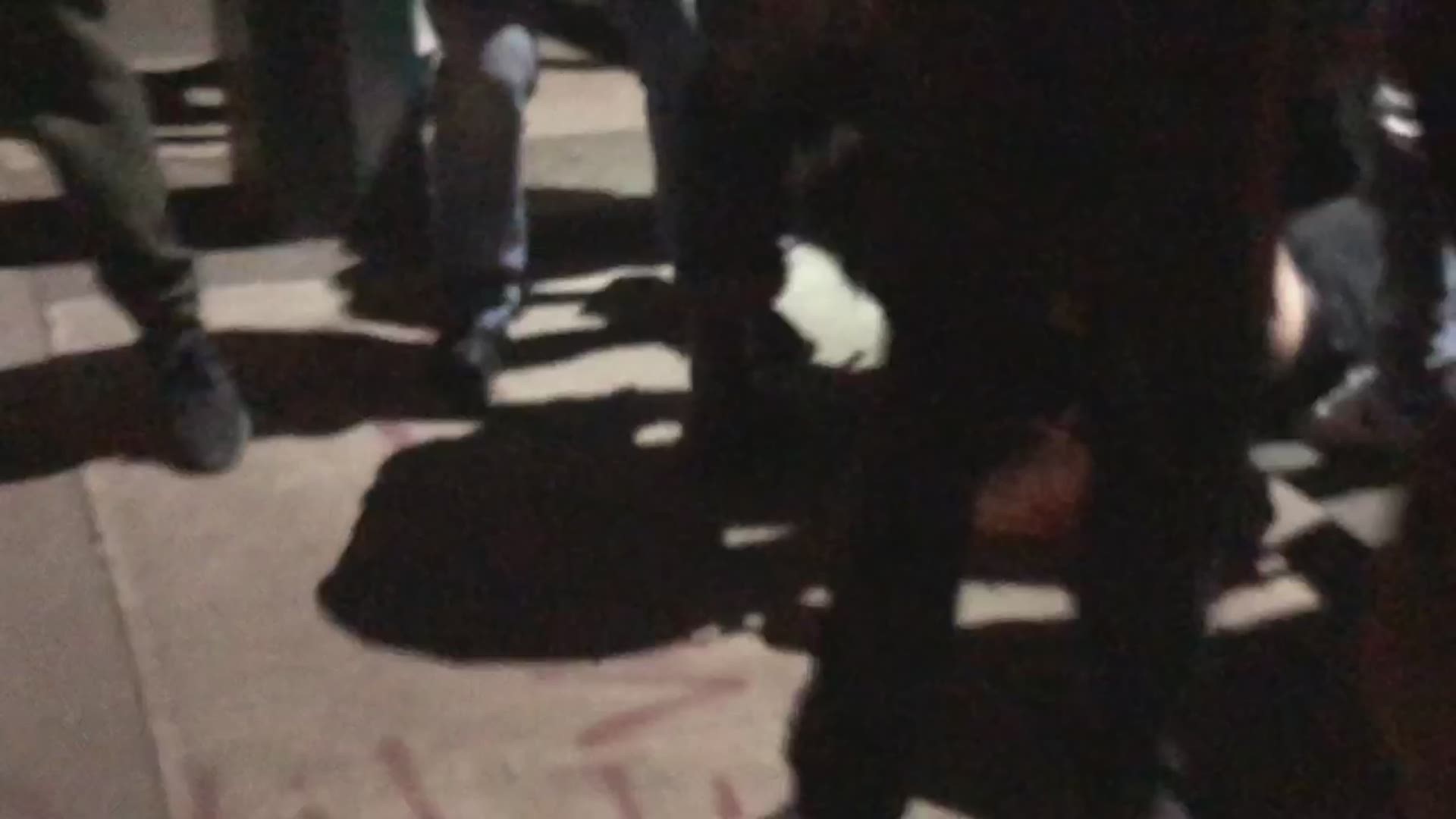 Last month, the Department of Homeland Security deployed federal officers in tactical gear from around the country to protect federal property and monuments in Portland and several other cities.

On Friday, President Trump talked about deploying federal agents to Portland. At an event he told Acting DHS Secretary Chad Wolf about the protests in Portland and claimed that local police couldn't manage the protests themselves.

"It was out of control, the locals couldn't handle it, and you people are handling it very nicely," said President Trump.

MAYOR TED WHEELER: 'THIS SHOULD NOT HAVE HAPPENED'

Mayor Ted Wheeler, in a statement, said the U.S. Marshals Service will be conducting a full investigation of the incident that led to LaBella's injury.

He also called on federal officers to follow directives given to Portland Police regarding the use of CS gas and other crowd control munitions.

Here is the full text of his statement:

A person was seriously injured in Portland last night. This should not have happened. I spoke with U.S. Attorney Bill Williams about the injuries and learned that the U.S. Marshals Service will be conducting a full investigation. I am calling on the federal government to be thorough and transparent with their findings. I’m concerned that the actions of federal officers last night escalated, rather than de-escalated, already heightened tensions in our city.

We are now more than a month and a half into witnessing nightly violence on our streets. Portland continues to be used as a staging ground for violence night after night. This is causing unprecedented harm to our communities, livelihoods, and Portlanders continue to fear for their safety. My main concern is this: that the continuing violence will lead to further injuries or even deaths. Nobody in Portland wants to see that happen. That is why I put into place restrictions on the Portland Police Bureau, limiting the use of CS gas and LRAD to only life safety situations. Portland Police Chief Lovell knows my direction and expectation of the bureau: to end the nightly violence as quickly and safely as possible. I am calling on the federal government to adhere to the same directives as our Portland Police Bureau when it comes to crowd control munitions.

I am also calling on our city, county and federal partners as well as our entire community to join me in our call to move our city forward in peace so that we can begin the necessary work of rebuilding, reforming, protecting our community from a global pandemic, and dismantling systemic racism. We must end this nightly violence in Portland. Lives are at stake.

Several other city and state leaders said Sunday that enough was enough.

Portland city commissioner Jo Ann Hardesty said in an email that she "absolutely condemn(s)" federal troops' presence in Portland and demands their withdrawal.

"We have had more than enough. The federal troops need to withdraw immediately, and after that we have the hard task of picking up the pieces and responding to what the public and this movement asks of us," Hardesty said.

The consequences of Donald Trump unilaterally dispatching fed’l law enforcement into U.S. cities played out in Portland w/a peaceful protester shot in the head. Trump & Homeland Security must now answer why fed’l officers are acting like an occupying army https://t.co/tnLz0nddGw

In a statement to KGW, Governor Kate Brown said, "The events of last night at the federal courthouse were the tragic and avoidable result of President Donald Trump, for weeks, continuing to push for force and violence in response to protests. The cycle of violence must end. President Trump deploying armed federal officers to Portland only serves to escalate tensions and, as we saw yesterday, will inevitably lead to unnecessary violence and confrontation."

They responded to Southwest Main and Southwest 3rd around 2 a.m. Sunday after federal officers called for backup. Police made announcements asking protesters to leave and closed the area bordered by Southwest Naito Parkway, Southwest Broadway, Southwest Columbia and Southwest Harvey Milk due to "criminal activity."